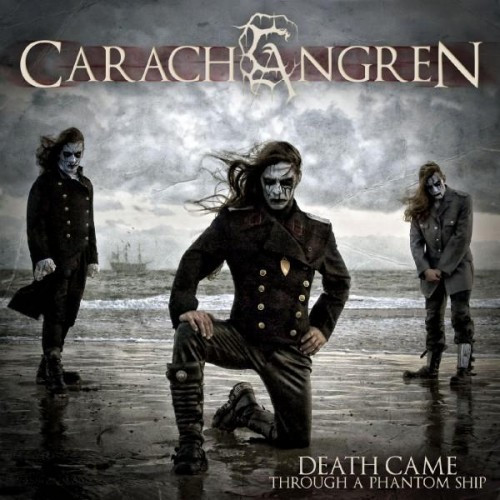 [EDITOR’S NOTE: “Death’s Embrace” is the nom de guerre of one of our most loyal readers, who’s been with us since sometime in the last geologic epoch. Or at least since last November when we started NCS. Anyway, he has a Top 10 list, and now we have it, too, along with his recommended songs from each album. Read on . . .]

These are the albums that got the most replay on my Ipod. And for a couple of albums, I just had to keep coming back to them over and over. They were so good in my mind that I just couldn’t replace them with something else. I also added some links to my favorite tracks off of each album. I am sure that most of you will have some issues with my choice for the best album of the year, but I can’t get it out of my head. I listen to the whole album, beginning to end, at least three or four times a week. It never gets old.

I could not narrow my list down to ten, so first, here are my honorable mentions for 2010:

This Canadian band has put out a solid album that treads the line between deathcore and true death metal. I think this young band is showing lots of promise. It will be interesting to see how they develop and where they go from here.

Hopefully, these Italian masters of brutality have been able to work through the issues that plagued them at the beginning of the year. These guys are right up there with Fleshgod Apocalypse in their ability to create excellent technical death metal.

I really struggled with putting this album in my top 10. I really like this album, and the strength of it to me lies in “Gateways”, “Ritualist”, and “Dimmu Borgir”. These three songs are so good that I just can’t let this album go. The symphonic arrangements are top notch, and I’m a sucker for good orchestration.

Speaking of being a sucker, I am a sucker for great technical death metal, and this album fills the bill nicely. I have read some reviews in which the authors thought this album wasn’t as a good as it could have been, but I feel this is a great effort.

What can you say about Nevermore? They consistently put out excellent albums. The argument could be made that there is not a better duo in metal than Warrel Dane and Jeff Loomis. Warrel’s vocals are flat out amazing and Jeff is in the discussion as the best guitarist in metal. I love this band, and every album that they put out will be in my collection.

Another great album by the practioners of Northern Hyper Blast. These Canadians just keep knocking their stuff out of the park. The video for “Push the Venom” just might be the best thing about this album. The world could use more fallen angels in metal lingerie. The best metal video of the year.

One of my favorite Swedish death metal bands, these guys just love to write songs about zombies. And Infected does not disappoint. The boys don’t do anything flashy, they just play a great brand of old fashioned Swedish death metal and they do it very well. And when you write a chorus that begins with the lyrics, “Into the pit…..your blood will drip”. . . . It may seem ridiculously simple, but they work and they work ridiculously well. And that opening riff hooks you and will not let go. “Into the Pit” is a crushing death metal offering, and it is my favorite off the album.

05. Son of Aurelius – The Farthest Reaches

Another tech-death metal band, hailing from California, Son of Aurelius released a  freaking outstanding debut album that sounds liked it was released by seasoned veterans. Everything about their sound has me coming back for more. When was the last time you heard flamenco-style guitar playing in a death metal band? I sure as hell don’t remember hearing it recently. This super-talented young band is going to be interesting to watch develop and grow. I can’t wait til they release their next album.

Ahh. Aeon. These guys love to tear Christianity a brand new bloody fucking asshole (I love that about them), and Path of Fire is no different. Tommy Dahlstrom and company have released another ear-busting, brain-exploding death metal album. Aeon is just great fucking Swedish death metal.

In my opinion, these guys are very underrated. They have put out back-to-back-to-back excellent albums. Now I have to admit that “Dragon Iconography” is kind of cheesy, but it’s infectious cheese and you can’t get it out of your brain. Obsidian C’s songwriting really shines on this album, and the gem of Reptilian is “Dark As Moonless Night”. It is depressing and hauntingly beautiful. The orchestration is amazing and the vocals and lyrics are terrific. One of my favorite songs of the year.

I can’t believe I am putting this EP at number two. I have a huge mancrush on FA. If this had been a full-length album, it would have been number one easy. The only problem is that it just isn’t long enough. I have to have more from these brilliant musicians. I discovered them late last year and they have skyrocketed up my list of favorite bands. Needless to say, I can’t wait until their next full-length comes out, to see what direction they choose to follow. I was nervous about FA using clean vocals, but it was so well done in “Thru Our Scars” that it fits perfectly. It raises the emotional effect of the song to a soaring level and leaves you begging for more. And yes, this group has made it onto my must-have list. I will buy everyting they release, just because they are that fucking brilliant.

Speaking of fucking brilliance, this band from the Netherlands (shout out to Niek’s stomping grounds!) has brilliance in spades. I fucking love this album. And fair warning, if you don’t like orchestration or concept albums, you probably won’t like it. If you do, this is a must-have. The vocals are a terrific mix of death metal growls, black metal raspiness and just a touch of clean vocals to round them out. The drumming sounds programmed at times, but I don’t really care. They fit the music perfectly, varying between simple rock beats, double kicks and blast beats. The guitar work is not spectacular, but once again perfectly fits the music. These guys know what the hell they are doing.

What sets this band apart is how well they tell the musical story based on the Flying Dutchman ghost legend. They manage to paint brilliantly clear pictures and amazing atmospheres with their music, and the lyrics and their arrangement are the best I have heard in years. I honestly think that this album could be made into an opera. It’s that fucking great.

11 Responses to “THE DEVIL’S FAVORITES: THE TOP 10 OF DEATH’S EMBRACE”