Dan Swanö is one of those names I associate with excellence in metal. He fronted the influential Swedish band Edge of Sanity (as well as others, including Nightingale), he’s been a member of other excellent metal bands, including Katatonia, Ribspreader, and Bloodbath, and he’s appeared as a guest vocalist or instrumentalist on albums by many others.

In addition to his creative work as a vocalist and multi-instrumentalist, he has for many years run a recording studio in his hometown of Örebro called Unisound, and has been responsible for recording (and/or mixing/mastering) an eye-popping number of albums by the likes of Opeth, Dissection, Marduk, Dark Funeral, Katatonia, and The Project Hate MCMXCIX. Search Blabbermouth using his name for recent news, and you’ll see that he’s scheduled to work on the production of new albums from Asphyx, Coldworker, and November’s Doom, among many others.

Swanö ran Unisound for most of the 1990s, then closed it for several years, and reopened it again in 2005. In 1994, he started a guestbook, where bands with whom he worked would add remarks and Polaroid photos of themselves in the studio. As one guestbook would become filled, he would start another.

Earlier this afternoon we learned that Swanö has arranged for the digitizing of the guestbook for 1996-1997, and he’s made it available on-line, along with his own “liner notes”. It’s fascinating, and after the jump we’ll tell you more about it and give you a link where you can see it for yourselves. 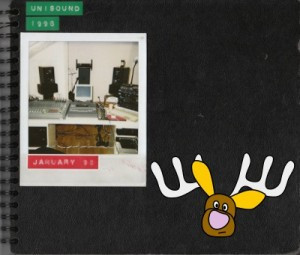 Swanö has written this about the first volume of the guestbook to be published on-line:

“In 1994 I introduced the guestbook at Unisound Recordings.
It quickly became a hit with the bands that recorded with me.
Some members seemed to take their guestbook pages more seriously than their music!

This was an early form of a homepage.
Every band knew that the others would look at their page, and often left messages or insults for the others to read when they returned for another recording.

The first guestbook to be made available to world is from 1996/1997.
It is a bit more luxurious than the previous one (That will be unleashed later in 2011)

Most of the pages have Polaroid photos. The film cost a bloody fortune, but looking back, it was so worth it!

And enjoy it you can by following this link. It includes pages from and about the 1996/97 recording sessions of Edge of Sanity, Opeth, Nightengale, Katatonia, Ancient, and many others. The liner notes and the images form a bit of metal history, and we’re lucky to have it.