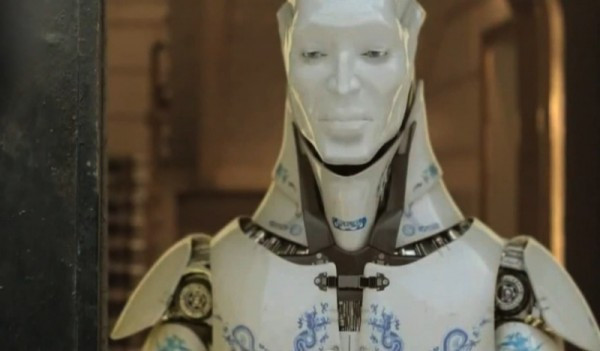 Time for another edition of THAT’S METAL!, where we attempt to entertain you with things that aren’t music but are still metal — as in items that would make you say, “Shit! That’s fucking metal!” — at least if you liked the words “shit” and “fucking” as much as I do.

Usually, we pick wacko news stories for these posts, but today we got on a video kick. In fact, three of our four items are videos. Two of those are visually stunning, and the third one is . . . fucking funny as shit. And the fourth item consist of drink recipes. I just know you’ll want to try them out for yourselves without delay, and then write us with photos and descriptions of the tasting experience. I really encourage you to do that, because there’s no fucking way in hell I’m doing it.

This first item is a short film by Carl Erik Rinsch called “Parallel Lines – The Gift”, which I first saw on the consistently awesome TYWKIWDBI blog. It was made for the promotion of the Philips Cinema TV. Philips gave six lines of dialogue to five filmmakers at Ridley Scott Associates, and commissioned each of them to create short films using those lines. All five were released by Philips last April. “The Gift” is one of them, and the one I thought was the best.

It’s a futuristic piece set in Moscow that involves a robot on the run from the police. It’s amazing to watch, and reportedly spawned a bidding war between several big Hollywood movie studios, including Warner Bros and Fox, who want to turn the short film into a feature. Rinsch is currently developing a remake of Creature From The Black Lagoon and is in preproduction on an “epic period samurai film” titled 47 Ronin starring that great thespian Keanu Reeves.  (more after the jump . . .)

The minimal dialogue in “The Gift” is in Russian, and it will help you non-Russian readers to have the translations:

First, when the man in the hat is at the desk as the gift is unwrapped:

Man in Hat: What is that?
Bearded Man: It’s a unicorn. Never seen one up close before.
Man in Hat: Beautiful.

Then, when the man in the hat is on the street: “Get away. Get away.”

And later, when the robot (or cyborg) is at the bridge: “I’m sorry”.

And those are the same lines given to all the other filmmakers — those lines, and nothing else. It’s fascinating to see the very different stories each filmmaker told using those six lines. I’ve got links to the others after this video, which is fucking metal.

To see the the other four Parallel Lines videos, here are the links. They’re all beautifully made, with very different stories. I didn’t care too much for “Jun and The Hidden Skies”, but the others are way cool.

Jun and The Hidden Skies

After the original five films were made, Philips commissioned another short film, using the same six lines of dialogue, but to be shot in 3D. Here’s a link to that film (in 2D, of course):

And finally, last spring Philips announced a competition, inviting anyone who wished to submit their own short films, using the same six lines of dialogue. Director Ridley Scott chose the grand prize winner, and here’s a link to that film:

Staying with videos, our next item is about dogs. Here at NCS, we’re cat people. We like dogs okay, but don’t have any as pets. Dogs are a little too slavish and a little too much trouble to take care of; avoiding trouble and anything that smells like work is one of the guiding principles of our lives.

On the other hand, dogs will do and have done amazing things, in part because they are so slavishly devoted to humans. This next professionally made video is a montage of truly amazing footage, and the music suits the clips beautifully (though not as well as metal would have done). This thing is seven and a half minutes long, but worth every second, and it’s got a great finish. It is definitely metal. (And thanks once again to TYWKIWDBI for this find.)

Yeah, we prefer cats as pets, but as cat videos go, they’re not in the same league of awesomeness.  They’re more like this:

I think this next one speaks for itself:  Drinks containing . . . mayonnaise

Makes your fuckin’ mouth water, doesn’t it?  (Stole this one from TYWKIWDBI, too.)

Last, but most certainly not least, we have another video. It’s an actual get-out-the-vote advertisement run by the Catalonian Socialist Party on Spanish television in advance of parliamentary elections in November. The tag-line at the end, in English, says “Voting Is A Pleasure”. As you’ll see, it was certainly a pleasure for this chick.

I wish ads like this would run as public-service announcements on American TV. You could use this same kind of theme for all sorts of things besides voting — completing your census forms, wearing your seat belts, being more eco-friendly, etc. It would certainly make me pay closer attention.

Fuck, I’m surprised U.S. commercial advertisers haven’t already boarded this train. They certainly want us to think that buying their shit will cause us all to come. They just haven’t yet gotten quite this explicit.

Pretty fucking metal, if you ask me.

Well, that’s it for this edition of THAT’S METAL! Enjoy the rest of your fucking day, and shit.