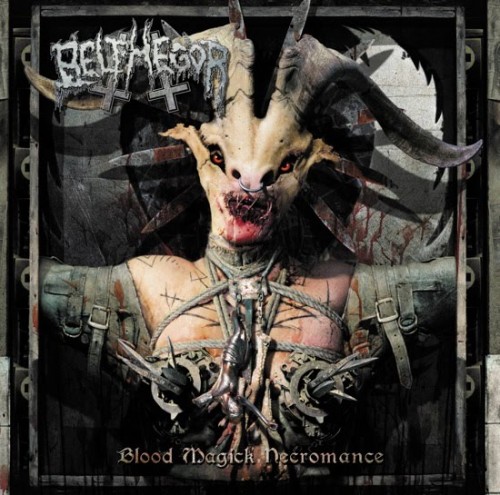 Well, the 9th album by the real Austrian death-machine is finally here. Immediate impressions are favourable, I’ll grant you that, but really what does one expect from a band like Belphegor whose past releases have all shared the same blast-frenzy?

For one thing, I’d say the sound is more “blackened” in several ways than either of their previous two releases, the guitar tone a little sharper and less “thick” than previous album Walpurgis Rites, the cutting riffs acting more like a scalpel than a bludgeon this time around. There is also a much more refined use of melody, on almost all of the tracks, that adds a sense of atmosphere.

This approach clearly stems directly from Bondage Goat Zombie and Walpurgis Rites (which could be considered the start of a new chapter for the band), but the overall feeling of the new record is of a far more agile and dangerous beast.

Whilst the “chunkiness” of the previous two records may be mostly absent, the song-writing incorporates far more subtlety and nuance (well, as far as a Blackened-Death metal band with an obsession with Satan and Sado-masochism can be considered subtle and nuanced) and uses many of their own familiar tropes in new and interesting ways. The differences in production and tones also allow a wider emotional palette to be invoked and the whole record feels arguably fresher and more supple.  (continued after the jump . . .) 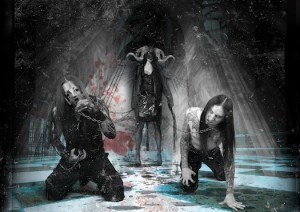 “In Blood – Devour This Sanctity” is a remarkably considered and (dare I say it) clever song to open with, flitting sinuously between blast and groove, whilst maintaining a more overall Black Metal feel than some of their most recent material. The careful use of layered and distorted vocals serves to enhance the bleak atmosphere being fostered, whilst the guitar lines weave together a series of blistering tremolo lines into an array of dark harmonies. Moments of monolithic and epic slowness leading into hellish blazes of fury, whilst nothing totally new for the band, are here delivered in such a way as to make the song one of the best the band have ever written.

“Rise To Fall And Fall To Rise” shares some strange similarities with the work of Emperor on “Prometheus” and actually shows the band stepping further outside their comfort zone and stretching their melodic sensibilities in an attempt to capture a greater sense of depth and mood; the verse riff and melody would make any fan of Hypocrisy happy (the album was in fact overseen by Hypocrisy mainman Peter Tagtren at his Abyss Studio), whilst some of the chord phrasings and keyboards in the chorus definitely put me in mind of Emperor’s final work. That’s not to say there isn’t some traditionally Belphegor extremity present, as drummer Marthyn Jovanovic’s performance remains pleasantly blistering throughout.

Following-up with the title track, the band slip back into higher gear speed-wise and also take the opportunity to demonstrate their shredding skills with some periodic fleet-fingered fret-work. The main surprise in this song is the eerie lead and clean-picked pre-chorus, which leads into a standard (yet still incredibly welcome) Belphegor chorus refrain, growling “Blood Magick Necromance” over a fast tremolo melody and pummelling drums. A great song representing both the old and the new. 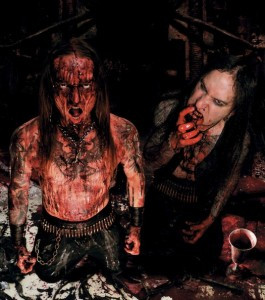 “Discipline Through Punishment” continues the trend for this album to focus on dark melody and echoing guitar leads, opening with a bleak melody picked out on a lone guitar, before lurching into a slow, mournful crawl for the verse. The bass-led melodies really help to bring the track out of itself, whilst the steady increase in speed leading up to the chorus adds a nice sense of dynamic to the proceedings. The drums are particularly restrained throughout this track, whilst the guitars only really blaze into life for the solo section near the conclusion. Overall the track is a welcome change of pace and adds a different dynamic to the flow of the album as a whole.

“Angeli Mortiis De Profundis” is the most stereotypically-Belphegor track on offer here, whilst also recalling the most aggressive aspects of Dark Funeral. A furious blast-fest for the majority of its 3:00 run-time, it also features a prominent screeching solo and far less melody than most of its brethren. Despite its relative simplicity, however, it remains an energetic palette cleanser of a track, direct and forceful in intent.

“Impaled Upon The Tongue Of Sathan” is perhaps the most death-metal oriented offering here, a sharp, staccato riff introducing the track before the grime-coated verse grinds into view, with only a series of lead and solo lines able to lift the mood out of the grime at key points. The song structure is nicely varied in terms of shape and speed, mutlitple interlocking guitars and overlaid melodies all carefully constructed for maximum effect. The track is one of the most punchy on offer and ducks and weaves in a slightly unpredictable manner, culminating in a surprisingly melodic outro, all tolling bells and cleanly picked guitar.

“Sado Messiah” (clearly not a title coined to avoid controversy) begins with a forceful blast-and-trem combo, before introducing a stunner of a riff at around the 00:31 mark, which drops in and out of the song to provide a strong and catchy refrain. Placing an emphasis almost purely on speed this time around, the band race through a series of tremolo riffs and blast-heavy drumming with little regard for the listener’s aural well-being, occasionally flirting with a slower pace purely to mix up the momentum. The song ends abruptly with a drawn out, bilious snarl from Helmuth and that’s it… you’re done. Another Belphegor album in the can, although arguably a stronger album than either of the last two (neither of which was by any means bad either). 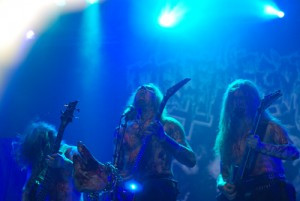 Whilst not a re-invention or a stunning left turn from the band, Blood Magick Necromance could very well stand as one of the strongest releases in their extremely consistent and consistently extreme discography, marking the moment where they truly mastered their own sound and approach following their most recent stylistic shifts. Each song has a unique life of its own this time around, standing out from the pack whilst also providing a key brick upon which to build the foundations of an extremely strong album. Just when you thought you knew what to expect from the band, they’ve found another gear and some well-implemented new tricks.

[EDITOR’S NOTE: Here’s a song from the album for you to check out:

Belphegor: In Blood-Devour This Sanctity

Also, just a few days ago Belphegor released a video for “Impaled Upon the Tongue of Sathan”, which is available at the Bloody Disgusting site (here). If you have any problems with blood-drenched nudity and scenes of gore-soaked, freshly harvested human organs, you might want to pass. Otherwise, go for it!  Definitely NSFW.]