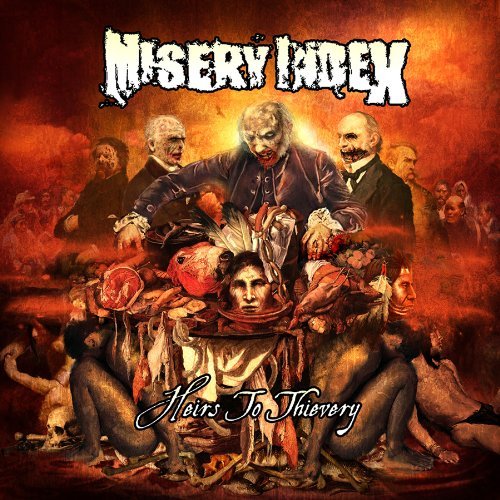 We’re down to the next-to-last installment in our list of last year’s most infectious metal songs. (Read this for our definition of “most infectious” and click the Category link called MOST INFECTIOUS SONGS-2010 to see the other listed songs to date). Two more songs today and two more tomorrow, and we’re done.

Heirs To Thievery is another one of 2010’s best albums that we never got around to reviewing, though it appeared on several of our guest contributors’ lists of last year’s noteworthy releases. Johan Huldtgren gave it the No. 6 spot on his list and wrote: “More polished (good), less grindy (bad) than before this, it is still an amazing album.” Andy Synn included it on his list of the year’s “good” albums, explaining: “[A]t times [it] comes across as a good, but slightly less balanced, cousin to the career defining Traitors. Heirs To Thievery is not as strongly tied together as Traitors and lacks some of the gusto that was such a shock to many ears, perhaps exactly because we’d all been effectively spoiled by the superior goods offered up by Traitors.”

Although we agreed with Johan that the album is less grindy and more thrashy death than some of the band’s earlier works, it’s still a mauling dose of aggression with blazing, intricate riffage and over-the-top drum-pummeling. At the same time, despite the turbo-charged rage that screams through every song, the music triggers the need to move (as well as the desire to punch the shit out of something). The best song on the album — “You Lose” — is also one of the most infectious extreme metal songs we heard last year.  (more after the jump, including the music . . .)

This song gets its venomous teeth into you right from the start and then starts shaking you mercilessly. It’s ingeniously constructed and executed with unbridled energy. Go ahead — bang yo head: 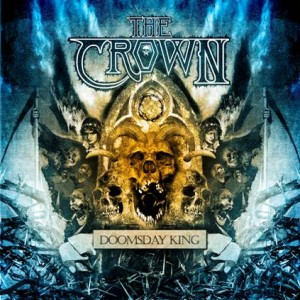 The Crown’s 2010 album, Doomsday King, was another that made our lists of year-end bests. Andy put it at No. 8 on his personal Top 10, calling it “the best comeback album of the year.” “The vocals are easily a match for anything that has gone before, the riffs are never less than killer, the slow parts groove and smoulder, the fast parts explode and shred, the melodies are darker, the sound is better. It’s just superfluously good.” The Artist Formerly Known As Dan put it at the No. 2 position on his list. In his words, The Crown “are everything that is right with metal today.”

As Andy wrote in his full review, “Doomsday King is a masterpiece of wild fury and calculated aggression. . . . Overall this album is everything you could have hoped – the riffs are hard and evil, the guitar leads shred and rip, the vocals are heavy, Satanic and memorable, and the drums rarely break from an all-out punishing assault.”

One of the songs on Doomsday King stands out as a classic example of how to enliven death metal with a killer hook. And it’s got lyrics you can hear that invite a chant-along: “I will carry your bones / I will carry you alone . . . Blood, blood, blood / O.D.!”

9 Responses to “OUR LIST OF 2010’S MOST INFECTIOUS EXTREME METAL SONGS: PART 14”