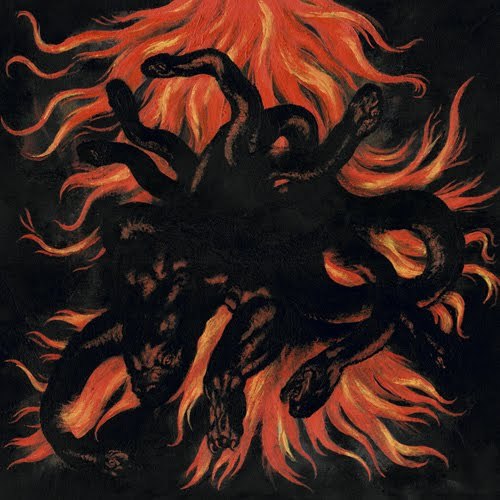 [EDITOR’S NOTE: Not long ago, we ran a mini-series about Long Songs that we really liked. The longest, and last, in the series was a powerful, album-length opus by a Swedish black-metal duo called Obitus (our review of the album is here). Through that review, we made the acquaintance of Johan Huldtgren, the vocalist and lyricist of Obitus, and his comments on this site have turned us on to some stunning music.

Eventually, we figured out that Johan was the brother of Fredrik Huldtgren, the vocalist for Canopy — another metal band whose work we had praised earlier in the year. We asked the brothers Huldtgren if they would contribute to our Listmania Week, and they did. In this post, Johan gives us his Top 10 list (it’s more mind-expanding than most lists you will read this year), and a selection of one song from each album. In the post below this one, we’ve got Fredrik’s list.]

Noisy, nasty, primitive, minimalistic, and all around disgusting.

Show, repetitive and churning, the droning easily sweeps you away.

8. Ondskapt – Arisen From The Ashes

Solid album, but nothing new under the sun.

To everybody’s surprise some ex-cons can make really good music.

More polished (good), less grindy (bad) than before this, it is still an amazing album.

Not the Drudkh of old, but solidly down the road they’ve been walking for a while now. Wish they’d kept a dirtier guitar sound though.

4. Sargeist – Let The Devil In

Execution makes this one hell of an album as the songs are very standard fare. Top notch delivery on vocals and guitars really makes all the difference.

Watain follow up the excellent “Sworn to the Dark” with the equally amazing “Lawless Darkness” — cleaner and slower than it’s predecessor, but no less gripping and infectious. This has easily been my most played album of 2010.

Concluding their theological trilogy, they pick a middle ground between “Si Monumentum Requires, Circumspice” and “Fas – Ite, Maledicti, In Ignem Aeternum”. That said, this is still no easy listening and will win them no new fans. Those of us who have been here for the whole ride, though, will just keep hitting “play”.