Last year, Prosthetic Records made its first signing of a UK band — a mysterious foursome called Dragged Into Sunlight — and last week the label reissued the band’s debut album, Hatred For Mankind, which was originally released in more limited distribution more than a year ago by Mordgrimm Records (Anaal Nathrakh, Covenant).

The album, was produced by Tom Dring and Billy Anderson — who has also produced groundbreaking albums by Eyehategod, Neurosis, Melvins, Weedeater and many more — and it features the striking cover art of Justin Bartlett (shown above, with the CD booklet unfolded to show the front and back as a single piece).

Now, you wouldn’t be visiting this site if you didn’t have a taste for extremity in your metal, but even so, we may be pushing the envelope for many of you by promoting this music. Listening to it is a harrowing but remarkable experience. It’s a cataclysmic, corrosive, chaotic, cathartic, crushing cavalcade of cacophony. It’s one of the most disturbingly brilliant albums we’ve ever heard.

And there’s a weird footnote to this story, which involves YouTube banning the band’s one official video yesterday, not because it’s extremely disturbing (which it is) but because — blasphemy of blasphemies — it shows a penis. (more after the jump, including a song that will gut you like a fish . . .) 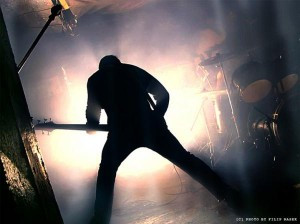 The seven tracks on the album range in length from 2:47 to 11:36, with a collective running time of over 50 minutes. Getting from the beginning to the end unscathed is an impossibility, and yet Hatred For Mankind is an album that seems designed to be heard in one sitting. The songs move from one to the next almost seamlessly, and the cumulative effect is decimating.

Billy Anderson’s involvement in the production provides a clue to the music. It does indeed share DNA with bands like Eyehategod and Neurosis. It also reminded us of Streetcleaner-era Godflesh, but Dragged Into Sunlight have served up their dish of sludge and doom with less of an industrial flavor and instead have heavily spiced it with the rushing acidity of black metal.

Vocal samples appear in almost every song (including a passage on the opening track from John Moran’s opera, The Manson Family, which we last heard on Pristina‘s 2010 album The Drought (Ov Salt and Sorrow)), but the vocals actually recorded for the album are terse and vicious and submerged in the mix. A combination of disturbing shrieks, near-pig-squeal explosions, blood-coughing hacks, and razor-edged whispers, the vocals enhance the scorching atmosphere of the music, but in the main, this is an instrumental album. 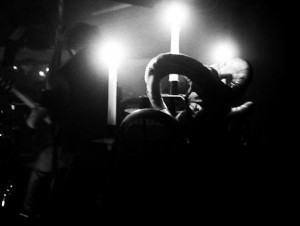 Walls of guitar noise whine and churn, they claw and tear, they grind like gears about to lock up for lack of lubricant, and they hit you in waves. Squalling solos erupt without warning and spit fire like a circus geek with a belly full of kerosene. But although the music at times veers into avant-garde, experimental territory (particularly on the closing track, “Totem of Skulls”), there are plenty of headbanging riffs and rhythms to keep your attention hooked.

And speaking of rhythms, the brilliant drumming on this album is absolutely key to its success. Heavy use of the toms and bass drums enhance the bleak, booming, destructive tone of the music, and changes in the drumming techniques and rhythms both keep you off-balance and pull you deep into the blackness: There are moments in every song when the double-bass kicks in at an insane pace, pushed forward in the mix, and it creates a dull, whumping sound like the rotors of a rapidly approaching attack helicopter about to rain death from the sky. 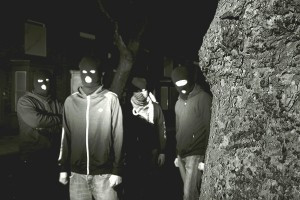 Whether droning and discordant or voracious and seething, the songs are inventively designed to create an atmosphere of soul-rending despair and to generate the kind of adrenaline surge brought on by the threat of imminent destruction. Listening is like being caught in the roaring squall of a hurricane, realizing too late that you can’t ride it out like you stupidly thought you could: It’s the end of your world, in a maelstrom of overwhelming sound.

Sampling this album cannot do it justice, because it’s like a torn edge from a blueprint. You cannot imagine the whole edifice by seeing a single parapet or pillar. But with that apology, here’s a track. You’ll know whether this is your thing pretty fast. It may leave you with your eyes rolled back in your head and flecks of foam at the corners of your mouth, and it may leave you smiling, too:

For U.S. listeners, Hatred for Mankind can be acquired from iTunes and Amazon MP3, and physical CDs are available from Amazon, Prosthetic Records, and The Omega Order. And Brooklyn Vegan is still offering a free download of the opening track, “Boiled Angel”, here. 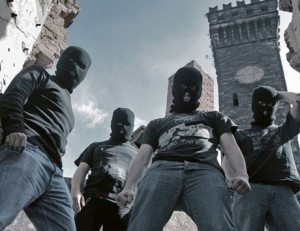 Perhaps in keeping with the über-bleak, nihilistic aura of the music, Dragged Into Sunlight have taken steps to build an ominous mystique about themselves. In photos, they appear masked like terrorists, and they do not publicly disclose their names. They don’t seem to wear masks when performing live, but they do play in near total darkness, shrouded in smoke, and much of the time with their backs to the audience. You’ll get a taste of that from the live videos below.

Before showing you the live videos, we had planned to embed the band’s “official” video for the song “Buried With Leeches”. Including this video in the post wasn’t an easy decision. On the one hand, it complements the music, perhaps even completes it. On the other hand, the imagery is horrific, gruesome, and utterly hopeless. But we decided you’re all grown-ups, right? And grown-ups get to name their own poison.

Except that YouTube knows better. Yesterday, YouTube — which had hosted the video when we first saw it — decided to ban it for violating the company’s policy on “nudity or sexual content” — which is the height of absurdity. Yes, there are momentary images of a penis in this video, but there is nothing erotic or pornographic about it. Instead, the images display the humiliating horror of a man being degraded and tortured in agony, stripped of his dignity as well as his clothing. That might have provided a reason to prevent the 12-year olds who frequent YouTube from seeing the thing, but that’s not why YouTube deep-sixed the film.

Information will be free, and all that happy horseshit, which means the video will undoubtedly surface again. And if we find that it’s being hosted by a new source which doesn’t give a shit about the exposure of penises in a disturbing work of cinematic art, we’ll stick it in this post. In the meantime, we’ve just got these videos of fully clothed people playing disturbing works of music — with their backs turned, and probably with their pants zipped.

8 Responses to “DRAGGED INTO SUNLIGHT”