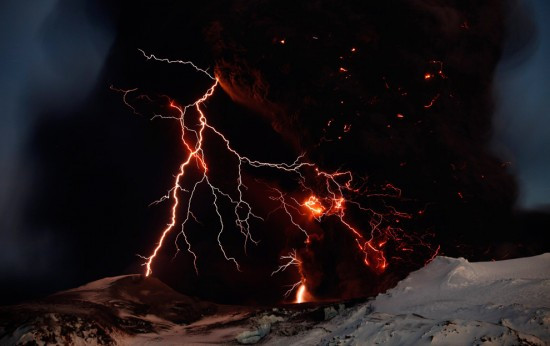 It’s been almost three weeks since our last “THAT’S METAL!” post. We don’t put up installments in this series on any kind of regular schedule, but that’s still way too fucking long. As regular readers know, for these posts we look for news reports or photos or videos that make us think, “shit, that’s metal!” — even though it’s not music.

For this installment, we’ve got a few news items that relate to intoxicants — or in one case, to what some Darwin Award candidates thought were intoxicants — plus the best beer commercial we’ve ever seen.

And then, for the fuck of it, we’re interspersing among those items some random photographs that are all kinds of awesome which we found at Boston.com. They’re from an amazing collection of 120 news photos from 2010 — a “best of the year” round-up that’s worth checking out in full if you’ve got the time (here).

The one at the top of this post is a shot of lightning streaks across the sky as lava flows from an Icelandic volcano in Eyjafjallajokul on April 17, 2010. You might remember that this volcano spewed ash into the air for weeks, wreaking havoc on flights across Europe and fucking up plans by various metal bands for European tours.

For the rest of our items, plus our usual tasteless commentary, continue reading past the jump . . .

It’s amazing what some people will do to get high. Would you believe snorting bath salts? It’s true (and apparently pretty fucking dangerous). About the only thing I snort these days is mucus (my own, to be clear), but some cretins apparently will put just about anything up their noses if there’s a chance for a buzz. In the Annals of Snort, however, this next story is waaay up there.

MIAMI (Reuters) – Burglars snorted the cremated remains of a man and two dogs in the mistaken belief that they had stolen illegal drugs, Florida sheriff’s deputies said on Wednesday.

That’s pretty fucking metal, in a retarded kind of way, don’t you think? I’m not sure which is the most moronic part of this story — huffing cremated remains or confessing to the cops that you did it because you thought you’d stolen illegal drugs. If they’d kept quiet after the arrest, a good lawyer could have made up a story that it was part of a religious ritual. Y’know, a direct route to the spirits of the ancestors? Well, anyway, there’s more . . .

The ashes were taken from a woman’s home in the central Florida town of Silver Springs Shores on December 15. The thieves took an urn containing the ashes of her father and another container with the ashes of her two Great Danes, along with electronic equipment and jewelry, the Marion County Sheriff’s Office said.

“The suspects mistook the ashes for either cocaine or heroin. It was soon discovered that the suspects snorted some of the ashes believing they were snorting cocaine,” the sheriff’s report said.

Think about that for a minute. The remains were in two different urns. Which means these dudes didn’t stop after snorting the dead man’s ashes and realizing they’d inhaled something that did nothing for them — they proceeded to the next urn and snorted the dogs, too (or vice-versa).

The suspects were jailed on numerous burglary and other charges.

The prosecutors probably had to get creative on those other charges. Illegal possession of dog blow? And man, what a bummer for the woman, realizing that the last remnants of her daddy went up the nostrils of some felons. There’s a lesson here: When people die, they’re just fucking dead, and keeping the atoms of their bodies around the house is just asking for trouble. 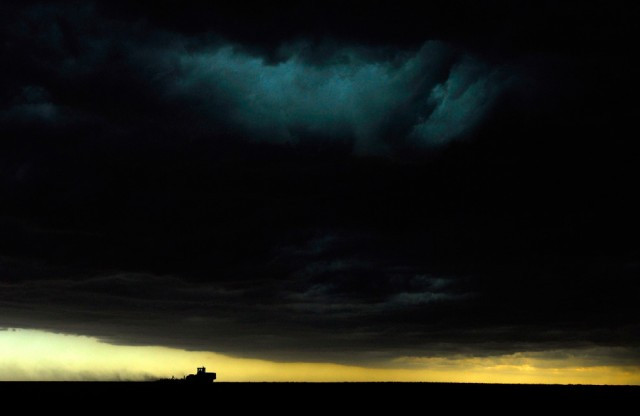 This is another photo from that Boston.com collection. It’s a pic of a farmer working in a field southwest of WaKeeney, Kansas on Sunday, June 20, 2010, with some pretty brutal clouds looming overhead. Severe weather battered parts of northwest Kansas that day with heavy rain, wind, hail and tornadoes. Maybe this dude thought that if he ran into a twister, he’d simply wake up in Oz.

Back to intoxicants. This time, the story isn’t about bath salts or dog remains but weed — and the increasingly inventive ways that Mexican drug cartels are using to get it across the border into The Land of Plenty. 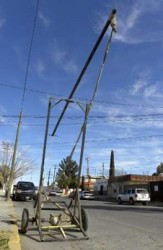 Two massive drug catapults were found in the Mexican state of Sonora, about 20 yards from the U.S. border in Arizona, the Associated Press tells us.

Resting on SUV flatbeds, each of the ancient contraptions were capable of flinging 4.4 pounds of marijuana over the border at a time.

Catapults are an ancient invention. According to The Font of All Human Knowledge, they date back to at least the 9th century B.C. But this story proves that if you put your mind to it, you can always come up with new ways of using old technology. Shit, I sure wish we had some video of this smuggling operation in action.

And by the way, when are our fearless leaders in government ever going to wake up and realize that this never-ending “war on drugs” thing is a fucking joke? Now, drug enforcement agents are using satellites and helicopters and unmanned drones against, uh, catapults — and they’re still losing. 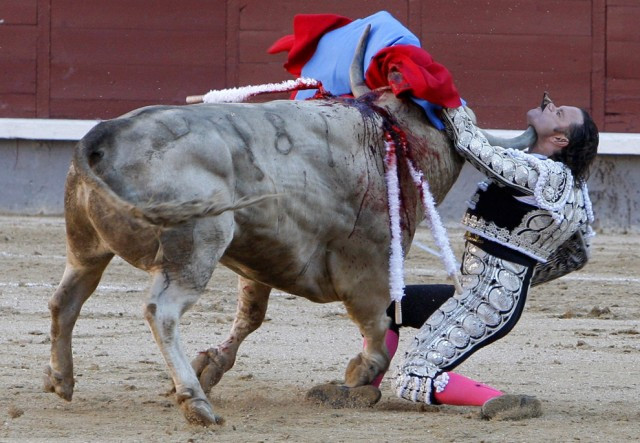 We’ve included bull-fighting stories, pictures, and videos in previous editions of THAT’s METAL! Almost always, they’ve involved the worm turning, i.e., the bull getting in a few punches before his inevitable end. That always seems metal to me.

In the gruesome photo above, from that Boston.com collection, a bull gores Spanish matador Julio Aparicio through his throat during a bullfight in Madrid last May. Aparicio underwent surgery and survived. The bull did not.

Of course, beer is metal. Sometimes beer commercials are metal, too. Like this commercial for the Japanese beer Sapporo. It’s the best beer commercial I’ve ever seen. It’s amazingly detailed, and watching it in full-screen mode is the best way to see everything that’s going on. As commercials go, it’s definitely fucking metal.

I’m gonna wrap this up with a few more photos from that Boston.com collection. Happy trails. 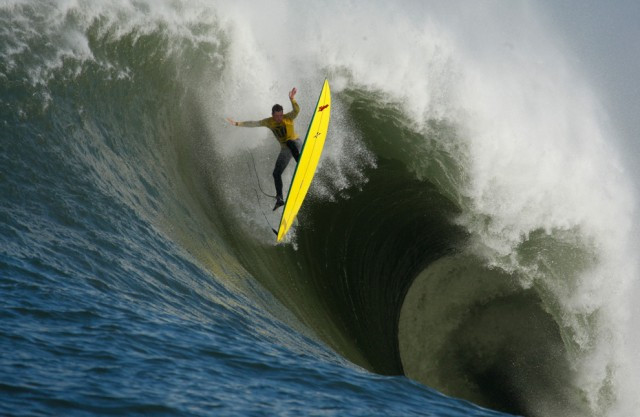 In this Feb. 13, 2010 photo, Ion Banner loses control on a giant wave during the first heat of the Mavericks surfing contest in Half Moon Bay, California. Looks like he’s about to get ionized. 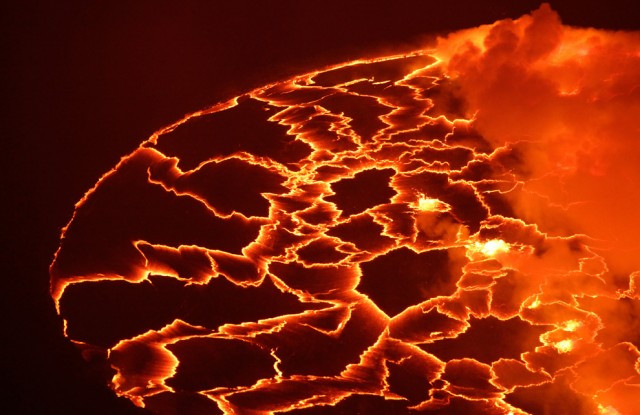 This shot shows magma churning and gushing in the lava lake of Mount Nyiragongo, one of Africa’s most active volcanoes, in Goma, Congo on March 31, 2010. There are images of nature that would make great album covers for metal, and this is a fine example. 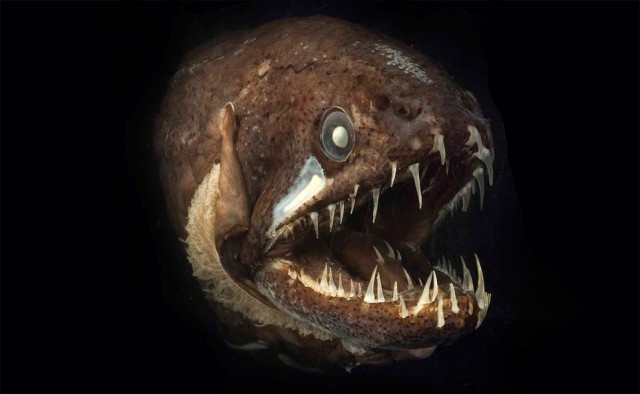 This is another good example. This is a dragonfish. It is fucking metal. Not only does it have teeth on both jaws, it also has teeth on its fucking tongue. You will be relieved to know that although this thing is scary as shit to look at, it’s only about the size of a banana. Which of course suggests a new twist on an old line: Is that a dragonfish in your pants, or are you just happy to see me?