I’m way behind with these MISCELLANY posts. Of course, “Way Behind” is one of my middle names (or two of them), so I guess this doesn’t come as a shock to anyone. It’s still unfortunate, because the longer I wait to do one of these, the more impossible it becomes to get through all the undiscovered music I’d like to hear. Actually, there’s no such thing as “more impossible”. A task is either possible or it’s not.

Anyway, there are rules to performing this particular impossible task: Here at NCS we keep a running list of bands whose music we’ve never heard, but who look interesting for one reason or another; usually, they’re bands who are fairly new to the scene. When time permits, I pick a handful of names off the list and listen to a song or two from each band and then write about my reactions in these MISCELLANY posts. Sometimes, I’ve got reason to think I’ll like the music, but usually I have no idea. And because I’m realistic about the worth of my own opinions, I give you a chance to hear what I heard so you can make up your own minds.

In this installment of the series, I checked out the following bands from the following places: Red Descending (Australia), Death Comes Pale (Denmark), and PLAAG (Belgium).  (more after the jump . . .)

Red Descending is an Australian band who took their name from a line in the Dark Tranquillity song “Wonder At Your Feet” (and you could do a lot worse in name dervitation). They released their debut album in 2008, entitled Where Dreams Come To Die. Recently, our blog comrade Niek from The Netherlands e-mailed me with a recommendation that I listen to a song from that album called “Shadows Fall”. Given the source, I had more reason than usual to think I’d like the music — and I did.

“Shadows Fall” begins with an acoustic guitar instrumental, and just when I was starting to get into that, the sonic floodgates opened and a rush of galloping melodic death riffs poured out. Keyboards joined the fray, giving the song a symphonic air. The vocals mix cutting death-metal growls and mid-range clean song, with some vocal samples thrown in, and even a layering of guest female voices near the end. It’s a well-played, catchy barrage of thunder that reminded me of Amorphis-style Finnish melodeath. Here’s what I heard:

It turns out the style of music reflected in “Slaughter Falls” isn’t entirely representative of Red Descending’s sound. I found this video of another song from the debut album (“Century”), and to my ears it’s much more a work of symphonic black metal, in the vein of Dimmu Borgir and Emperor — but also quite excellent. Check it out:

Where Dreams Come To Die is available on iTunes, and you can read Niek’s interview of Bernard Shaw, the band’s vocalist and bass player, at this location. You can find more info about the band here. 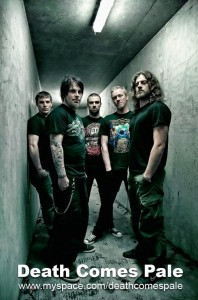 Last year, I had good luck in my forays into Danish metal, finding lots of music to like from The Burning and Psy:code, among others. So when we were contacted by yet another band from Denmark, Death Comes Pale, I jumped at the chance to see what they were all about.

The core members of this band have been playing together since 2003 (then in a group called Carnal Harvest) and finally released a debut EP called Through Carrion Eyes in December 2010. It includes four songs written over the last five years, and the band reports that it’s working on new material for a follow-on release planned for the summer or fall of this year.

For this MISCELLANY expedition, I listened to a song from the EP called “Primal Supremacy”. And oh shit, did it hit me square in the head like a length of stout lumber. There’s a bit of intro like the sounds of ominous rain clouds thundering their menace, and then it’s a beautiful cascade of rolling death-metal pulses, stretching you on the rack and radically lifting you up like a marionette on strings of gossamer tension. The song jolts and bolts, and then streams on beautiful arcs of melodic rifffage, with expertly constructed pummeling, melded with sulfur and fire and the blaze of an aurora borealis in a very dark sky.

Okay, maybe I got carried away there. And maybe not. I listened to the fucking song again, and the next one (“Serpent of Eden”), and I’m convinced: This is an injection of what you need when what you need is a blaze of cutting knives and the sweep of memorable melody to flow with your blood as it hits the floor. Here’s “Primal Supremacy”:

Here’s the band’s ReverbNation widget, which includes the song I heard plus the other three on the EP and an older song called “Apocalyptic Perfection”:

Through Carrion Eyes is available on the Danish and Swedish versions of iTunes, and NorthAm denizens can buy a digital download from this location. For more info about the band, visit their official site here; it contains links to their MySpace and Facebook pages. 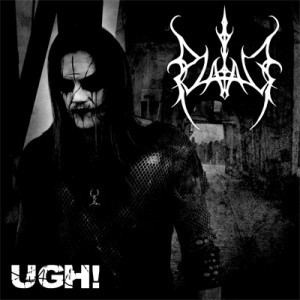 PLAAG is a one-man show from Belgium — or at least PLAAG’s recently released debut album, UGH!, is the product of a single individual who goes by the name Somber. For purposes of live performance, Somber has recruited additional members. In addition to providing the vocals and playing all instruments on UGH!, Somber also recorded and engineered the album, while mastering was executed by Daniel Vrangsinn, the bassist for Carpathian Forest and the founder of one of our favorite un-labels, Misantrof ANTIRecords (about which, more later).

I discovered PLAAG via an e-mailed press release from the always reliable Patricia Thomas. What particularly caught my eye (apart from the great album title) was Somber’s description of UGH! as “a piece of pure, get down and have a good time Black ‘n Roll”. I like to get down and have a good time, and I do like me some black ‘n roll when I can find it. So, plucking PLAAG from the MISCELLANY list for today’s post was an easy call.

Turned out to be a good call, too. I listened first to UGH!‘s opening track, “Somber’s Out”. It launches with raw, razor-edged riffing, and following a short bridge, it bolts into a balls-to-the-wall romp of head-banging nastiness. Punk rhythms tag-team with bursts of double-bass and scorching ax-work as Somber spews forth Nordic-style acid in his vocals. It’s a cool mix of high-octane viciousness and driving rhythms that made me want to slam into something, or anything.

I liked that first track so much that I decided to indulge myself with a second song, and I jumped ahead to one called “Silently Beaten To Death” — because the title just rolls pleasantly off the tongue, don’t you agree? It’s more mid-paced than “Somber’s Out”, but again, it’s charged with an infectious punk beat and features a catchy-as-hell melodic guitar lead. Who says black metal always has to be grim? Here’s the first track I heard:

UGH! is available for free download at Misantrof ANTIRecords (here). Misantrof is home to bands like Episode 13, Nierty, and Profane Prayer, as well as releasing archive material from some of the cult bands and musicians from the Norwegian black metal scene.  The label is a 100% non-profit organization that allows all its artists to maintain complete control of their material and their earnings. Happy fourth birthday Misantrof! And high horns to what you’ve done for PLAAG — because we’re the richer for it.

That’s all I’ve got for this edition of MISCELLANY. In an effort to catch up, I’m going to try to do another one of these posts before the week is out. Enjoy the rest of your fucking day.