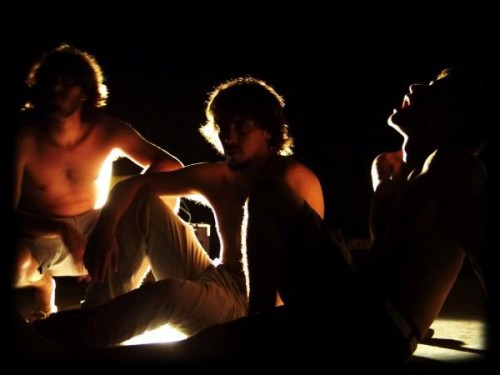 Have you ever listened to metal you really liked that you tried to describe to someone else — even another metalhead — and your brain and tongue locked up because you couldn’t find the right words, or even other bands that you could use as references? That’s the affliction that’s been inflicted on me by an unsigned band from San Miguel de Tucuman, Argentina, called Random.

I will warn you: The music isn’t quite our usual fare here at NCS. For example, this band includes among their cited influences Tool, The Mars Volta, Deftones, and King Crimson — and there’s a lot of clean singing. On the other hand, they also cite Meshuggah, Mastodon, The Dillinger Escape Plan, and Between The Buried and Me. What’s really freaky is that the music they make is in line with all those influences, and it’s so well executed that dropping names like those isn’t overreaching.

I shit you not — this is brash, brilliantly inventive, creatively constructed music, densely packed with stylistic extravagance and technical wizardry, and it deserves a big audience. Getting there will just take a little word-of-mouth, and some receptive ears. We’ll supply some words — you supply your ears.  (more after the jump . . .) 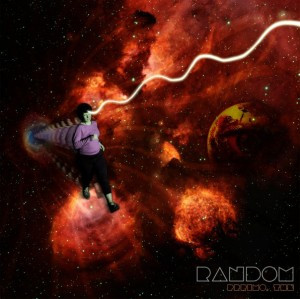 Random’s EP includes only three songs, but one is nearly 8 minutes in length and another exceeds 10 minutes. Even with the longer-than-average run-times, the music doesn’t wear out its welcome. This band is bursting with ideas and an obvious yearning to show listeners what they can do, both in conception and in performance. Some of you may decide the band reaches for too much, but in my very humble opinion, it all holds together; Random’s considerable reach does not exceed their grasp.

The first track, “The Most Pleasant Nightmare”, begins innocently enough with barely audible percussion, but it grows increasingly fast and intricate, building up to the eruption of a jolting blast of riffage and hammering drums. The time signature and the tempo begin to jump all over the place, and eventually the blasting falls away, leaving in its place a prominent bass arpeggio and then a slowly ringing guitar lead, sans drums.

But the drums eventually return with a vengeance, heralding the launch of a new round of technical riffing — a combination of Meshuggah-esque hammering and proggy runs. And then, as the rhythms settle into a crushing, shuddering repetition, a white-hot guitar solo leaps forth — and then falls away into a crawling trudge right before the final wash of rushing riffs. 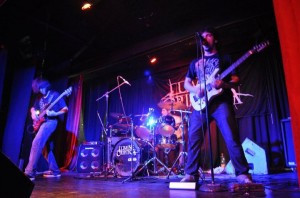 The second song, “Walk the Twisted Line”, charges out of the blocks with more machine-gun chords and blazing kitwork, but the rhythms continue to shift, and the sound flows from relative explosiveness to relative quiet, and back again. This song features more riveting vocal performances, another guitar solo that will set your hair on fire, fancy finger-work on the bass, and an eye-popping display of drum fills and progressions.

And then comes the longest song, “Expressive Logic”. It starts with a sample from the ravings of Peter Finch from his portrayal an increasingly deranged TV news anchorman in the 1976 film Network, and that flows into a deceptive little piece of jazzy bass-and-guitar riffing, which gradually builds in intensity as Raul begins to milk a wide variety of tones from his guitar and Marcos puts on another remarkable show on the drums in a lengthy instrumental intro.

Lots of rhythmic hammering follows when the vocals kick in, with a variety of whining, droning, echoing guitar leads and solos, as Raul milks an increasingly wide array of tones from his ax. The whole insane enterprise grinds briefly to a dead stop, only to erupt again into a sludgy guitar assault and yet another jaw-dropping drum attack — followed by an infectious rock ‘n roll riff and then a prog-metal melody that nearly finishes the song. 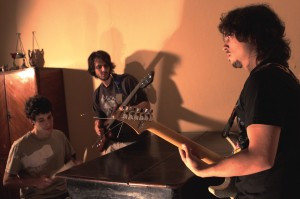 “Expressive Logic” features more of Raul’s vocal power and range, and two moments really stood out as examples of creative song construction: one when he hits a falsetto note that’s followed immediately by a detonation of instrumental explosiveness, and a second when the sample from Network returns — just as Finch yells the word “mad!“, Raul begins a guttural roar. You’ll hear what I mean in a minute. Just listen (this song is 10 minutes long, but trust me, it will fly by):

Random has made the EP available for free download at their official site (here), and for more info about Random, visit them on MySpace and Facebook.

The band tells us that they are now recording their first full-length album, a conceptual work they will call Todo.s los colores del, with all new songs. Should be very interesting to hear what these dudes cook up next.