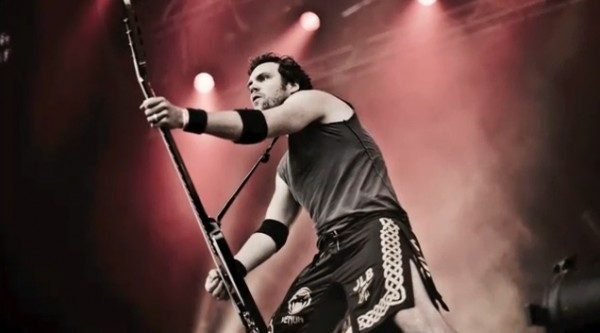 All death metal, all the time — at least for today. We started with Deicide, and now we’ve just seen two new death-metal videos from the other side of the Atlantic. We can take the hint: The metal gods have commanded that we give equal time to the Swedish school of cranial carving.

Our first offering is from The Crown — a band whose 2010 Century Media release, Doomsday King, made a big impression on us and found a place on lots of the Best of 2010 lists we published at this site. The new video is for a song called “Falling ‘Neath the Heaven’s Sea”, which appeared on a 4-song bonus CD that came with the digipack version of Doomsday King. It’s a surprise compared to the songs on the album proper — but a nice one — and the video is an engaging montage of tour photos.

Our second offering is from another Swedish band called Puteraeon, whose debut album The Esoteric Order was released in Europe not long ago on German label Cyclone Empire. We have Johan Huldtgren (Obitus) to thank for turning us on to this band in one of his comments to an earlier post. We’re still waiting for our copy of the CD to arrive, but this new official video for the song “Coma” is proof that the wait will be worth it.  (We were saving this video for a special edition of MISCELLANY tomorrow, but we’ll find something else juicy from Puteraeon for that post.)

Both these bands carry the banner of Swedish death metal proudly, and the songs featured in these videos are excellent. Watch ’em after the jump.

8 Responses to “GAS UP THE CHAINSAWS! (NEW VIDZ FROM THE CROWN AND PUTERAEON)”