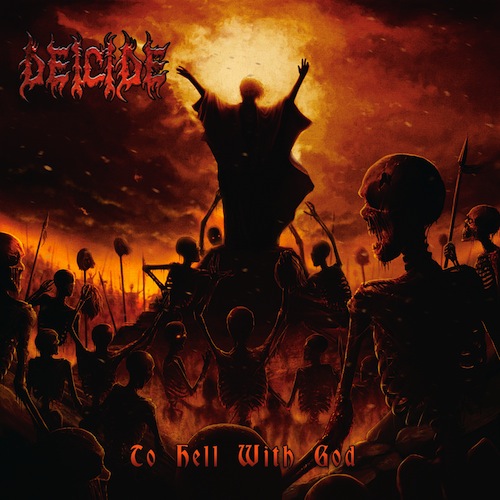 On February 15, the infernal majesty of DEICIDE will unleash hellfire on our fragile world with Century Media’s release of the tenth album in their storied career, To Hell With God. Today, we are proud (and duly humbled) to provide the exclusive premiere of the closing track from the new album, called “How Can You Call Yourself A God?”

As we wrote yesterday, this is a red-letter day for us. Not only is this our first world premiere of a song, it’s a song by one of death metal’s true icons — a band whose name every devoted deathmetalhead knows, a band who helped brick and mortar the foundations of a genre on which so many other bands have built their own work.

Deicide put the “fuck” in “I don’t give a fuck”. They put the “bad” in “bad-ass”. They may have put the “ass” in “bad-ass”, too. They represent all that is unclean about NO CLEAN SINGING. In a nutshell, for us, getting to premiere a Deicide song is like a fever-fueled, ringing-wet, nightmarishly horrific dream come true.

In debuting a track from the new album, we’re joining MetalSucks, who premiered “Hang In Agony Until You’re Dead”, and Invisible Oranges, who premiered “Into the Darkness You Go”, in helping to introduce the new album to all of you. We have a few words about the song itself — plus the fucking song — right after the jump.

Playing a seminal role in the development of a whole genre of music doesn’t mean, 30 years later, that you’re capable of creating new music that’s worth the time of day. But on the strength of the three songs that have become public so far, Deicide has still got the smoking sulfur in the belly — and all the songwriting and performance chops needed to kick the living shit out of most of their contemporary competitors. In fact, based on what we’ve heard, To Hell With God is Deicide’s best work since The Stench of Redemption in 2006.

The song we’re premiering today, in particular, shoves the furnace door open and engulfs you in a heatwave of sonic power. It definitely has the hallmarks of Deicide’s classic, Florida death-metal sound — that high-speed mix of scorched-earth brutality, intricate riffing, and roaring menace. But from the attention-grabbing intro to the final feedback-fed seconds, it also features an abundance of smoking hot guitar leads and solos — the best we’ve heard yet from the three songs that have debuted to date from To Hell With God. Combining that righteous ax-work with the catchy-as-hell rhythms and melody, this song has the makings of an instant Deicide classic.

In fact, if Glen Benton’s infernal voicing of the chorus doesn’t become a sing-along favorite at Deicide’s future concerts, we’ll spontaneously combust into a big platter of human barbeque.

So, with all that build-up, here’s the song:

There’s still time to pre-order To Hell With God at this location, and you can see the band in person when they headline the GOD IS DEAD – TO HELL WITH GOD TOUR beginning next week, with support from Belphegor, Blackguard, Neuraxis, and Pathology.  Sheeeit, that’s a mighty fine line-up. And we’ve only got to wait one short month to hear Deicide deliver the decimation in Seattle. 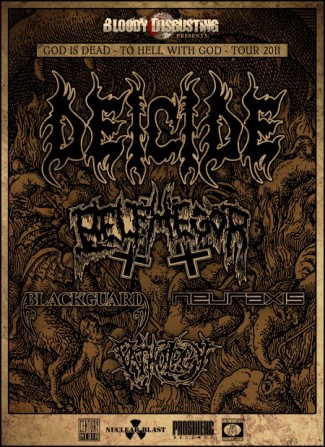 UPDATE:  We’e just seen the announcement that Deicide will be touring Europe in June and July with yet another roster of excellent supporting bands — Belphegor, Hour of Penance, and Amenta.  Here’s the schedule: 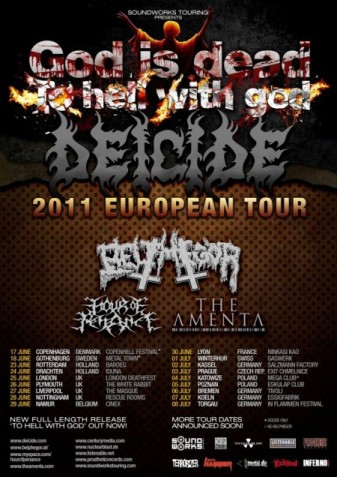 19 Responses to “AN EXCLUSIVE NCS PREMIERE: DEICIDE’S “HOW CAN YOU CALL YOURSELF A GOD?””