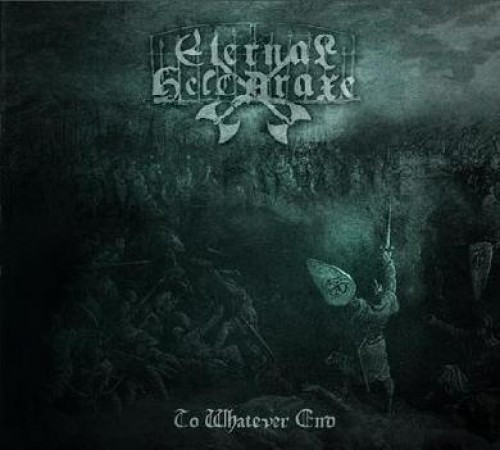 J.R.R. Tolkien had a talent for creating evocative names for beings and places in his writings about Middle Earth, and many of those have exerted a magnetic attraction on metal bands. To name a few: Amon Amarth (the Elvish name for Mount Doom), Gorgoroth, Nazgul, Ephel Duath, and Burzum (one of the words written in Black Speech on the One Ring of Sauron).

Helcaraxe is a lesser known place-name, probably due to its appearance in one of Tolkien’s less-frequently read (and posthumously published) works about Middle Earth, The Silmarillion. It doesn’t sound like a hospitable place. Tolkien describes it as a wasteland of bitter cold and grinding ice (we’ll have his full description at the end of this post). And yet it’s the name chosen by Irish black-metal band Eternal Helcaraxe.

Many black-metal bands are drawn to imagery that conveys bitter cold and bleakness, yet the words that came to me as I listened to this band’s wonderful recent release, To Whatever End, were “sweeping”, “soaring”, “anthemic” — and yes, “epic” (my NCS cohort Alexis will try to shoot me for using that word, but a better one isn’t coming to my lazy mind). I just fucking love this music. (more after the jump . . .) 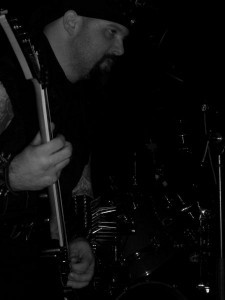 Eternal Helcaraxe departs from BM-standard in other ways as well, and the word that sums up those differences is “variety”. There are moments of light to accompany the dark, and passages of relative quiet to accompany the tumult. The rhythms are dynamic, varying within songs from full-bore assaults to mid-tempo arrangements of intensely melodic music.

In the realm of the guitar, both the chord riffs and the arpeggio leads display a variety of tones and techniques, rather than a steady diet of tremolo cascades. The drumming is also far more inventive than the traditional fusion of blast beats punctuated by an occasional roll across the toms. In fact, the drums are frequently electrifying; the rhythmic patterns and techniques are intelligently designed, often ferociously acrobatic, and always riveting.

The production is also a distinguishing feature — it’s sharper and cleaner than what you’ll hear on many black-metal releases, and it suits the music.

The album begins with an introductory instrumental track called “And As Kings We’ll Fall”, a piano melody with orchestral keyboard elements added that convey feelings of longing, sadness, perhaps wistfulness. It fades to silence, and the silence is then broken by the album’s title track, “To Whatever End”.

And that song begins with a menacing riff, but by the end it strikes a tone of defiance, even triumph. We also get our first taste of deep and mid-range strangulated vocals with icicles hanging off them — a recognizable Nordic brand of harshness that here, as on other melodic black-metal albums, provides a satisfying contrast between the raw and the vicious and the sublime. 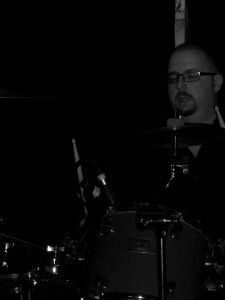 But remember, variety is the name of this game, and so “To Whatever End” also includes near-clean baritone vocals and, near the end, mid-range cleans as well, which add a folk element to the sound. It’s a song packed with memorable melodic lines, and it’s not the only one.

“Kin Comrades and Country” begins with acoustic guitar strumming but eventually becomes dramatic, harsh, pummeling, and grim — though never losing the threads of melody that make it so memorable. And you may feel a compulsion to throw back your head and scream the chorus along with Praetorian’s vocals.

“Strike” is the most unrelentingly forceful song on the EP — the most consistently driving in its pace — and the closest to traditional black metal, with a barrage of blast beats and a blaze of tremolo guitar, but it too is infused with crashing drums, a soaring melody, and the accents of a swirling guitar lead. It turns out to be just as anthemic and memorable as all else on the record.

And the last song on this demo/EP, “All the Battles to Come”, draws everything together. It’s a song that makes the most of its ten-minute-plus length. The intro blends the rolling rumble of thunder together with acoustic guitar strumming (which appears again in a break half-way through), and the instrumental majesty of the song continues as the traditional metal instruments dive in. The main body of the song combines the melodic sweep that characterizes the album as a whole with fascinating drum rhythms and crashing cymbals, and powerful guitar riffs and leads. At the end, choral female voices lead the song to its conclusion with a beautiful, wordless melody — accompanied by a full-on drum onslaught, of course.

Only four songs after the instrumental intro, but each one stands proudly. These Irishmen have a knack for the songwriting craft and what they’ve produced is all killer, no filler. We don’t have a favorite song — they all compete too closely for our affections. But we picked this one for you to hear. This song and another are available for free download at this location. 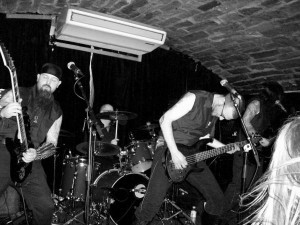 Between the time we first heard this album at the request of the band and the posting of this review, Eternal Helcaraxe signed to the Abyss Records label, and we’re truly fucking pleased to report that the band is now planning to release their first full-length album in the autumn of this year. That will be something to which we’ll look forward with hunger.

For an extensive worldwide list of distributors offering To Whatever End, go here. And for more info about Eternal Helcaraxe, here are links for their official site, their Facebook, and their MySpace page.

And now, as promised, here’s the passage from a chapter in The Silmarillion called “Of the Flight of the Noldor” that describes Helcaraxe (yeah, we can do the Tolkien geek-out with the best of ’em):

“The Noldor came at last far into the north of Arda; and they saw the first teeth of ice that floated in the sea, and knew that they were drawing nigh to Helcaraxe. For between the land of Aman that in the north curved eastward, and the east-shores of Endor (which is Middle-earth) that bore westward, there was a narrow strait, through which the chill waters of the Encircling Sea and the waves of Belegaer flowed together, and there were vast fogs and mists of deathly cold, and the sea-streams were filled with clashing hills of ice and the grinding of ice deep-sunken.  Such was the Helcaraxe, and there none yet had dared to tread save the Valar only and Ungoliant.”