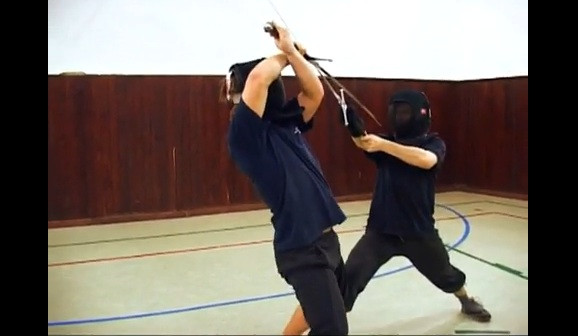 Time for another of our irregular installments in this series, which features things we’ve recently read or seen that we thought were metal, even though they aren’t music.

We have three items for you today: A bit of education about an ancient form of swordplay that we didn’t know existed, including a video demonstration set to metal; a piece of news about an unusual (and nasty) form of political protest; and our prize for the most metal ad from Super Bowl XLV.

For this first item, we owe our thanks to long-time NCS reader and commenter tabiris. He e-mailed us about a form of fencing we’d never heard of before. When we think of fencing, we think of those matches included in the Summer Olympics, with men and women wielding whispy implements called foils, or sabres, or épée, with points scored by a “touch” using an electronic scoring apparatus. (Kendo also comes to mind, but that’s another story).

That stuff is undoubtedly very difficult to do, but it doesn’t look metal. Seems like it’s all finesse, and although finesse has its place in metal, it’s a small place. Well, there’s another kind of fencing that certainly involves skill and finesse, but it looks a whole lot more metal than Olympic fencing.  (more after the jump, including our typically tasteless commentary . . .) 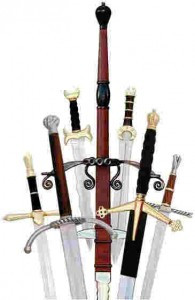 This kind of fencing is done with European longswords. What we learned from tabiris is there are two main schools of European longsword fighting — the German tradition and the Italian tradition. Tabiris trains in the German school, which is based on the cryptic texts (the “fechtbuch” or fighting manual) of a 14th century fencing master named Lichtenauer, as interpreted by subsequent masters.

Apparently, the fechtbuch wasn’t limited to longswords, but included chapters on ringen (wrestling), use of the dagger, and kampfringen, which means battle wrestling. Seems like kampfringen was way nasty, with sophisticated techniques such as fingers in the eyes and grabbing of balls. Nowadays, we just call that bar fighting.

But back to the longsword fighting: We have a video of two guys demonstrating certain of the European techniques. Sure seems metal to us, and it’s got some suitable musical accompaniment. Check it out:

At the end of this post, for those who are interested, we’ve got some links that tabiris provided, including places where you can buy swords. I can think of spots I’ve been in where a good sword would have come in handy, at least for the sheer “what the fuck?!?” effect it would have generated.

This headline caught our eye. It doesn’t tell you very much, standing by itself, but it does kinda suck you into the story, doesn’t it?

Rats! Good for protein and protests in Uganda

KAMPALA (Reuters) – A man who ate a rat in front of Ugandan President Yoweri Museveni in 2005 is threatening to repeat what he says is a traditional form of protest used to bring change. 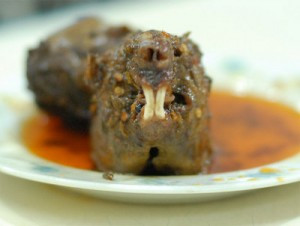 Fuck, now that’s what I call dedication to the cause. About the only kind of political protesting we get up to here in the U.S. of A. these days is marching, chanting, and carrying signs. Compared to eating a live rat in front of a government official, that’s pussy shit.

John Ojim Omoding, 79, told the Daily Monitor newspaper that his grandfather ate a live rat in front of British colonisers in 1947, persuading them to make the eastern Torora area a county.

This rat-eating thing seems to run in the Omoding family. Seems to have done the trick with Uganda’s colonial masters back in 1947. We can imagine how that went down: The Brits screamed, “You fucking disgusting wanker, pleeeeze don’t do that again! You can have your bleeding county!”

Now Omoding wants Tororo (more than 150 km (93 miles) northeast of Kampala) promoted to district status and says he may eat more rats in front of Museveni. . . . “Awarding us district status would reunify us. I can eat more rats before the president if that would make him listen to our plight,” he said.

Fuck, if I were the president of Uganda and there were a risk I’d have to see this kind of thing twice, I’d think seriously about Mr. Omoding’s demands. Apparently, the first time Omoding pulled this stunt, it had an effect . . . of sorts.

Omoding’s 2005 rat-eating stunt made headlines in Uganda and some say prompted Museveni to set up two commissions which recommended Tororo be made a district. The recommendation has not been followed up.

Ain’t that always what happens? You do something that actually puts some pressure on a government official to make a decision he doesn’t want to make, and he appoints a fucking “commission” to study the problem. And then six years later you have to eat another rat.

Another Super Bowl is behind us, and we offer our heart-felt congratulations to the Green Bay Packers — not because we’re big fans of the Packers, but because they defeated the Pittsburgh Steelers (or, as many of us in Seattle have called them since 2005, The Fucking Pittsburgh Steelers).

The Super Bowl ads were the usual mixed bag of groaners and near-genius. Some of the ads appealed to the sophisticated taste in humor for which NCS is known far and wide, such as these next two:

But the ad that got our prize for the most metal (actually, it may have been the only Super Bowl ad that we thought was metal) was this one for a car called The Optima. Lots of cool shit happens in it, including a nice metal howl from the Mayan dude. Only problem was, we could tell this thing wasn’t real, cuz there’s no way Poseidon would have wanted The Optima that bad. These advertisers must think we’re really gullible, but everyone knows that you can’t drive a car under water (though Finns can sing under water), and besides, Poseidon could need a full-size vehicle.

Other things happened in the Super Bowl broadcast (besides football), such as the utterly soul-less halftime performance. We would be tempted (only tempted) to eat rats in protest of the awfulness perpetrated by Slash and The Black-Eyed Peas, except . . . it’s . . . too . . . fucking . . . late. Plus, whoever organized that monstrosity wouldn’t give a fuck what a bunch of rat-eating metalheads think anyway.

Now, here are those links for those of you interested in following up on the European tradition of swords and sword-fighting, with tabiris’ explanations. And if anyone else out there is into sword-fighting, leave us a comment. I don’t think it’s right for me. With my luck, I’d take one in the throat during the first practice session. I would be more suited to a style of martial arts that involves rude gestures and no actual physical contact.

“A really nice site with loads of info and a very helpful community:

“A site for one of the groups:

“A couple of swordmakers (a longsword will cost you anywhere from 160 euro to 5000, depending on how demanding you are). This is a very nice Czech swordmaker, makes pretty damn good stuff. Mid-price range (300+euro):

“Currently, I own a sword from this guy. His longswords are a bit too heavy, but the prices are very nice (160-240 eur), and some of the swords are amazingly beautiful. This is an ideal maker for those who just want to have a sword.

“One of the better retailers: