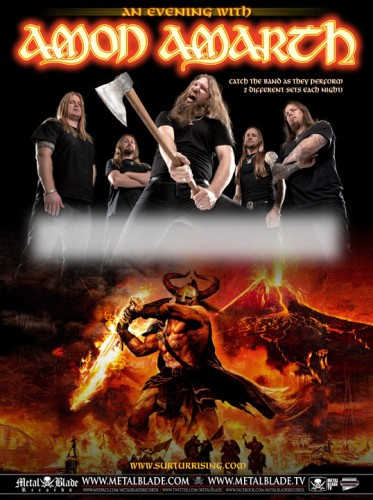 You knew the Vikings were coming, and now there’s confirmation.  Amon Amarth have just announced their 2011 U.S. headlining tour. Usually, the word “headlining” implies that other bands will be following along in the caravan, but this tour is a different kind of animal — because Amon Amarth will be playing without any supporting acts.

It will be called “An Evening With AMON AMARTH” — which sounds more like dinner theater or a Vegas lounge act by some over-the-hill solo vocalist than the kind of titanic ass-kicking that’s really in store for us.  What we’ll get will be two separate sets each night: In one set, the band will play the forthcoming Surtur Rising album in its entirety. In the other, the band will presumably play a setlist of songs from their previous discography.

The marauding is scheduled to kick off on April 14 in Chicago, Illinois and close in Philadelphia on May 7. Sadly for our brothers and sisters north of the border, there are no Canadian dates. The whole schedule is right after the jump.

“AN EVENING WITH AMON AMARTH”

Tickets are on sale now.