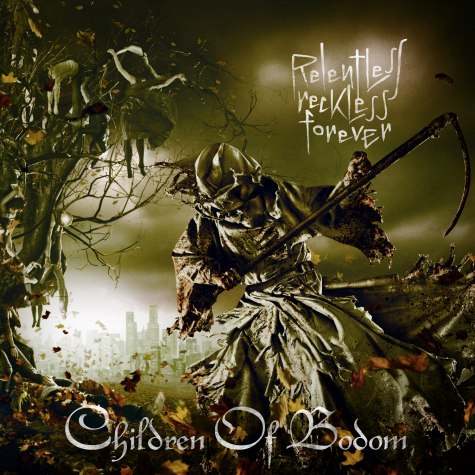 We’ve had previous discussions in these pages about the changes in Children of Bodom‘s music over time, and there seems to be a general feeling of nervousness about the quality of the band’s next album, Relentless Reckless Forever, which will be released on March 8 — particularly because the first single, “Was It Worth It?”, was an underwhelming effort.

Today, the band officially put up a second single from the album for streaming on their Facebook page — though as far as I can tell, you have to “share” the thing on your own page in order to hear it. Then, of course, I found out the song has unofficially been up on YouTube for almost a solid week. A few other metal blogs tuned in to that development before we did, but maybe you’re just as slow on the uptake as we are. And just in case you haven’t already heard the song, you can listen to it after the jump.

And just to be clear, no matter whether you think (like we do) that the band’s music has become increasingly formulaic and — dare we say it — more like heavy-metal pop music than we ever thought possible, this is still Children of Bodom and we WILL still listen when they come out with new music.  And, as it happens, this newest song — called “Ugly” — is a big step up from “Was It Worth It?”

It sounds more like an evil throwback to the days of Hatebreeder. It revives our hope about this forthcoming album.  Here’s what COB bassist Henkka Blacksmith had to say about the song: “‘Ugly’ is [one of] my top 2 [songs on] the album. I love the beginning. I love the COVENANT-style verse and the punk chorus. The weird pre-chorus or second verse, I don’t know how you call it, is a really good riff, and it shuffles the structure of the song by ending the song, too. The solo on the very simple solo background is really groovy. This is a simple but heavy one!”

2 Responses to “CHILDREN OF BODOM: UGLY”