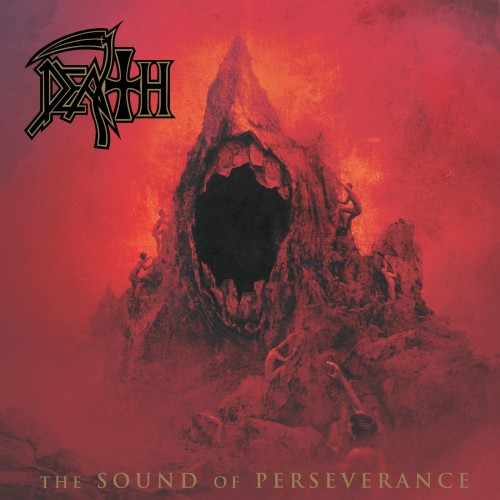 Today super-quality metal label Relapse Records is releasing a re-master of Death’s seventh and final studio album, The Sound of Perseverance. The re-master will come with a slew of extras including liner notes from cover artist Travis Smith (Opeth’s go-to man) and guitarist Shannon Hamm, as well as a second disc of unreleased material. Order it from Relapse themselves, or on iTunes, and get a third disc of bonus material.

But, to be honest, all that rigamaroll may just be distracting you from what’s at stake here: a great opportunity to re-visit one of the very best metal albums ever made. Unreleased tracks and demos are just empty calories on one of the leanest and most ruthlessly efficient musical death machines ever put to tape.

These days it seems to me that Death doesn’t get mentioned alongside classic American DM bands like Cannibal Corpse, Suffocation, and Deicide. This makes sense; Death was always the odd band out. Death began brutal and grew more melodic and complex with TSoP being the culmination of that evolution.

In fact, The Sound of Perseverance is as much a power metal record as a DM record (Schuldiner had composed some, perhaps all, of the material with his trad-metal outfit Control Denied in mind). That it functions so well as a slice of brutality as a series of guitar playing exercises is a testament to the forward-thinking nature of Chuck Schuldiner. (more after the jump, including some of the re-mastered songs . . .) 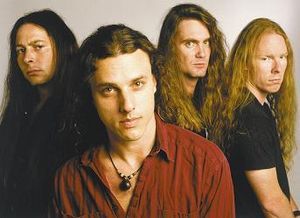 Most bands blend specific elements of other styles together and in so doing fragment metal into even more obscure and clunky subgenres. Death brought whole styles together—The Sound of Perseverance does not blur genre lines, it renders them moot.

The record itself has a gloriously dry, clean production that seems designed for maximum penetration. No matter how harmonious, the guitar tracks cut like chainsaws. The drums pop in that wonderful way that computers have yet to replicate, and the bass tone is full, rich, and heavy.

The most unique sound in the record is Schuldiner’s voice: He abandons the death growl entirely in favor of a piercing shriek that is easily understood, highly expressive and suitably inhuman. Although it may be the direct ancestor of the more high pitched deathcore shriek, I have yet to hear a vocalist imitate it or pack as much feeling into such vocals.

TSoP’s power can be measured objectively by the glut of modern bands and genres that transplant integral components of their sound from it. Dragonforce’s hyper melodic turbo shred? Present. Djent’s love of jazz? As much here as on Cynic’s Focus and Atheist’s Unquestionable Presence, but more seamlessly blended with the bursts of thrash and downtempo death marches.

In fact, the earliest example of the much maligned melodic metalcore breakdown I can find is on my favorite track, “Flesh and the Power it Holds.” (This song has the fascinating honor—coming from a man who loves his intercourse—of being perhaps the only pro-abstinence death metal song. It’s the only one I’ve ever heard of.) Here’s the re-mastered version of the song:

It is worth noting at this point that one of the areas in which The Sound of Perseverance has rarely been equaled is in its lyrical content. Schuldiner’s words on the record are a masterful exploration of the inherent cruelty present in the human condition, the behavior patterns of people who harm one another.

Particular focus is spent on the nature of those who manipulate and harm for personal gain, such as in the lead single, the almighty “Spirit Crusher.”

TSoP asks the question: how can a good person survive in a world filled with evil and not become evil his-or-herself? The answer is all in the title. Rarely has metal grappled with such abstract and crucial issues with as much grace and gusto.

The album proper is eight tracks, but the ninth and final song is a cover of Judas Priest’s “Painkiller.” It is, in my opinion, the rare cover that betters the original. Death’s interpretation of the song may be one of the few tracks that exemplifies extreme metal, extravagant excesses and all. If I were to attempt to introduce extreme metal to someone who had no idea what I was talking about with a single song, this would be the one.* It stands on its own.

The colossal statement that is The Sound of Perseverance serves only to underline the tragedy of Chuck Schuldiner’s untimely demise. He was, like so many of our fallen heroes, too young, and too talented. He is sorely missed—judging by his work he was not only a guitar hero, but the sort of man I would have liked to share a drink with.

The point is, whether it’s your first time or the latest of many, today is a great day to listen to a masterpiece and maybe (just maybe) support the memory of a great musician and the amazing label that is keeping his work alive.

*other relevant examples would be Slayer’s “Reign in Blood,” Behemoth’s “Conquer All,” and Belphegor’s “Bondage Goat Zombie.”

12 Responses to “DEATH: THE SOUND OF PERSEVERANCE”