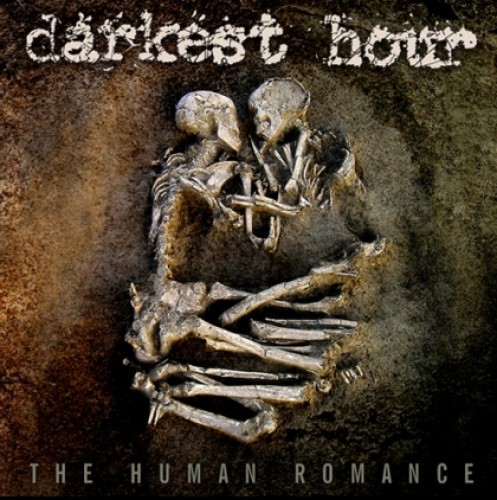 Our UK contributor Andy Synn checks in for the second day in a row — this time with a review of Darkest Hour‘s latest album, The Human Romance, which is being released today.

Seven albums. Seven full-length albums of original songs. That’s a lot of material, stemming from Darkest Hour’s punky early origins to the more streamlined and expansive sound of modern times, touching base with hardcore, thrash and death metal along the way. After all this time, however, it wouldn’t be blasphemous to wonder if the band still have anything left to offer that is in any way better or different.

Thankfully, the answer to that question is yes, with perhaps a greater emphasis on the “better” rather than the “different”. Although definitely more aggressive than any of their post-Hidden Hands… albums (although this was hinted at by The Eternal Return), The Human Romance also sees the band using the means and methods of their traditional sound and song-writing style to explore different melodic textures.

Despite some initial reservations about the band potentially repeating song structures and styles from their previous releases, I have found the album to be a more intelligent, refined variation on their core sounds. Some sophisticated new elements are utilised in an unobtrusive manner, so that the album, whilst fiery and heavy, is most rewarding after repeat listens. (more after the jump . . .) 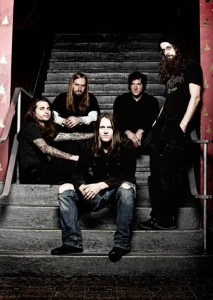 The rather throw-away introductory track, the 1:16 of “Terra Nocturnus”, is the album’s lowest point. Unable to recapture either the emotional depth of “Doomsayer” or the feverish anticipation of “With A Thousand Words…”, the song fails to achieve any sort of connection with the listener. Perhaps it is the lack of connection with a specific song (in that it leads up to, but is not part of “The World Engulfed In Flames”) that is the problem, as it lacks any sort of internal climax and simply seems to fade away before really introducing the music proper. A rare miss it seems.

Thankfully, any taste of disappointment is quickly washed away by the start of “The World Engulfed In Flames”, whose classic In Flames-esque introductory melody harkens back to an earlier, earthier age of melodic death metal. The song itself comes across as a modern day re-imagining of The Jester Race era of IF, without coming across as derivative or trite. The winding, classically influenced chorus lead is a nice and original touch, and the weaving tremolo melodies behind the main verse riffs offer a great contrast. The bridge takes a slight detour into proggier realms, bolstered by the perfectly placed drumming of Ryan Parrish, as the riffs flirt with less standard timings and unusual harmonies.

Although the album primarily portrays a faster, more aggressive Darkest Hour, the band are careful at times to strike a balance between this new-found aggressive fervour and the massive, distinctive melodies that they have become known for.

Thrash-tastic song “Your Everyday Disaster” epitomises the more straightforward, aggressive style, and is one of the shortest songs on the record at only 2:48 in length. The vocals are ferocious but instantly memorable and the guitars weave just the right amount melody into their metallic fury to hint at a sense of subtlety without reducing the intensity of the song’s attack. The solo in this song is a real treat, ably showing the shredding chops of Mike Schleibaum (always considered the weaker soloist of the band’s two guitarists, at least technically) along with his distinctive sense of feel. 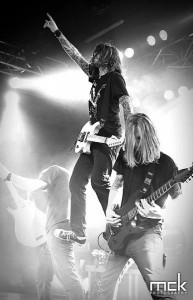 Follow-up “Violent By Nature”, as its title suggests, is even more aggressive and shorter than its predecessor. At only 2:22 long it quickly establishes itself as one of the heaviest numbers on the record, unrelenting kicks powering the song forward while the riffs favour power and dissonant harmonics over overt technicality. Thematically, the song is clearly the most violent and propulsive on the record, chugging and faster, louder and heavier than before, with a massive title-refrain of hardcore-styled, almost death metal vocals and a dark, foreboding bridge that adds an element of malignant, predatory danger to the song.

Marginally less heavy, but more oppressive in mood, “Man & Swine” has a strange vibe to it, darker riffing setting it apart from a lot of the band’s material in many distinct ways. The angular, stop-start riffing adds a new element to the guitar sound thus far and serves as an interesting respite from the heads-down attack of the other songs. The song seethes with barely contained rage, John Henry barking violently over jagged, punishing rhythms, while structurally the song is a lot more linear and less repetitive in nature than its more standard-ly structured brethren. The eerie backing vocals that come in during the closing third of the song seem very much something that past collaborator Devin Townsend would employ, working as a perfect foil to the strained, cathartic screams that otherwise dominate.

Representing the melodic side of the record, the previously heard “Savor The Kill” mixes post-Soilwork riffage (first hinted at on “Deliver Us”) with a surprisingly progressive angle and a sense of swagger in the chorus vocals, accented by the furious drumming of Ryan Parrish. The punchy, heavy opening to each verse showcases Darkest Hour revelling in the complexity of simplicity — a thumping, stomping beat and a stop-start riff augmented by subtle backing guitar melodies and throbbing bass, before leading into a catchy as hell pre-chorus based around an insistent lead melody.

The solo section showcases a much more restrained side of Mike “Lonestar” Corrigan, obtuse tapped melodies eventually graduating into a flowing solo that paints a singular picture. Beneath it all is the phenomenal playing of drummer Ryan Parrish, who reels off an array of snappy, tasteful fills and kick rolls whilst maintaining a constant yet interesting beat. 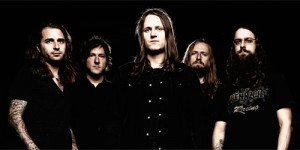 “Love As A Weapon” opens with a mournful, semi-distorted pattern of ringing, picked notes before slowly developing into a more involved piece of tasteful, harmonised lead work and driving drumming. The bouncy main riff comes as something of a shock at first, but again conceals the band’s clever use of backing, second guitar parts to add subtle complexities to even the most simple moments. The unforgettably catchy chorus involves the use of John Henry’s rarely demonstrated semi-clean vocal range, dripping with emotion as much as his screams. The calm, reflective break part-way through the song shows the band demonstrating their knowledge dynamics with their quiet, considered playing suddenly exploding into an explosive, fiery display of guitar pyrotechnics and passionate vocal fury. Quietly sung backing vocals help complete the total package, the song movingly echoing a variety of moods and themes.

Probably the most forgettable (although still good) song on the record, “Wound” is a direct, upbeat number with a haunting chorus lead whose primary importance is found in the builds towards a driving mid-section which combines a dirty, semi-clean vocal refrain with a minimalist lead part, over a restrained, melodic chord progression that pulses with energy.

“Purgatory” straddles the divide between the heavier and melodic sides of the band’s repertoire, the interplay between ferocious screams and crunchy, damaging riffing, particularly during the chorus, balancing out the Gothenburg-on-steroids speed and melody of the rest of the song, all the elements just gelling seamlessly. The piercing leads and hammering rhythm guitars of each chorus balance each other perfectly, while the solo is short but perfectly formed, managing to build subtly and end powerfully in a very short space of time. Once again the backing vocals add a welcome touch of variety near to the end of the song, as well as an additional sense of mood and depth. The end is a treat as well, simple but exactly what was needed. 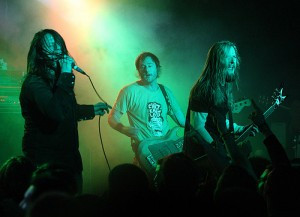 “Severed Into Separates” is a bit of an oddity, as whilst very melodic it is also the punkiest song on record, more simplistic in structure and based around fewer melodic progressions and fewer riffs, but still insistently catchy for all that. The punk-inflected opening gives way to an infectious refrain riff, followed by a verse juxtaposing traditional Gothenburg-style string skipping riffage against ringing, shimmering chords before the band employs the infectious refrain riff for their needs as an undeniably effective chorus. The dark bridge leads into a beautiful solo with several different sections to it and a real sense of variety to its approach and tempo shifts.

Powerful instrumental (with keyboards courtesy of Kirsten Randall) “Terra Solaris” has some great moments but ultimately doesn’t quite reach the same transcendent heights as “Veritas, Aequitas”, its genetic forebear to whom it will inevitably be compared. Placing this comparison to one side however, the track flows perfectly from start to finish through a number of different mood-scapes and allows both guitarists even more room to express themselves in different manners, free from the constraints of a single, prescribed direction.

The acoustic and string led mid-section is the song’s real high point, featuring gorgeous waves of emotive strings, reverberating bass and intimate, intricate clean guitars which consciously reference the band’s melodic history. Thankfully, this high is maintained until the song’s end via the phenomenal solo that follows it and the emotionally charged riff, ably supported by some great bass playing by the underrated and under-stated Paul Burnette, that drives the song towards its conclusion.

Final track “Beyond The Life You Know” is true, vintage Darkest Hour through and through, edge-of-the-seat melodic death metal guitar runs providing the impetus for the raging vocals which utilise a slightly higher range at key points, as well as some well-written layering during the chorus. 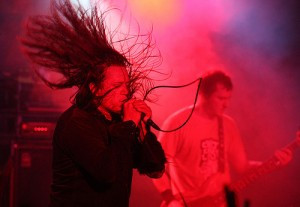 The band’s love for The Crown shines through on this track, albeit in a much more melodic manner, as the structure and energy comes straight from the under-appreciated Swedish melodic death/thrash masters. The sheer passion for metal drips from the band’s every pore, the guitars blazing hell for leather whilst impassioned battle-cries ring out above. The more mid-paced moments of the song simply provide extra ballast for when the guitars and drums race off once more at full-pelt, the song building an unstoppable momentum up to the point where it all crashes down into a ringing, fading guitar pattern and some intimate, ethereal vocals.

It’s fair to say that all the members are performing at their peak on this album. The vocals have never sounded so raw and impassioned, the riffs have never had more bite, the solos soar, the bass rumbles proudly and the melodies infect voraciously. Mike “Lonestar” Corrigan should get some real credit for his interesting, classically influenced playing which has now been firmly established as a key component of Darkest Hour’s sound, and Mike Schleibaum (the mastermind behind the whole thing) has come up with some of his best riffs ever. 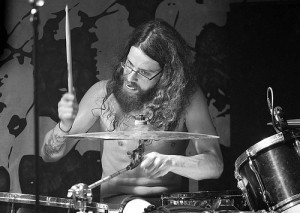 The real MVP, however, is drummer Ryan Parrish whose playing is almost perfect, stylistically varied enough to surprise, but always written to the greater benefit of the song above all else. In addition his power, speed and impressive hand-work have all seemingly stepped up a notch, making him the real driving force behind the album’s flashier elements.

The album as a whole strikes me as an improvement upon The Eternal Return, an album I loved, in that it more cleverly melds the heavier and melodic sides of the band’s repertoire, albeit with certain songs leaning slightly more one way or the other. The subtle nuances are much more pronounced in their usage, as the secondary guitar parts are far more interesting and clever and the band’s employment of backing vocals adds an entirely new dimension to the vocal dynamic.

Overall, I’d easily put this record near the top of the band’s discography, as it melds the heart-stopping speed and aggression of the band’s roots with a more ambitious, progressive bent that defies the restraints of tight structuring and short song lengths the band use.

EDITOR’S NOTE: For a taste of The Human Romance, have a listen to this, the album’s final track:

[audio:https://www.nocleansinging.com/wp-content/uploads/2011/02/12-Beyond-The-Life-You-Know.mp3|titles=Darkest Hour: Beyond The Life You Know]