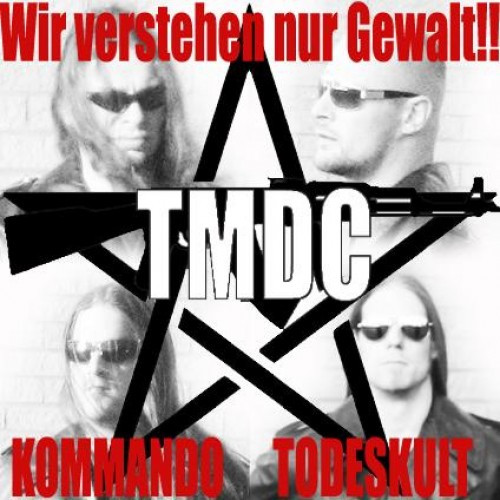 We don’t usually start the week with one of these posts, but I got jammed up with non-blogging life over the weekend and didn’t get it done for Sunday. I hate when life does that.

So, here we are, late as usual. But the rules of MISCELLANY haven’t changed: I look at the NCS running list of bands we’re interested in checking out, compiled from e-mails, press releases, MySpace friend requests, and the whisperings of my cat. The thing about the list is, it’s limited to bands whose music we haven’t heard. I stab names off the list, more or less at random, and I go listen to a song (or maybe two). I record my reactions (to make myself feel important), and then make the songs available for you to hear, too (given the remote possibility that you might feel like making up your own minds about the music).

For today’s foray into the unknown, I listened to a new track from Monolith Deathcult (Netherlands), a couple new songs by Neongod (Norway), and new music from The Doomsday Prophecy (New Jersey).

I’m not sure why it took me so damned long to listen to this Dutch band. They’ve produced four full-length albums since 2003 — though the most recent (The White Crematorium 2.0) was a re-recording of the band’s second album. I’ve read about them here and there, but never took time to listen, even after the controversial buzz generated by 2008’s Trivmverate. (more after the jump . . .) 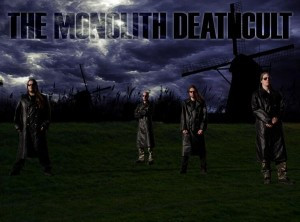 What finally pushed me to do it was a recent item in Blabbermouth about a new song, with one of the longest titles I’ve seen in a while: “Aslimu!!! – All Slain Those Who Brought Down Our Highly Respected Symbols To The Lower Status Of The Barren Earth”. Based on my snooping around the band’s Facebook page, the song appears to be a demo, in the sense that it will likely be re-recorded and significantly changed before it appears on the band’s next album — if it appears again at all — but it’s a finished song in every other sense.

The news item I saw quoted guitarist/vocalist Michiel Dekker as follows: “The lyrical theme of this track is mainly based on Lawrence Wright’s book The Looming Tower. Besides that I was inspired by the Dua-e-Sanam-e-Quraish curse and the events around the Muslim Brotherhood.” None of that made any sense to me, so I decided to get educated. 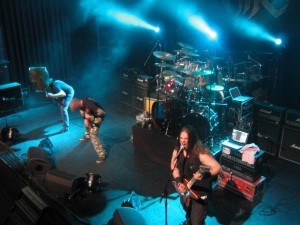 Turns out that The Looming Tower is an account of the 9/11 attack on the Twin Towers that won the 2007 Pulitzer Prize for nonfiction, and the Dua-e-Sanam-e-Quraish is a prayer asking Allah to curse and destroy the enemies of Mohammed. Oh, and the first word in the song title — “Aslimu” — means “submit!” Having learned a few things, I listened to the song.

Right from the beginning, it’s an overpowering onslaught of swarming guitars, powerful bass blasts, and unrelentingly furious, inhumanly rapid drumming. The vocals sound like a multi-species menagerie of ravenous creatures, and synthesizers are employed to inject the mayhem with everything from shrieking noise to waves of epic reach. The pacing in the latter part of this long song staggers into a slower instrumental segment, still driven hard by the inhuman drumming and the groaning bass line, but carried away in the upper register by swirling electronic effects.

The sound is dense, multi-layered, and very interesting. I was pretty fucking taken with it, and left hungry for more of what TMDC has in store for us with the next album. Check out “Aslimu!” for yourselves:

The band projects that their next album “tentatively” will be released before the end of this year. For more info about Monolith Deathcult, you can visit their official site, their Facebook, or their MySpace.

P.S. In poking around to learn more about TMDC for this post, I learned that although the band is very serious in its approach to the lyrical content of their songs (with often eloquent lyrics about tragic historical episodes of mass slaughter, among other subjects), they sure as hell don’t take themselves too seriously. Witness this excerpt from the band’s “biography”: 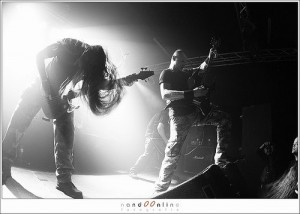 “The Monolith Deathcult holds the conviction that death metal has reached a ceiling in terms of speed. It doesn’t really get any faster than Cryptopsy and any more brutal than Hate Eternal without flurrying away in one great big cacophony*). This is why The Monolith Deathcult has decided to broaden the genre by inserting previously ‘not done’ elements into the style, adding to the brutality and speed. . . .

The Monolith Deathcult doesn’t make artist-centred music and won’t gorge on technicalities only trained ears will hear and appreciate. If people want to see virtuoso techniques they can go out and rent a Steve Vai DVD. The Monolith Deathcult sees the audience banging their heads on the primeval forces of the pounding 4/4 beat, and have set themselves the goal to broaden  their extreme (death) metal with influences from techno/dance and industrial music, completed with Wagnerian classical pomposity. All this is topped with an image of irony, black humour and bad taste, in combination with a morbid fascination for everything that is ‘wrong’.

*) The more observant reader and listener will need only a single note to notice the flagrant discrepancy between us and the mentioned bands. This is due to an appalling lack of talent in the members of The Monolith Deathcult. It’s no wonder we play guitars with extreme body shapes to mask our lack of talent.” 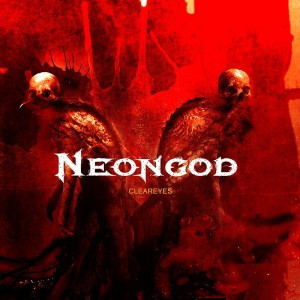 We’ve written repeatedly about Misantrof ANTIRecords, the non-profit, antcommercial label run by Carpathian Forest‘s bassist Daniel Vrangsinn. Misantrof artists retain all rights to their music, and Misantrof makes the music available for free download on its site. I’ve found many cool discoveries on Misantrof, and so when I read about a new Misantrof release, I usually make it a point to go check the music.

Neongod’s five-song EP, Cleareyes, is the latest. The band was formed in 2003 and recorded two demos before their 2008 debut, Disease Inc. Everyone in the band plays in other projects, including Carpathian Forest’s Anders Kobro on drums.

I listened to the first two songs on the EP for this episode of MISCELLANY: “Zitadelle” and “Cleareyes”. And guess what? Contrary to popular belief, it’s not against the law to play music other than black metal in Norway.

“Zitadelle” begins with the wail of an air raid siren, and it’s fair warning. What follows is a massive explosion of rapid-fire thrash, fast as blazes and filled with face-melting shred and sneering vocals, undergirded with industrial-style rhythm riffing that sets up body-convulsing shudders. It’s raw and relentless, and damned fucking good. The title track that follows immediately got my head snapping with a more mid-paced riff that’s just killer. It’s a ragged stomp of a song, a steel-booted kick in the jewels, less thrash and more Pantera in its style, but just as irresistible as the first track. More pounding rhythms, more blowtorch shredding, more nasty vocals. Awesome.

Here’s “Zitadelle” to sample — but you should do what I’m going to do after I finish this post — listen to the rest of this beastly EP.

You can learn more about Neongod and download the Cleareyes EP for free at their Misantrof band page (here). 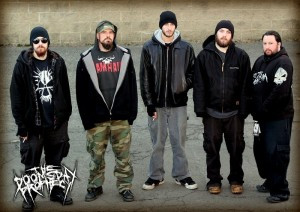 We got an e-mail not long ago from this unsigned New Jersey band, with an invitation to listen to their music. The Doomsday Prophecy has only been in existence since 2008, but it seems most of the members have been playing for much longer in previous projects.

The band have recorded a demo album, not yet released, but five of the demo’s ten songs are available on The Doomsday Prophecy’s ReverbNation page, and I listened to the first two — “So Easily Raped” and “Long Lost Friend”.

That first song, with the disturbing title, is a meaty dose of modern death metal that got me bouncing up and down: Lots of fancy riffing and tempo changes, a tight rhythm section that punches hard, and a mix of hair-raising shrieks and bestial growls in the vocal department. It’s a song that’s both chaotic and catchy and it will be easy to return to it.

“Long Lost Friend” launches with more skittering riffs and bullet-spitting drums, then settles into a down-tuned, tremolo-picked melody accompanied by more of those tag-teamed vocals. About mid-way through there’s a very cool change in guitar tone with a variation in the principal melody before the return of those tremolo chords and that very satisfying, ass-on-fire shrieking.

This is damned impressive music by a band that sings and plays with passion and technical flair, and reminded me of The Black Dahlia Murder. I think these dudes are going places. Check out the first song I heard:

The Doomsday Prophecy: So Easily Raped

To learn more about this band, visit their ReverbNation page here or their Facebook page. Now, here’s  ReverbNation widget that will let you hear both the songs I heard plus three more.

That’s it for this installment of MISCELLANY. I’m pretty happy with what I found. Are you?