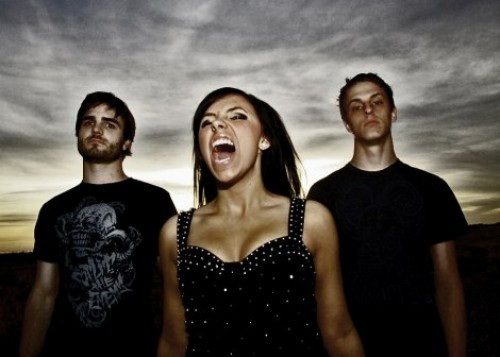 The word “mishmash” popped into my head when I was thinking about a title for this post. I thought I knew what it meant, but to be sure, I checked the Merriam-Webster online dictionary. It defined “mishmash” as “hodgepodge, jumble”. That was really fucking helpful. I hate it when a dictionary defines one word by using other words that are just as opaque.

The same source explained that the word could have derived from the combination of two Middle English words (mysse and masche) or perhaps from the “reduplication” of the Yiddish word mishn, meaning “to mix”. That made me wonder what the difference is between “duplication” and “reduplication”. REduplication sounds REdundant, but what do I know.

Anyway, I gave up on Merriam-Webster and tried another dictionary, which proved more helpful. It defined “mishmash” as: “A messy or confused mixture of different things.” Which explained why the word popped into my head, since my head is itself a messy and confused mixture of things. That definition did confirm that I’d come up with the right post title, because the music I’m serving up today is definitely a messy and confused collection. It could also be a hodgepodge and a jumble, but I’ve lost patience looking up word definitions at the moment, so I don’t know for sure.

Today I won’t make you guess about the music. The songs on offer are from Torture Division (Sweden), Hellen (Arizona) (pictured above), and Vile (California). I recommend them. They are a mishmash of innervating metal. They will also turn the organ you think with into a mishmash. You may even be reduplicated. (songs after the jump . . .) 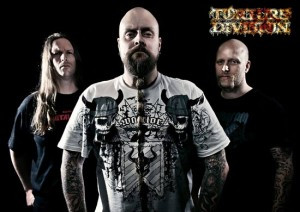 Their mission in life is to create music and give it away, though they are also happy to have your donations if you feel up to it. They have a new demo on the way, which they will give away for free download on their web site in a few weeks. That will be added to the six previous demos they have created since 2008, plus assorted singles, all of which you can also download for free on their web site (here).

What caught my attention was the band’s recent announcement that they had created a cover of the Mastodon song “Iron Tusk” from the most excellent Leviathan album. I also got a good laugh from Torture Division’s announcement of the song:

“Wanna hear what MASTODON really should sound like? We thought so, and that’s why we have decided to record a cover of their tune ‘Iron Tusk’. Why this particular song? None of us listens to MASTODON, you know.

Well, to make a long story short; this cover was meant to end up on a compilation CD (spanning over albums from the 1990s to 2011, and we all know MASTODON‘s a quality act that people obviously dig, recording a tune by them would give us major exposure to further dominate the world… ahem…), that eventually never saw the light of day — meaning we now give it to you because we are absolutely amazing.

The amazing Dan Swanö (ex-Edge of Sanity, Bloodbath, Nightingale) did the production work on the band’s version of “Iron Tusk”, which is pretty much a guarantee of quality. The song is also a blast to hear — as in, it will hit your fragile bodies like a blast-front spreading at the speed of sound from the point of detonation. Damn, this one is very sweet. Check it out: 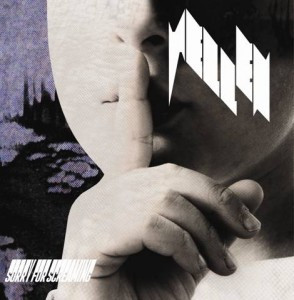 Metal bands whose lead singers are also the drummers are rarities. Even more rare is a metal band whose vocalist/drummer is a woman. Hellen is one of those rarities. This Arizona-based trio consists of Mindy DuPonte on drums and vocals, Ryan Abel on guitar, and Andrew Heath on bass. They’ve just released their full-length debut. Instead of affixing it with a rancid title, such as Gutted With A Garden Spade and Left to Putrify in the Sun, they brilliantly called it Sorry for Screaming.

Though the album title may reflect a certain politesse in attitude, the music is anything but polite. In the spirit of mishmash, I included this band in today’s line-up because the music is more than a little outside what we typically cover at NCS: It includes clean singing. It also straddles the line between hard rock and metal. Still, I be diggin’ it for two reasons: One, it’s loaded with infectious hooks and punk attitude, and it made me want to run into things. Two, Mindy’s vocals are impressive; in full-on shriek-mode, she turns herself inside-out with a fury, but man she can also hit the high, clear notes.

Put aside what prejudices you may have about metal that’s close to the line of hard rock, or female vocalists, and give this a shot — for a change of pace, if nothing else:

Sorry for Screaming is available on iTunes and Amazon, and the CD can be purchased through the band’s web site. More info about Hellen is available on Facebook and MySpace. 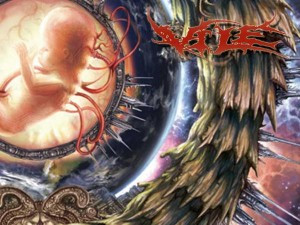 Now, let’s really mash up this post by swinging way over in the other direction.

Californian’s Vile have completed work on their fourth full-length album, Metamorphosis, and plan to release it this coming fall. It’s been a long time coming; the band’s last album came out in 2005. According to Vile, the CD is “a concept album which contains a wide variety of styles, tempos and lyrical topics with an interlocking philosophical and lyrical concept.” I’m not sure what the concept will be, but I’ve seen the lyrics to a song from the album that’s just been put up for streaming, and it seems to center on the fallen angel (you know who that is).

Speaking of that song, it’s called “Prophetic Betrayal”. It will make you bang your fucking head to the beat of some gen-u-ine, brutal and brutalizing American death metal, in the vein of bands like Deicide and Autopsy. Good shit. Based on this, the new CD will be worth looking for.

To follow what’s happening in the Vile camp, here are links to their pages on Facebook and MySpace, and here are the song’s lyrics.

So, do you feel like a hodgepodge now? As always, we welcome your comments about the music, as long as you don’t say anything nasty about us, because our feelings are easily hurt.

21 Responses to “A MISHMASH”