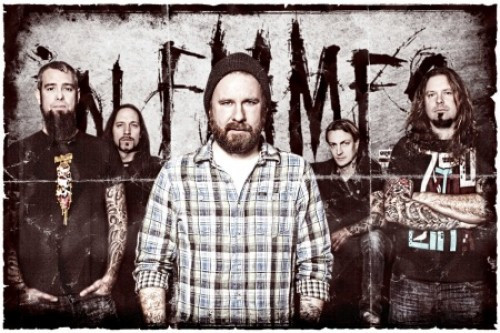 For me, In Flames is a special band. They were one of my “gateways” to extreme metal. My NCS co-founders and I have seen them many times live, and we’ve always gotten a charge out of their shows. We’ve also met and talked with the band, and they are kind-hearted people who don’t come across as egotists, despite their global success. And on top of all that, I’m still a big fan of the music.

Based on a news item from earlier today, I’m getting an uneasy feeling that the distance is going to increase even more when the next In Flames album, Sounds Of A Playground Fading, hits the streets in June. Yes, we now have specific worldwide release dates. We also have the news that In Flames is now signed to Century Media.

And we have comments like this from Anders Fridén in a recent interview: “[One] song begins with a spoken-word part that evolves into a kind of hard DEPECHE MODE-type thing.”  Gulp.  (more after the jump . . .)

Here are the rest of the comments from Anders’ interview with a Swedish tabloid called Aftonbladet, as reported in Blabbermouth:

“We have some songs that pretty much go against the hard rock formula,” he said. “There’s a song called ‘The Attic’ where we have an accordion playing the chorus instead of me singing it. Another song begins with a spoken-word part that evolves into a kind of hard DEPECHE MODE-type thing. We also have some really fast, typical IN FLAMES tunes.”

He added, “We’ve never denied where we come from, but at the same time we like to challenge our listeners.”

And what the fuck is up with that statement about “some songs” going against “the hard rock formula”? Does that mean that the rest of the album, except for the accordion-and-Depeche-Mode things, are going to follow a “hard rock formula”? It creeps me out to think so, and I sure as fuck hope I’m misinterpreting it. Problem is, A Sense of Purpose already drifted perilously close to that verboten territory.

We will see. Here are the release dates:

The first single will also be released in early May, and we will then have our first evidence of whether the creeping dread is justified.

9 Responses to “A CREEPING FEELING OF DREAD”