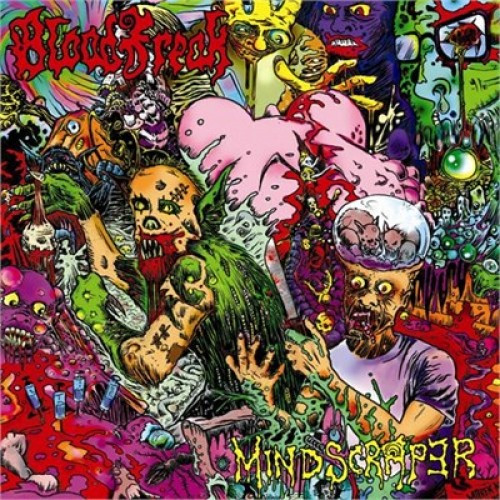 I may not be able to write much during the next two weeks, but that doesn’t mean I’ll be completely invisible. Every now and then I’ll expose myself, figuratively speaking of course,  just so you don’t forget me. However, the exposures will mostly be fleeting, hit-and-run, guerilla-warfare incursions. In other words, my posts will be even more half-assed and unoriginal than usual. The only plus side for you is that they’ll be short.

This post will set the tone for more to come. First, it’s completely unoriginal — I stole the idea from The Living Doorway, which is a blog you should check out if you haven’t already. Second, it’s very short, because I haven’t even listened to the album in question, just the one song featured on The Living Doorway post. And third, because I wrote it, it will be half-assed by definition.

The band is Blood Freak, from Portland. The album is Mindscraper, now out on Willowtip Records. The song is “Pink on the Inside”. The style is “a splattery hodgepodge of bass-heavy goregrind, campy thrashiness, and grooving horror-fueled death metal.” I’m quoting The Living Doorway post because I can’t improve on that description. My own half-assed opinion? I love this song. You may listen to it after the jump.

So, here’s the song — and the cool thing is, you can download this song and one other from the album at the Willowtip site (click here) — for free. At the same place, you can also order the CD.