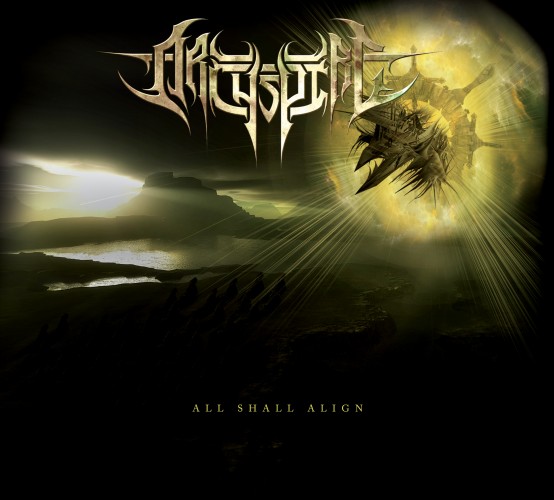 In December, for one of our MISCELLANY posts, we wrote about a then-unsigned technical death metal band from Vancouver called Archspire that had really impressed the hell out of us. The band featured two guitarists who blazed away on 7- and 8-string guitars, a bassist who worked wonders on a 6-string fretless bass, and a drummer and vocalist who matched them stride-for-stride.

By sheer chance, the following month we interviewed  Virgil Palazzolo, the head of a French record label called Trendkill Recordings, and within days of that learned that Trendkill had just signed Archspire to a recording contract — a coincidence that made us quite happy.

Last week, Archspire’s Trendkill debut, All Shall Align, became available digitally on iTunes and it was released as a limited digipack CD in Europe yesterday; the CD will be released in the U.S. and Canada on April 21. That limited digipack CD and a very limited CD/T-Shirt bundle, which features eye-catching artwork by Toshihiro Egawa (Dying Fetus, Suicide Silence, Devourment, and more) are still available at Trendkill’s webshop (here).

A few days ago we learned that the album is now streaming at a French site called Deezer (here). If you’re a fan of bands like Origin, Decrepit Birth, or Spawn of Possession, we think you’ll fall hard for Archspire, and now’s a good time to listen to the album while that stream lasts. If you happen to live in Canada, you’ll soon have the chance to see Archspire live — because they begin a 3-week tour of the country today. Dates and places follow the jump . . . Can you tell that we think this band fuckin’ rocks?