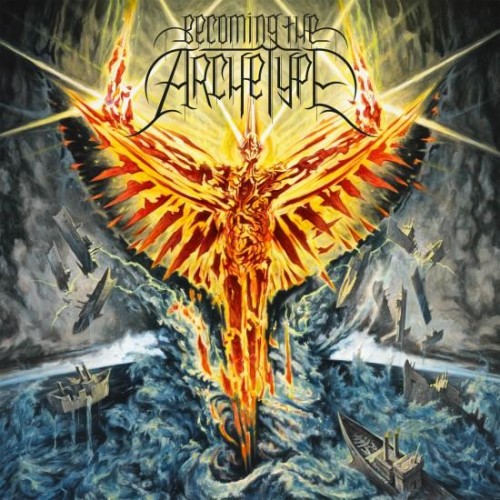 (Today, our UK contributor Andy Synn follows yesterday’s retrospective on Becoming the Archetype with a review of the band’s new album, Celestial Completion.)

Perhaps Becoming The Archetype’s most ambitious album yet begins with the strange, symphonic introduction of “The Resonant Frequency Of Flesh”. Haunting choral voices and a sweeping Danny-Elfman-aping score backed by pounding drums and punchy slabs of guitar, which segues seamlessly into “The Magnetic Sky”, juxtaposing Jason Wisdom‘s familiar, powerful roar with a stunning clean vocal refrain, the first incidence of prominent clean vocals since The Physics Of Fire. The oceanic rise and fall of crushing heaviness and sinuous guitar work showcases the band’s joyous song-writing talents, indulging both their love of metallic force and bright, shining melody.

“Internal Illumination” is perhaps the most purely death metal track the band has done on an album since their Terminate Damnation days, replete with hellishly low gutturals, gripping blast-beat sections and an utterly crushing ending slowdown that drags the listener’s ears through a mire of sludgy riffing and dragging drum fills. It also employs the newly developed blackened screams which are now part of the band’s vocal arsenal, adding further variety to their multi-faceted, expressive vocal arrangements.  (more after the jump . . .) 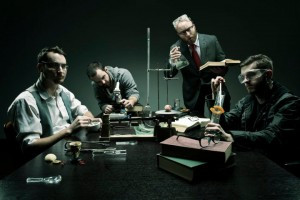 Aggressive and unrelenting, “Path Of The Beam” is characterised by multiple lead parts and flowing harmonies, both vocal and guitar, with a taut, yet elastic structure. The band mines a deep and rewarding seam of elaborate, individual riffs and perfectly poised soloing, equally fervent in its deployment of perplexing rhythmic shifts, shredding lead parts and raging vocal polemic.

The album’s centre-piece is the three part “Requiem Aeternam” series; Part 1 is a beautiful instrumental entitled “Music Of The Spheres”, a mesmerising and haunting piano composition that leads perfectly into Part 2, “Elemental Wrath”, a powerful and complicated arrangement of massive riffs and mammoth grooves.

The lengthy song and ambitious structuring takes in primal screams and distorted robotic vocals, telling a tale of hidden darkness in the depths of the ocean, as boiling, elemental riffs swell and spasm threateningly. From a fret-burning solo section, the band speeds through sections of distorted, inhuman vocals, demonic gutturals and convulsive, destructive blast-beats, leading to a jazzy, mercurial progression of abstract note patterns, both on the guitar and piano, before transforming back into a smooth slide and slam of aggressive dynamism.

Part 3, “Xenosynthesis”, is by the band’s own admission the most black-metal influenced piece of music they’ve ever written, sweeping blizzards of notes, harsh tortured screams, operatic female choirs and crazed dissonance all culminating in a molten, thunderous armageddon constantly on the edge of collapsing into primal chaos. 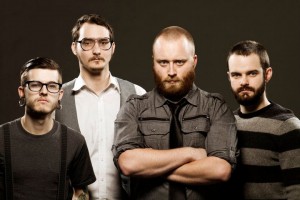 It’s after this that the band’s experimental mien demonstrates two unfortunate, and inter-linked, mis-steps. The first is the placing and pacing of second instrumental “Invisible Creature”, which whilst of passing interest, due primarily to its unconventional tribal rhythms and oriental instrumentation, is simply too short and under-developed to serve as anything other than an (arguably) unnecessary segue into the following song.

The second unfortunate mis-step is found at the end of “Cardiac Rebellion”. No, it’s not the horns and brass, which take a few listens to absorb, but really add a totally unexpected flavour to the track, acting as sharp accents to the riffs beneath underpinning the track. The mis-step is the inclusion of remarkably weak, punky gang-vocals, which seem to lack the energy and conviction usually associated with the band, missing the raw power that Jason Wisdom’s own vocals offer.

Yet apart from this, the majority of the track is extremely interesting and effective, taking the listener on a journey of odd-timed, anxiously constrained riffs and warped, robotic vocals. The initial introduction of the brass elements is a gleeful experiment on the band’s part, calling to mind the joyful experimentation of Arcturus, whilst one must applaud the closing ska-styled section both for its clever execution (the punky, bluesy lead line sits perfectly over the chugging and accents the wild abandonment of the horn section with a more controlled melody line) and for the sheer brass balls it displays!

The album closes on an extremely strong note, with “Reflect/Refract” and “Breathing Light”, both showing the band back on form, naturally incorporating almost all the elements they have used throughout their career into these two powerful mini-epics. 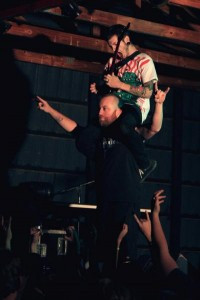 “Reflect/Refract” is the more aggressive of the two, its almost Pantera-inspired groove rounded out by deep, throbbing bass and spiky flurries of lead note explosions. The constant battle between high and low screams gives the song a dirtier edge totally at odds with the sudden and surprising left-turn into acoustic guitar and clean vocals it takes part way through. This, however, exists to provide intriguing contrast to the otherwise incontestable might of the song, particularly after the solo with an elephant-heavy display of crashing drums and continent-tearing vocals whose “break me, remake me” refrain would measure extremely high on the richter scale.

“Breathing Light” is a far more expansive affair, the intro a fitting tribute to the much missed Extol, which quickly morphs into a spiky, groove-heavy melodeath riff-o-rama. The futuristic sheen of Scar Symmetry is evoked by the elegant, agile guitar playing, but given a totally different flavour by the confident and furious gang-vocals which work a treat in this song. Truly audacious lead guitar work provides the crowning glory to the song’s more direct core, while the return of the transcendent and delicate vocal refrain of the intro ends the song in brilliant, sophisticated style. Truly beautiful.

Summary: The album as a whole has a very Norwegian feel to it. The ghost of the much missed Extol hangs heavy in the air, as does a very Borknagar-ian feel to the whole affair. Thematically, it seems more focussed on the themes of light and transformation, with an ethereal, organic feel to the whole work that sits as a counter-point to the themes of soul vs body, man vs machine found on the band’s last album, Dichotomy.