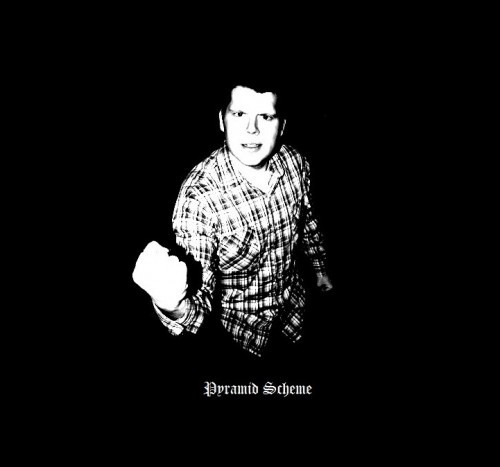 The Brown Book is a band we discovered in March 2010. Back then, they had an album to their credit called Thirty-Nothing, and we frothed at the mouth about it in a review and interview we posted here. Fast forward slightly more than one year, and here we have a new EP from The Brown Book called Pyramid Scheme. The band also now has available a Bandcamp page (here) where you can get a digital download of The Pyramid Scheme with a “name your price” option, as well as Thirty-Nothing for $4.

Now that we’ve got those logistical details out of the way, here’s why you should care about the new EP: Because it sounds like your life, though possibly with more distortion. There are times when you feel balanced, in sync with what’s happening around you, in control of your destiny. But you soon realize that feeling is fleeting, when all hell breaks lose, when you feel pulled in a dozen different directions at once, when the ground gives way beneath you, when an impersonal universe comes crashing down on your best-laid plans and all you can do is ride with it and do your best to enjoy the utter unpredictability of existence.

Or perhaps your life is more charmed and orderly than most, in which case you may need to better appreciate the freedom and sense of abandon that chaos brings. Either way, as a soundtrack to how you live or as a crushing departure from the ordinary, Pyramid Scheme is worth hearing.  (more after the jump, including a taste of the music . . .) 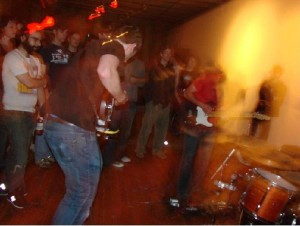 The Brown Book is now a geographically dispersed foursome: Mike Kvidera (Brooklyn) and Jay O’Malley (San Diego) on guitars, Ryan Lavery (Quincy, MA) on drums, and Sam Matson (Cookeville, TN) on bass. Nope, still no vocalist, and honestly, we can’t imagine how vocals could possibly be integrated with The Brown Book’s music.

The songs are unpredictable, the rhythms unreliable. The drums pound and clatter and crash in a frenzy, veering from one rhythmic pattern to another, and then just trashing all patterns. The bass is quite audible — it groans and pulses, and goes off on its own way, an anchor that is often no real anchor at all as it works in counterpoint to the guitars. And oh, the guitars! Heavy on the distortion, they groan, they whine, they shriek, they squall, they pick out sequences of chord progressions that sometimes verge on the melodic (but not for long) or inflict random dissonant notes or simply engage in prolonged bouts of feedback.

There is method to the seeming madness. Within each song you’ll hear repeating riffs or arpeggios, just long enough to get your head bobbing, to get you beginning to feel comfortable that, lo and behold, there is some structure here — and then the ground shifts underneath and the song erupts in grindcore mayhem. There are structures, yes, but no foundation you can count on, and so they collapse and then re-emerge in new shapes.

What we learned from the band’s first album is confirmed by this EP: The Brown Book isn’t interested in playing it safe, or in playing to the crowd. They make vigorous noise, heavy as fuck, intricate, often chaotic, but powerfully evocative and never less than interesting. Four songs, about 13 1/2 minutes total. They flow into each other, really like a single long song. They’ll either hook you good and reel you in — you’ll be running that music on a continuous loop because one or two listens isn’t enough — or you’ll be running for the exits. We’re in the hooked and looping group.

Pyramid Scheme was recorded and mixed at Machines With Magnets by Seth Manchester and Keith Souza and was mastered by the deft hand of Alan Douches at West West Side Music. Perhaps because of all those talented pro’s at the helm, the music doesn’t sound overproduced. It’s blurred, distortion-heavy, raw, and raucous. All sharp edges have been ground down, and all the explosive power preserved. The production suits the music to a tee.

Here’s one of our favorite tracks from Pyramid Scheme:

The Brown Book: Comb Over

For more info about The Brown Book, visit their official site (here) or their Facebook page (here). It appears the band has booked a summer tour with a band called Hellbender. Here’s the schedule as it stands so far: