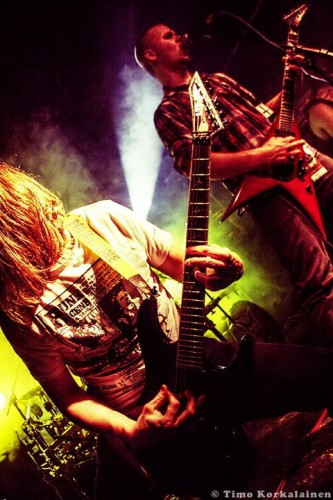 Our focus today is on an unsigned Finnish band named Bill Skins Fifth, whose debut EP caught our attention late last year, and who have just released a new one that’s outstanding. For a band that’s only two EPs into their recording career, they’re way up the learning curve and making a very strong statement that they’re a band to watch.

Bill Skins Fifth (whose name will be recognized by sharp-eyed fans of the movie Silence of the Lambs) was formed in Salo, Finland, in 2008 and in 2010 they released their first work, a four-song EP called Act One. We featured that EP in a post last December as part of our Finland Tribute Week (here), and what we said then bears repeating: “They’re technically capable and they have that special talent that separates bands who have a future from those who don’t: They know how to write songs. To be more precise, they create music that has distinctive melodies and a recognizable structure. They establish themes, they explore variations on those themes, and they return to those introductory themes again.”

Yesterday, the band self-released their second EP, From What Lies Beneath — five songs with a total run-time of just over 19 minutes. It accomplishes what you like to hear from a new band whose music you like: It shows progress. Don’t get me wrong — Act One was damned good — but the new EP shows increasing sophistication in the songwriting and increasing assurance in the execution. (more after the jump, including a link for download of the new EP . . .) 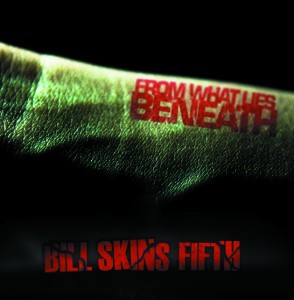 As before, the name of the game is up-tempo melodic death metal. The songs feature a barrage of head-jolting riffs, anchored by a pneumatic bass-line and drum progressions and fills that continue to provide tailor-made support to what else is happening in the songs (though to our ears, the drumming has become sharper and more varied than what we heard on Act One). But what really makes these songs worth hearing are the catchy choruses and the beautiful interplay of the lead and rhythm guitars.

Henrik Hömppi and Aamos Ylönen know what the fuck they’re doing. Between them, they charge the songs with a variety of galloping, Gothenburg-style melodic riffs, and they’re capable of producing some serious flash in their playing, but it’s not overdone, or done at the wrong times. The songs tend to build in guitar-driven intensity (and sonic density) as they progress, and they positively take flight when the guitar solos make their appearance. I found myself waiting for those solos in each song because they’re so damned good, and they feel like organic parts of the music rather than something stuck-on, as if part of a formula.

With the new EP, Henrik Hömppi’s vocals have also become even more impressive. In part, that’s because they’re more forward in the mix on this outing; on Act One, they were sometimes overwhelmed by the instruments. But in part, it’s because he just sounds more adept. The vocals are harsh all the time, but there’s good variety in the range, and they sound authentic and full of emotion. They effectively carry the melodic, catchy-as-hell choruses without ever veering into clean territory.

For fans of melodic death in the vein of Dark Tranquillity or (on this side of the Atlantic) Darkest Hour, this EP ought to put a big fuckin’ smile on your face, and anyone who appreciates thrash-paced, melodic metal with an extreme edge should give the album a full test-drive. Here’s a taste:

You can order a CD directly from the band by sending an e-mail to: contact@billskinsfifth.com

You can also stream and download all five songs from the new EP, plus the songs from the band’s previous Act One release, by using this link. When you get to that page, to download any of the songs, right-click on the “Lataa MP3” option within each music player and select “download” or “save” from the drop-down menu.

And if you want to keep track of what Bill Skins Fifth is up to, here is the link for their Facebook page.

UPDATE: With the band’s permission, we’re now providing a link here at NCS that will allow you to download the entire EP, plus lyrics, the digital album cover and logos, and promo shots of the band, in a single .zip file. Just right-click on the link below and you can save the compressed file to your computer’s hard drive and open it from there.

Bill Skins Fifth: From What Lies Beneath EP

19 Responses to “BILL SKINS FIFTH: “FROM WHAT LIES BENEATH””