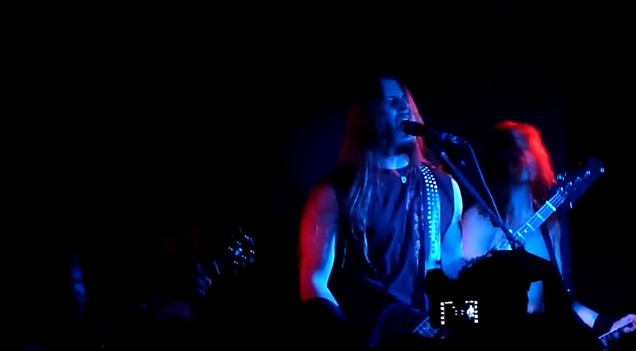 (Our regular contributor Andy Synn, who has a penchant for making us jealous by attending European shows that aren’t available in the U.S., attended the April 22 performance of Enslaved and Negură Bunget in London a few days ago, and checks in with this concert review.)

A beautifully warm and sunny day provided the perfect chance to travel down to London to see some of black metal’s most forward thinking acts play a sold-out show to a rabid fan-base. The clear blue skies and crystalline rays of sunlight acted as the perfect set-up for the evening’s display of shining, progressive musical expression.

After a few beers in The World’s End, my companion and I attempted to join the queue for entry, only to baulk at its length and quickly scurry back to the bar for another few. Any excuse…

We eventually got into the venue shortly after Negură Bunget‘s set had already commenced, and thankfully the band had been given a lengthy 40-minute opening slot, so we were still lucky enough to catch the majority of their set.

With a primal and expressive sound, Negură Bunget provided a set of deep shadows and brilliant, shining highlights, which replaces black metal’s traditionally icy fury with a warm, organic exploration of mood and atmosphere, light and shade.  (more after the jump, including video of this show . . .) 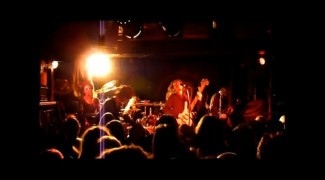 A slightly odd mix robbed the songs of some of their power, both the guitars and bass being particularly muted, although thankfully the vocals, keys and drums retained their potency. Thankfully however, the guitars in Negură Bunget are less about providing overt (and perhaps clichéd) metallic power, but rather a sense of reverent nobility which serves mainly to enhance the morose folk melodies, ethereal keys and anguished vocals which characterise the band’s singular take on the black metal template.

The band make use of a myriad of extraneous instrumentation on record, some of which is replicated live directly, the rest provided by the multi-variate use of of prominent keyboard parts. The drums pound out tribal rhythms with ritualistic fervour, their intricate playing matching pummeling power with admirable restraint, serving each song to its best effect as the band boldly push the boundaries of atmospheric black metal.

Their set eventually draws to a close all too soon, the band accepting the applause and accolades of the audience with a shy, almost reticent demeanour, having delivered a refined and lachrymose display of cultural expression and artistic poise.

After barely enough time to grab a fresh beer from the bar, the lights dim once more for tonight’s much anticipated headline act.

Coming on to the slow-build intro of “Axioma”, the band plunge full-tilt into the epic, icy and sun-drenched gallop of “Ethica Odini”. The rise and fall of stunning riffs and impressive vocal arrangements make the song a perfect opener, mixing perfectly played metallic power with an unmistakable current of bombastic melody.

Only a short pause allows a breather before “Raidho” continues this dichotomous onslaught of overpowering riffs and soothing melodic digressions, both guitarists nimbly picking out suggestive and evocative lead patterns while bass lines throb and purr and fingers dance upon keys with reckless abandon. 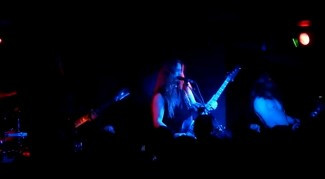 Grutle Kjellson once more proves himself a charming and affable front-man, conversing with the adoring fans with a confident ease, whether thanking the London fans for providing the band with a second home away from home, or affectionately poking fun at US death metal bands and their insecurities (“This next song is called – The Second Coming of BLEURGHFNGHMARGHHH!!!”). His vicious growl is menacing enough to cause local livestock to miscarry, yet he also possesses a particularly effective, yet extremely understated, clean croon of his own, which he employs subtly and carefully to support his more flamboyant co-vocalist during the multiplicity of soaring vocal refrains delivered effortlessly throughout the evening.

While the new material shines as perhaps the finest of the band’s career thus far, it is still a real pleasure to hear “Fusion Of Sense And Earth” live, in all its grand, glacial majesty, its thrusting, stabbing guitars crackling with restrained power and venom. Following this, “Ground” (in my opinion THE stand-out track from Vertebrae) is all echoing cosmic themes and pulsing keyboards, slower and more regal in its live incarnation than on record. A multi-layered delight.

Posing machine (and Norwegian reincarnation of Jim Morrison), Ice Dale spends the set shirtless and shameless, pulling as many guitar god poses as humanly possible without ever missing a note. His fluid and intriguing soloing style adds flair and character with every opportunity he is given to display his singular talent and individualistic approach to guitar playing.

The mammoth “Giants” has echoes of death metal to it, with a lurching, staggering groove that comes across even more powerfully live, its violent metallic clamour giving crushing intensity to the middle part of Enslaved’s set, while “Lightening” offers clear contrast with its perfectly placed progressive meanderings and melodic counterpoints. The stunning clean vocals of Herbrand Larsen take centre-stage on this song, juxtaposed against Grutle’s familiar growling delivery and the song’s gleaming Pink Floyd-ian melodies.

A pleasant surprise is the inclusion of “Allfaðr Oðinn”, the band dipping all the way back to their first EP to treat the crowd to something a little bit special. It’s also rewarding to see how much the band have grown since the early days, whilst at the same time proving a real pleasure to see that the seeds of their expansive future were sown long ago, merely lying dormant for years until finally bursting through in an explosion of new life and new sounds. Thus the common thread between Enslaved’s early years and set-closer “Isa” is all the more apparent, the pairing of the two songs showing the band’s growth and appreciation of their roots. The song “Isa” itself is a perfect closer, infectious (and evil) riffage and harsh blackened screams emphasising the muscular core of the band’s sound.

After a short break, during which the crowd were unwavering in their insistence on a return to the stage, a smiling Enslaved calmly made their way back out to the stage and plunged straight into “Ruun”, brutal yet intelligent guitars packing an almost unlimited array of interesting and complex riffs into the song’s progressive structuring while under-appreciated drummer Cato Bekkevold controls the speed and intensity of the song like a masterful conductor.

Concluding with  “Slaget I Skogen Bortenfor”, the band once more return to their roots, yet manage to give the song a freshness which fits perfectly with their latter-day stylings, the two vocalists effortlessly trading parts and supporting one another as the song progresses through an epic saga of rolling rhythms and sharp-edged guitars. Bolstered by the addition of expanded keyboard parts and subtle vocal inflections, the song shows just how far the band have come in their many years together and provides a fitting and memorable send-off to the evening.

3 Responses to “ENSLAVED AND NEGURĂ BUNGET AT THE UNDERWORLD, LONDON – APRIL 22ND”