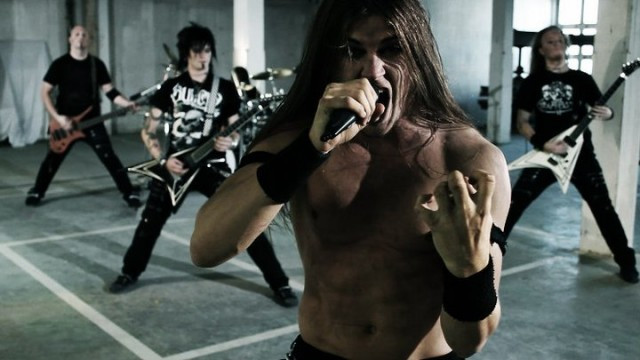 Deals Death is a melodic death-metal band from — where else — Gothenburg, Sweden. I first heard about them last September when Death Metal Baboon posted a track called “Fortified”, which Deals Death had recorded in 2010 as part of an album called Elite (their second full-length). Not long after hearing that song (which I though rocked the fuck out), I saw that the band had decided to scrap all of the recordings for Elite and to have them re-mixed by none other than Jonas Kjellgren of Scar Symmetry.

Deals Death now reports that the re-mix is finished, the album artwork is complete, and they’re “considering different options” for the release of Elite. I would like to suggest, as one option, that they release the album to me so that I can listen to all of it. I think this is an excellent option, because I’ve now heard the re-mixed version of “Fortified” and it’s my kinda thang — thrash-paced melodic death metal with a catchy melody, infectious grooves hammered out by the rhythm instruments, and a vein-bursting screamer.

I’ve heard that remixed song, not because I’m special or anything, but because Deals Death just released a music video for “Fortified”. It’s a professionally filmed video of the band performing the song and looks good. I predict the ladies are going to like shirtless vocalist Olle Ekman. No slight intended to the other dudes in Deals Death, but Olle has clearly been putting in some time at the gym.  Check out the vid after the jump, and get prepared to bang yo fucken head.

For more info, check out the Deals Death Facebook page.