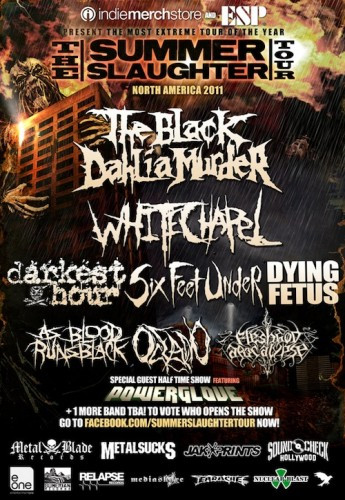 If you live in the U.S., you may remember that the promoters of this year’s SUMMER SLAUGHTER tour conceived a creative piece of marketing by allowing fans to vote from among a list of 11 bands for the last act to fill up the touring line-up. Within the Ruins won that vote and will be joining The Black Dahlia Murder, Whitechapel, Darkest Hour, Six Feet Under, Dying Fetus, As Blood Runs Black, Oceano, and the almighty Fleshgod Apocalypse on SUMMER SLAUGHTER.

Rumors have been circulating that the promoters would organize a second tour featuring bands from the voting list that didn’t get selected via the Facebook ballot-stuffing . . . uh, voting. Well, now that’s been confirmed by the tour promoters. There will indeed be a SLAUGHTER SURVIVORS tour, and this will be the line-up:

The tour will run from late July to late August. The cities and venues haven’t been announced yet, but we’ll get you that info as soon as we have it.

Note that Scale the Summit have been included, even though they weren’t on the voting list. That’s a cool development. Unfortunately, some of the best bands on that voting list who didn’t get selected aren’t included on this SURVIVORS tour, ie, Revocation, Neuraxis, Augury, 7 Horns 7 Eyes, Dawn of Ashes.