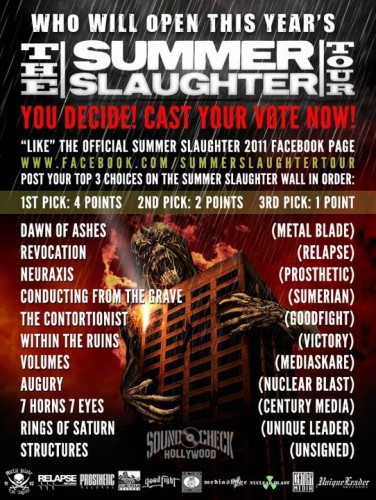 If you live in the U.S., you may remember that the promoters of this year’s SUMMER SLAUGHTER tour conceived a creative piece of marketing by allowing fans to vote from among a list of 11 bands for the last act to fill up the touring line-up. Within the Ruins won that vote and will be joining The Black Dahlia Murder, Whitechapel, Darkest Hour, Six Feet Under, Dying Fetus, As Blood Runs Black, Oceano, and the almighty Fleshgod Apocalypse on SUMMER SLAUGHTER.

Earlier this month, the tour promoters put out the word that they were organizing a second tour featuring some of the bands from the voting list that didn’t get selected via the Facebook ballot-stuffing . . . uh, voting — plus Scale the Summit. Here’s the line-up (which unfortunately doesn’t include some of the best vote-losers — Revocation, Neuraxis, Augury, 7 Horns 7 Eyes, Dawn of Ashes).

As of this morning, we now have the tour schedule. I have mixed feelings about this schedule. On the one hand, I’m happy for all the people in Lubbock and Des Moines who’ll get to see it. On the other hand, they couldn’t be bothered with a single date anywhere in the Pacific Northwest? What are we, chopped liver?  The schedule is after the jump . . .

12 Responses to “SLAUGHTER SURVIVORS TOUR SCHEDULE IS OUT”