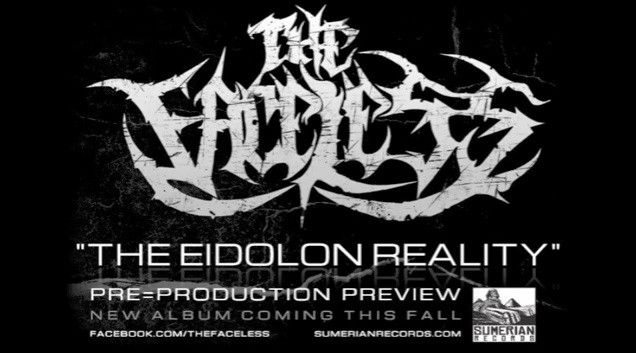 This post is what we consider a “public service announcement”. In other words, we’re informing you of something that we know many of you will be interested in learning — but not because we’re recommending it to you.

Within approximately the last hour, The Faceless posted a “pre-production preview” of a new song called “The Eidolon Reality”, which will appear on the band’s next album, due sometime this fall. This is not the final mastered version of the track. I’m not sure why the band (or Sumerian) decided to release this instead of waiting until completion of mastering, but they did.

Fans of technical death metal have mixed opinions about The Faceless. We here at NCS are fans of technical death metal, and we liked Akeldema and, to a lesser extent, Planetary Duality. But to be honest, this new song made me cringe. Literally. Cringe.  I even have a hard time developing an opinion about the instrumental work and the growly vocals because the song includes some truly bad clean singing. There. I said it. Go past the jump and listen for yourselves.  Be forewarned, I think the YouTube clip is set to begin playing automatically.

Sumerian Records has just posted a second “pre-production” preview of this song.  I’m confused.  Either this is an additional segment of the song, which is longer than I thought it was, or an additional instrumental track has been added to the recording of teh song. It does sound like a second guitar solo is in there. But I haven’t gone back to listen to the first preview track to figure this out for sure. You know why.

Well, as you can see, since our first update earlier this afternoon, the first “pre-production preview” has gone dark, which must mean that the second one was a replacement that included something that the first one lacked — in which case I really don’t understand why Sumerian put up the first “preview” yesterday. On the other hand, no one ever accused me of being a marketing genius.

However, the second preview still includes those vocals . . .

27 Responses to “NEW SONG FROM THE FACELESS (GROAN)”