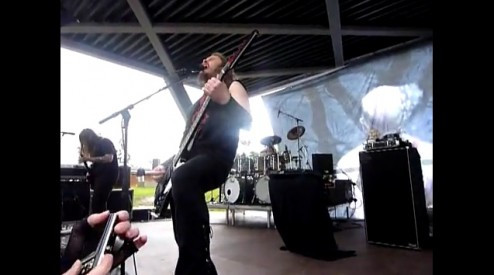 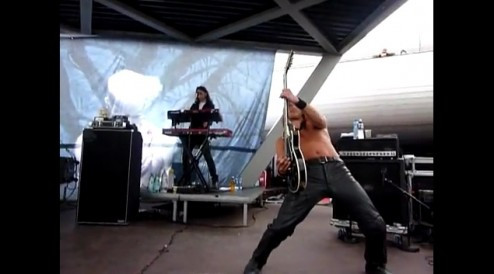 I think Norway’s Enslaved are so talented that they can do anything they set their minds to, and do it superbly. As further proof, I have some videos for you, which, as the kids say, are fuckin’ siiiiiiiick.

Just the day after that Dimmu Borgir show that Andy Synn attended in Oslo on May 28, Enslaved played a special show in the same city at the Henie Onstad Art Centre, which appears to house Norway’s largest collection of international modern art.

In honor of Enslaved’s 20th anniversary, the Art Centre asked Enslaved to prepare a special setlist consisting of a mix of cover songs from their favorite bands as well as original songs. Among the artists Enslaved covered were Pink Floyd, Rush, Faith No More, Led Zeppelin, and King Crimson.

Thank goodness someone filmed this. So far, I’ve seen videos for the band’s performances of “The Immigrant Song” — one of my all-time favorite Zeppelin tunes — and “Red” by King Crimson, plus a drumcam view of the band’s own original song “Lightening”, from Axioma Ethica Odini. The video quality is excellent and the audio quality is pretty good — good enough to blow me away.  (more after the jump, including the videos . . .)

It won’t surprise you to learn that Enslaved didn’t just provide rote repetitions of the songs they covered. What makes their performances of “Immigrant Song” and “Red” so amazing are the variations they worked into the original works (which include some beautiful guitar leads and solos). I dearly hope someone made a pro-quality audio recording of this set, because I would kill for quality digital tracks of this stuff.

OK, maybe not actually kill.  But maim.  I would maim for that.

The drumcam footage provides a drum-heavy sound for “Lightening”, but that really isn’t a bad thing in this instance, because Cato Bækkevold is beastlike in his performance.

22 Responses to “COVERS: THE ENSLAVED EDITION”