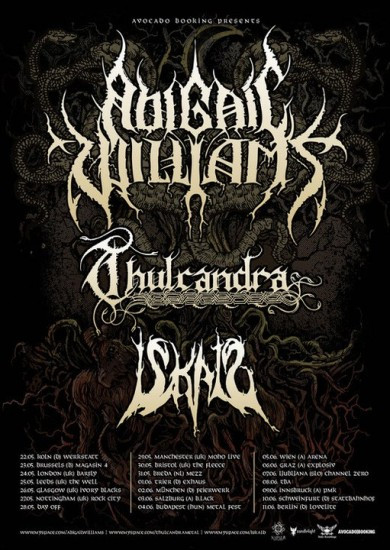 (Andy Synn had a full, black (metal) weekend (except for the fact that he missed Enslaved on Sunday). Before jumping the ocean waters to visit Oslo for that Dimmu concert he wrote about yesterday, he spent a night with Abigail Williams, Thulcandra, and Iskald in England, and has kindly provided us with a report. You should know that he started that night, not in the audience, but on stage roaring with his band Bloodguard.)

On Friday the 27th of May, my band and I were lucky enough to open the show for three extremely talented black metal acts. Though the crowd was small, they were all passionate about their love of the genre and equally appreciative of all the bands’ efforts. Each of the three bands demonstrated a different facet of the black metal template, be it the proggy, thrashy approach favoured by Iskald, the streamlined melodicism of Thulcandra‘s Dissection-worship, or the tense, introverted catharsis of Abigail Williams.

Openers Iskald played a short, tight set, delving into material from all three of their albums.”Under The Black Moon” off their latest (phenomenal) album was a sumptuous delight of crunchy guitars and awkward, obscure rhythms, while “A Breath Of Apocalypse” pummelled and grooved with a refreshing directness and power. Throughout their set, thrash-style speeds and an at-times death metal aesthetic wrapped around soaring, crystal clear melodies, intelligent, driving drums and rough, propulsive Immortal/Enslaved-style riffage.

Sharp and icy, the band delivered time and time again, with each song bearing a different and distinct flavour. Songs like “Domesdag” (introduced as “a true Norwegian song”) and “Det Stilner Til Storm” brought a fiery passion to match the cold melancholy of their icy melodies, their moody, progressive diversions and impressive, yet restrained, technicality demonstrating exactly why Iskald deserve to be held amongst the elite of modern-day black metal. In particular, their most recent material demonstrates more growth and ambition than most latter-day members of the black fraternity can muster, unafraid to explore different textures and impressive, forward-thinking structures. (more after the jump . . .) 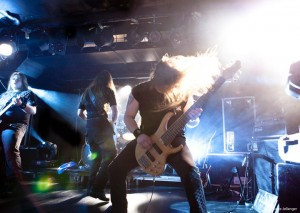 A morose and brooding atmosphere dominated, often at odds with the band’s crushing, energetic performance, Simon Larsen in particular playing as if his life depended upon it, all the while encouraging the crowd to bang their heads and raise their fists in time with the blood-pounding rhythmic battery provided by his cohort Aage Andre Krekling. The raging vocals added real depth and emotional force to the performance, a mix of grating black metal rasps and harsh gutturals delivered with honesty and believable force. Closing with the bleeding darkness of “The Shadowland”, Iskald left the stage to a massive roar of acclimation, fully validating their impressive, ambitious performance. 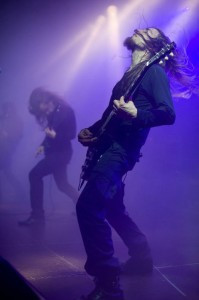 One could well describe their performance as cheerful, with the smiling face and cheery banter of singer/guitarist (and band main-man) Steffan Kummerer, whose virtuoso playing and posing stood in sharp contrast to the more reserved demeanour of his band-mates. Guitar held high, he lived out the majority of his Jon Nödtveidt fantasies, barking and howling his darkly romantic lyrics over some suitably spiky riffs and an impressive, yet never attention-diverting, performance by Dark Fortress drummer Seraph who dominated his kit with restrained power.

“Fallen Angel’s Dominion” was a definite highlight of the set, flawlessly performed with both style and conviction. However, repeated calls for “The Somberlain” from the audience, combined with an overall sense of the band relying solely and heavily on one core influence, meant that the material rarely rose above the level of a talented (and honest) tribute to Dissection. Despite the talented performance and tight playing, the set as a whole never really managed to escape the shadow of its primary influence.

Closing with “Spirit Of The Night”, the band offered effusive thanks for their warm welcome to Nottingham, promising to return with a newer, more wide-ranging wealth of material in the future after the completion of their new record, Under A Frozen Sun, which, after the airing of even one sole new song this evening, promises to be a more ambitious, heavier effort with a more distinctive sense of identity. 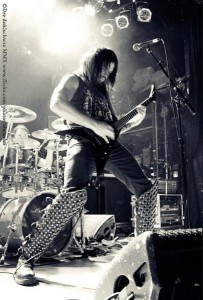 Abigail Williams proved themselves deserving headliners, despite the poor turnout, with an intense set of articulate, blackened fury, drawn primarily from their latest album In The Absence Of Light. In an effort, conscious or unconscious, to prove their particular mettle, the band delved deep into themselves to conjure up and exorcise their own internal demons in front of a baying crowd of devotees.

With a set that focussed less on extrovert performance theatrics and more on introverted catharsis, the group tore into their instruments with a vengeance, eking out as much primal feeling from their strings as humanly possible. Both Ken Sorceron and Ian Jekelis ripped and shredded at their guitars, balancing cold, inhuman savagery with stark, vibrant leads and droning, depressive atmospherics, while drummer Ken Bedene was an utter phenomenon behind the kit, his relentless speed and technicality adding an excess of flair and panache to the band’s material, while his unerring skills and seemingly inexhaustible stamina enabled them to maintain a stunning pace of delivery. The energetic display of bassist Gryph Wotawa, whose nimble fingers added subtle flavours and nuances to the rusted riffs and blast-furnace drumming throughout, also provided a fire-brand presence to the stage, his talented bass playing not preventing him from thrashing.

Opening with (arguably) the weakest song off their most recent album, “Hope, The Great Betrayal”, the four-piece threw themselves wholeheartedly into the music, the set building and improving in intensity as it went on. The restrained imperial melodies of songs like “Final Destiny Of The Gods” – with its infectious opening lead and chunky stabs of concrete-heavy riffage – and “In Death Comes The Great Silence” – with its tormented “I am abomination” vocal refrain – merely served to add to the sense of soul-destroying, existential despair conjured by the music.

These lengthier numbers demanded full attention and devotion from the audience, twisted slabs of atonal guitars morphing through numerous abstract shapes and structures, while the more violent cathartic explosions of shorter numbers like “Infernal Divide” provided a paint-stripping storm of blackened brutality and sharp-edged dynamics. The bleak melody and venomous vocals of “What Hells Await Me” in particular recalled prime “Stormblast”-era Dimmu Borgir, stripped of all the theatrics and grandiose embellishments, leaving only the tortured core of spiralling guitars and apocalyptic drums. 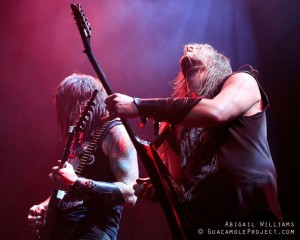 Ken Sorceron’s god-forsaken howl was on fine form throughout, snarling his demonic philosophies with compelling clarity and mesmerising force, and the subtle keyboard embellishments which permeated the songs worked perfectly to add complex textures and an otherworldly vibe to the proceedings. Older material off In The Shadow Of A Thousand Sons was different, but not totally removed, from their newer works, showcasing more overt layers of melody and technicality. Songs such as “The World Beyond” and “Floods” balanced speed and power with cold, cruel melody and a ferocious, barbaric guitar tone, ably supported by prominent keyboard breaks which served to accent the devilish tightness of the band as a whole.

Close to the end of the set, Ian Jekelis broke a string, forcing him to abandon the stage temporarily. Yet the remaining three members soldiered on without missing a beat, upping the intensity of their performance to compensate for his absence. His welcome return allowed the band to finish with a stunning rendition of “The Departure”, whose ebb and flow of light and shade ended the night on a high note of frenzied drum work and spiteful guitars.

More than ever, Abigail Williams appear to be positioning themselves as a leading force in the American black metal underground through their sheer bloody-minded perseverance and almost unrivalled technical abilities. Though their convoluted history may mean they never get the underground respect they truly deserve, this seems to matter little to the members of the group themselves, who are less interested in underground accolades and instead more intent on forging their own path through the misty undergrowth of American black metal, leading by example, rather than reputation.

EDITOR’S NOTE: The tour that Andy saw, and opened for in Nottingham with Bloodguard, is still in motion at this writing. If you live in Europe, this sounds like something very much worth seeing. Here are the remaining dates and places: