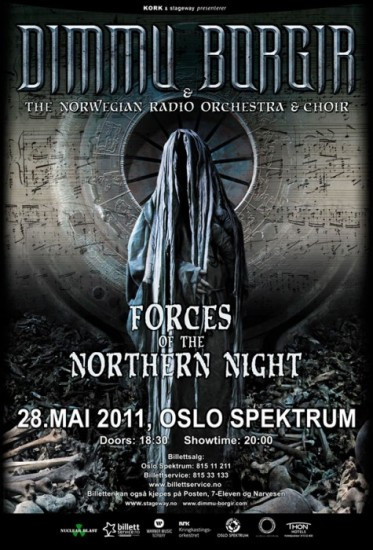 (Andy Synn was present for a landmark event in Oslo on May 28 — an exclusive show by Dimmu Borgir with a special, “never-to-be-repeated” setlist with 53 members of KORK (the Norwegian Radio Orchestra) and 30 members of the Schola Cantorum choir, who were musical guests on Abrahadabra. This was Dimmu’s only confirmed worldwide appearance for this summer. We’ve got Andy’s evocative review of the show plus video footage and some excellent photos taken by Per Ole Hagen for the NRK blog.)

I have seen Dimmu Borgir live several times before now, and each experience has been different. Sometimes the show has been great, the band’s enthusiasm and drive adding a different live element which balanced out the obvious limitations of performing such grandiose, symphonic material in the limitations of a live metal show. At others, certain issues seemed insurmountable, even the band’s powerful performance and conviction in their material not serving to elevate the show above “average”. Worse still are the times I have seen the band when internal issues were weakening them massively, meaning that drive and conviction was lost, resulting in a lacklustre performance.

Yet at Saturday’s show I felt like I was finally seeing Dimmu Borgir in the way I was always meant to. The mood, setting and structure of the show all captured the vision and atmosphere of the music perfectly. The fusion of traditional classical elements, with their scintillating, naturalistic scope of sound and the more aggressive, vibrant metallic furore of Dimmu’s particular style of “black metal” was a perfect synthesis of style and substance, sound and fury, which hammered home the clear links between classically influenced metal composition and the true traditional classical elements. (more after the jump . . .) 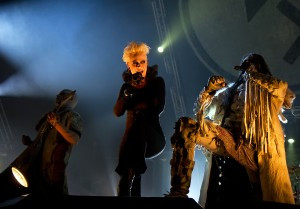 There was a seductive glamour about the whole show, the stunning stage set, moody lights and huge, impressive sound all helping to give life to the majestic grandeur which this particular type of “black metal” embodies. I continue to attest that there are many, different variations on the black metal template, each representing the many faces of evil as a philosophical ideology; the thrashier, more violent variations, the crusty, punky versions, the expressive, bleak droning types, all of these have their place. In this spirit I would contend that Dimmu Borgir have their own fully justified place in the pantheon of “black metal”, playing the role of Satan as the great seducer, the heroic evil of Milton’s Paradise Lost, tempter and beguiler of the thoughtless good.

With the 53 members of the Norwegian Radio Orchestra and their conductor situated at one side of the stage, and the 30 black robed members of the Schola Cantorum Choir on the other. the centre of the huge stage was dominated by a prodigious drum and keyboard riser and huge, menacing backdrop. In addition to this, three curtains, one for left, one for right and one huge one for the larger central area, initially separated the stage from the rabid audience, each bearing the band’s trademark bleak yet beautiful artwork. These would rise and fall as the evening’s progression dictated, sometimes revealing only the orchestra and choir as they teased out shimmering strains of classical music between the full collaborative songs. 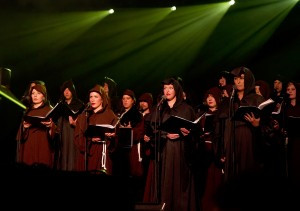 The night began with the choir and orchestra building the ominous intro track “Xibir” from behind the curtains, its forbidding progression building slowly but surely to the point where the curtains drew back, revealing the band clad in shining white robes of enigmatic ritual, as they dove into the rolling, lurching aggression of “Born Treacherous”. An initially subdued guitar tone was quickly rectified, adding a crushing heaviness to the crunchy, staccato riffs and creeping chord progressions, while drummer Daray demonstrated that his reputation as a monster behind the kit is fully justified.

The sweeping symphonic measures of “Gateways” perfectly contrasted the winding tremolo melodies and sharp drumming assault which underpinned the track, while the band also brought out Agnete Kjolsrud to reprise her guest vocals, her distinctive tones adding to the dark beauty of the song as she performed an alluring dance of give and take with Shagrath’s own enigmatic vocal delivery.

The band left the stage at this point, to shed much of their bulky stage wear, allowing the choir and orchestra to deliver their own fully symphonic version of “Dimmu Borgir” in the interlude, before the band members returned to the stage one by one for a full-on performance of the eponymous self-titled track. Part cathartic musical experience, part political rally and part vaudevillian theatre, it cemented the perception that the show was more than just a normal occurrence, but a truly special occasion, both the band and orchestra going all out performance-wise to achieve an exalted level of musical transcendence. 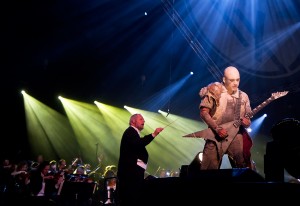 It was a true wonder to watch so many classically trained musicians attack their instruments with such vigour, driven by desire and the sublime power of the material, and their efforts were rewarded by a rapturous crowd response and an even more fiery performance by the metal musicians with whom they were collaborating. A master ring-leader, Shagrath had the rabid crowd in the palm of his hand throughout the track, and throughout the show as a whole. Yet nowhere was this more apparent than when he delivered the opening lines “Forces Of the Northern night…”, only to be met by a huge roar of “assemble” from the gathered devotees. I’m not ashamed to admit that my own voice and fist were raised triumphantly along with the rest, as the crowd became a single, monstrous creature united by a singular purpose and desire.

While accusations of camp could be easy to throw at the performance, it was the band’s full commitment and conviction which put the lie to these detractors. There was no superficiality, no knowing irony in the performance of these songs, the band committing fully to their vast, over-blown and often knowingly pompous musical vision. There was no embracing of limitations, no less-is-more attitude, no compromise made in the creation of this monolithic performance. 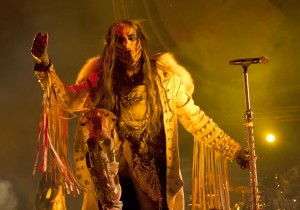 Songs like “Chess With The Abyss” and “Ritualist” off their latest album came to full, glowing life in the live setting, played with manic energy and intensity by all the performers, in particular in the manner in which the huge vocals of the choir completely supplanted the clean vocal sections of Snowy Shaw from the album versions of certain songs. Shagrath’s vocals were also delivered with more fire and confidence than I have seen before, his signature snarl and booming growl dictating the responses of the hypnotised group gathered before him, each willing and able to enact his every whim and desire.

The orchestra and choir once again took (metaphorical) centre stage for a rousing rendition of the orchestral run-through of “Eradication Instincts Defined”:

: before Shagrath used his vampiric snarl to introduce a devastating, merciless performance of the thrashy, aggressive “Vredesbyrd”, watched over by the the unwavering gaze of the band’s Lovecraftian icon. Much credit must go to session bassist Cyrus, his performing and playing style added an extra edge of punchy violence to the song as he stomped and swaggered about the stage, locking in tightly with the ferocious blasting of Daray and the razor-keen playing of Galder and Silenoz.

Anthem for the end of days, “Progenies Of The Great Apocalypse”, elicited a dramatic response from the assembled masses, the 8000-strong crowd roaring their approval in the voices of the possessed and damned. The song’s beauty-and-the-beast arrangement truly transcends my ability to describe fully, as its elegant concoction of war-like brass, sweet, mellifluous string arrangements and punishing power left myself and the rest of the enraptured audience truly spellbound. A herculean effort by the choir put to shame any thoughts that the band would be lessened without Vortex’s participation, each member working in perfect harmony (no pun intended) to build a huge wall of voices.

“The Serpentine Offering” off the rather lumpen In Sorte Diaboli was given a new form of unholy life with the increased orchestral presence, in particular the choral vocal section that replaced the clean vocals of the studio version, and was a surprising hit with the live audience.

A short interlude followed where the orchestra delivered a sumptuous, regal version of “Fear And Wonder”, leading into a blistering high-speed performance of “Kings Of The Carnival Creation”:

: and a crushing version of fan-favourite “Puritania”. Interestingly, the orchestral embellishments of these tracks did not seem to fit quite as naturally as on the other tracks played thus far, which all seemed far more naturally composed with full orchestration in mind – something which the material from Puritanical Euphoric Misanthropia, the first of their albums to feature full orchestral accompaniment, reflected only in a more limited manner. 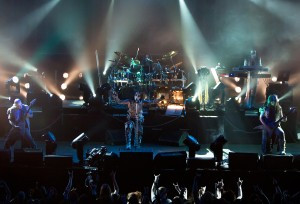 The night concluded with a colossal rendition of spiky, satanic classic “Mourning Palace”, which, against all expectations, synchronised seamlessly with the increased orchestral and choral presence, making the song into an entirely new and entirely more ferocious beast. Spiky and ragged, yet streamlined and vicious, the track encapsulated the past and present eras of Dimmu Borgir, showcasing how the deep-seated drive has always been there to create such complex, symphonic epics, though only recently have the band been able to fully realise their lofty ambitions of mixing magnificent, orchestral grandeur and storming metallic fury. The transformation of the song with the addition of the modern symphony elements made it blend seamlessly with their more recent material and provided a fitting ending to a phenomenal evening of blackened, epic majesty.

Winding down the evening, the orchestra remained to perform a beautiful rendition of “Perfection or Vanity”, before the band made several successive returns to the stage to thank the crowd, the orchestra, conductor, choir and assistant organisers and composers for their part in creating this singular, stunning spectacle.

One of the best live experiences of my life, bar none.

Two more of Per Ole Hagen‘s wonderful photos follow below, and more can be seen here. Equally luscious photos of the show by Kim Erlandsen are available at this location. 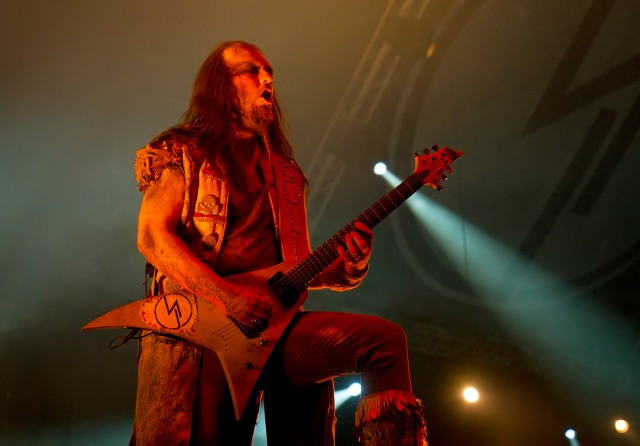 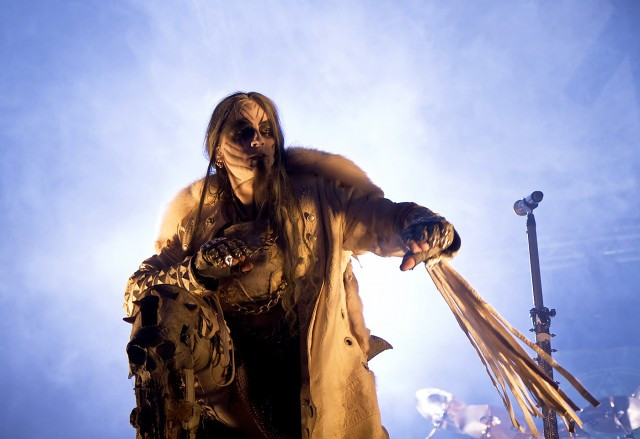