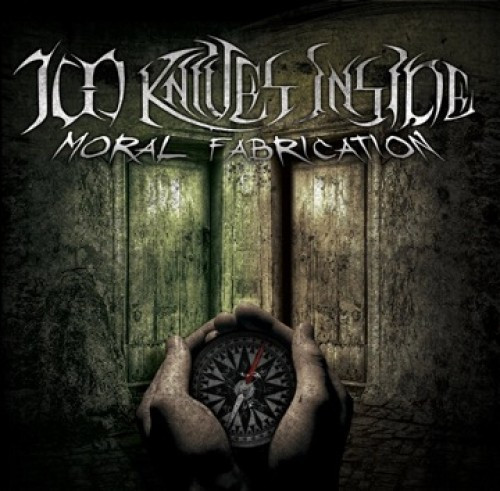 (Last time out, Israel Flanders introduced us to a real winner in Moscow’s Kartikeya. Let’s see what Israel has got for us today . . .)

I hate deathcore.  Like, really hate it.  I think it’s for the most part garbage, useless — anything you could come up with as an insult, I’d apply it to this genre.  However, there are bands out there who’ve proven me wrong, such as Carnifex with their last album Hell Chose Me.  It has been a long time since I’ve heard any worthwhile deathcore — until I ran across this…

So, that was the single from the upcoming, untitled full length by a band called 100 Knives Inside.  We’re not here to talk about that today though.  Instead, I am reviewing this band’s debut EP from last year, Moral Fabrication.

100 Knives Inside is a technical djeathcore (hehe, see what I did there?) band from Denmark, of all places.  Denmark has an unfairly overlooked music scene to begin with, producing such great bands as Mercenary, Hatesphere, Invocator, and Mnemic, to name a few, as well as a band whose music I previously reviewed on this site called The Interbeing.

So why all the fuss I’m making here?  This is very technically sound, brutal deathcore with a huge dose of djent to keep it refreshing, with a healthy side of shred involved.  These guys don’t play around, whether it be their dissonant, noodily tech-riffing, djenting polyrhythmic grooves, or throwing down to a bare-bones breakdown or fast death-metal riff.

The vocals are standard fare, but nonetheless very effective.  The drumming is inhumanly tight and precise in the way that you’d expect from a band playing music this elaborate.  The riffs from both the guitarists and bassist, as well as the bassist’s occasional moments of shred, and the dark melodic nature of the shreddy solo’s on this album provide a really good combination of elements.  The way this band can transition from a blast-beat fest into a djenty groove riff is pretty phenomenal, although I can imagine some people will feel that it sounds a tad disorganized.

Check out the songs below to see what you think. I think these guys are on the path to doing very well for themselves.

To discover more about 100 Knives Inside, their MySace page is here, their Facebook is here, and their EP is on sale at iTunes and also here.

7 Responses to “100 KNIVES INSIDE: “MORAL FABRICATION””