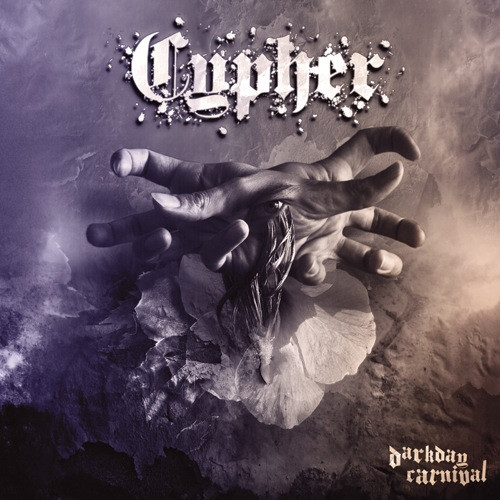 Cypher plays VERY aggressive melothrash that doesn’t let up, and the band’s debut and only album Darkday Carnival, released in 2006, lives up to this style to a T. Drums are pounding out thrash beats with savage force, guitars and bass are pedal-point riffing with tight precision, and the vocals are just ferocious in a way that’s out of this world. (more after the jump . . .) 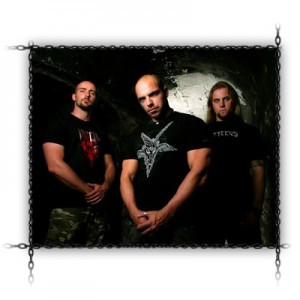 The thing that really sets apart Cypher is the fact that they don’t (most of the time) stick with basic time signatures. They employ a 6/4 beat or 7/4 beat CONSTANTLY, giving the riffs an almost revolving-door-like feel. They don’t have a beginning or an end, they just kind of bleed over into the next riff. It’s an interesting effect, to say the least, but it also gives them a ton of power, allowing them to create some truly interesting riffs. The intro/chorus riff to “Forward Devolution” or the entirety of the song “Statues Of Flesh” are examples of this technique. There is a very original vibe because of this. Cypher has riffs that sound unique because this feel allows them to be played with. You could imagine these riffs in a standard time signature context, but they’d have less to them and thus could become boring.

This album doesn’t have a fancy or ominous intro like many modern metal albums either. It just gets going straight away when the ferocious opener “Fortune My Foe” awakens from its slumber with its attention-perking opening riff. And that opening signals the energy that follows. If you like headbanging, this album is for you. If you like brutality in a melodic context, this album is for you. One thing you will notice is that except for only ONE SONG, this band does not use solo’s. It’s just good riffs, one after the other, being thrown at you without mercy.

I have a hard time describing the sound of Cypher, to be quite honest, except that I can tell you it’s a combination of the style on Trivium’s Shogun and Swedish melothrashers Darkane. I’ve included this album for download at the end of this post. I hope you’ll enjoy it as much as I have.

Now as for this band disappearing… it really is just that. They released this album, gained a HUGE following on MySpace, were preparing a new album that was to be called Tyrian MMVIII that, quite frankly, could’ve been the best melodeath record released in the last 10 years — I shit you not.

Then all activity just… stopped. They stopped logging onto MySpace, everything went silent. No break-up message, nothing. It’s only just now that I find their MySpace has been logged onto for the first time in A YEAR! Maybe this means Tyrian MMVIII will see the light of day after all. Why is this such a big deal to me? Well… go to their MySpace and you’ll get it. The three songs you’ll find there are from what was supposed to be this album.

I hope you enjoy Darkday Carnival, because, as totally obscure as it may now be, I love it to death.

And here’s that promised link for a download of Darkday Carnival:

EDITOR’S NOTE: After Israel put this review to bed, he struck up an online conversation with the mastermind behind Cypher, Tobias Borra, who confirmed what many may have suspected — that Cypher is no more. However, a new band is rising from those ashes. Tobias has been joined by Joost van der Graaf (bass, also from Cypher) and Koen Herfst (drums) in the successor to Cypher. The new band is working on an album that will, with good fortune, see release before this year is over.

As for Tyrian MMVIII, Tobias explained to Israel that it was intended as a 3-song promo for a new Cypher album, and therefore may never see release. But Tobias has provided us a copy, and so we’re going to provide a download link for it as well. NCS thanks Tobias for letting us bring this EP to you: