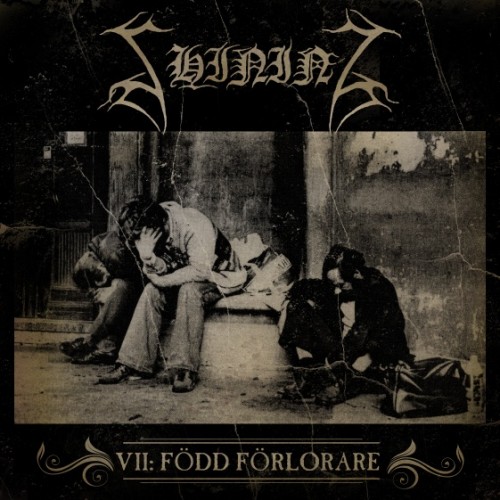 Shining‘s new album, VII / Född Förlorare (“born loser” in English) is one of the most musically varied, beautifully written, and superbly executed albums I’ve heard this year. It also may be the most surprising.

Maybe I wouldn’t have been so surprised if I’d been more familiar with the band’s previous releases, but I came to the album as a Shining newbie, never having heard any of the earlier music. What I had in my head before listening were bits and pieces of things I’d heard or read over the years — that the band played a mix of black metal and doom, that the lyrics promoted suicide and other forms of self-injury (including drug abuse), that the band’s concerts have turned violent on occasion, and that frontman Niklas Kvarforth mutilates himself on stage. There was also this quote from Kvarforth that I read someplace (the original source is here):

“Of course we support suicide, SHINING support all that is negative in this bastard world of ours. We have had a couple of cases in the past with people whom have ended their lives under the influence or partially under the influence of our work and of course this is a true blessing indeed, yet we pray for increased numbers of fatalities.”

With all that, and a general sense I had that Shining really doesn’t care what anyone thinks of them or their music, I’m not completely sure what I was expecting from the new album, but it wasn’t what I got. What I got was something that defies easy characterization, a mixture of folk music, progressive metal, acoustic ballads, chug-heavy aggression, wonderfully varied vocals, and absolutely blistering guitar solos. The music is rich and often has the feel of something intensely personal. Yes, it’s mostly dark and melancholy, but it didn’t make me feel suicidal at all.  (more after the jump . . .) 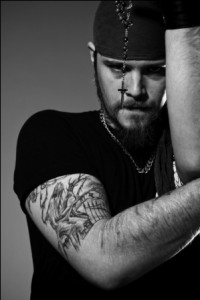 The album, recorded over a three-year period, contains six songs. All the music and lyrics (sung exclusively in Swedish) were written by Niklas Kvarforth. Whatever else you may think of him — and I’m sure he really doesn’t give a fuck — there’s no denying he’s extremely talented. As you’ll see, he also had some valuable help on this album, not only from the other talented musicians in Shining but also from guests.

The album’s opening track, “Förtvivlan, Min Arvedel” (Despair, My Heritage) is the subject of a music video we featured here a couple weeks ago. We were really taken with that song then — it’s what led us to beg for an advance listen to the rest of the album — and it hasn’t lost any of its luster with repeated listening.

Lyrically, it’s about as bleak and hopeless as it could be, but the music is striking. To steal from what I wrote when we featured the video: “It’s almost two songs in one — a galvanizing charge of groove-inscribed black-metal catharsis and a haunting melody carried by acoustic guitar and clean singing. Yet those two creations are twined together, the one flowing seamlessly into the other and back again in a way that makes perfect sense.”

Second song, “Tiden Läker Inga Sår” (Time Heals Nothing), is another study in contrasts that complement each other. The first segment of the song and the last are slow and beautiful, driven by acoustic guitar, flute, and moving, clean vocals (along with a hacking cough). In the middle, the vocals turn harsh and anguished and the music is all metal, with howling guitars and ravaging double bass. Watain‘s Erik Danielsson provides guest vocals on this track.

Unless you speak Swedish, you wouldn’t know that, lyrically, the song is an inducement to suicide — yours.

“Människa O’Avskyvärda Människa” (Man Despicable Man) is the track I’ve come back to the most, because parts of it just set my head on fire — the parts that feature extended guitar solo’s by Arch Enemy‘s Chris Amott and Shining guitarist Peter Huss. They jump forward in the mix and blaze like comets in a night sky; in my humble opinion, you won’t find better on any metal album this year. When those guitars aren’t blazing, the music is a pattern of heavy, chugging riffs and jabbing verse rhythms. But this song, too, has a double nature, with the first guitar solo preceded by a subdued instrumental performed with acoustic guitar, bass, and synthesizer. 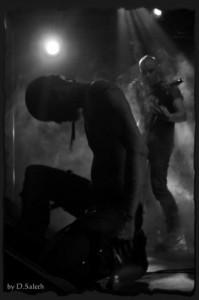 The fourth and fifth songs are really one long song, and the most beautiful work(s) on the album. “Tillsammans Är Vi Allt” (Together We Are All) is itself more than nine minutes in length. A grand piano leads the opening of the song before driving drum-and-bass rhythms and buzzing guitars take over. In the verse, Kvarforth’s anguished howls hold sway, but the remarkably memorable clean-voiced refrain is provided by a Swedish pop star named Nordman. In the middle of the song, the pounding music melts away, replaced by the shimmer of a mellotron (when’s the last time you heard a mellotron on a metal album?) and a reverberating guitar.

The grand piano returns, with string accompaniment, at the end, and the piano melody flows right over without pause into the intro of “I Nattens Timma” (In The Night Hour). This turns out to be a cover of a song by a Swedish prog/art-rock band called Landberk from their 1992 album Riktigt Akta. On this song, the principal instruments are the piano and the mellotron, though there’s also a masterful acoustic guitar solo. The haunting melody is sung with clean voices, including a guest vocal appearance by Peter Bjärgö of Arcana.

The last track, “FFF”, opens with an industrial-style rhythm with a rising bass line and ringing guitars, followed by an acoustic guitar melody with Kvarforth’s clean vocals. But then the song fucking erupts — harsh, agonizing vocals; double-bass hammering a mile a minute; and raucous guitars that whirr and stab. Even on this track, an acoustic guitar makes a brief appearance in the mid-section, but it’s soon overwhelmed by another head-spinning guitar solo before the synthesizer and acoustic instrumental that brings the album to a close.

In this last song, true to form, Kvarforth lyrically curses his parents, himself, and the entire, defective human gene pool that has perverted the Earth.

No question, human beings have done a pretty good job fucking up our home and each other (with no real end to that in sight), but as long as human beings can create music as good as what’s to be found on VII / Född Förlorare, I think I’ll stick around a while longer.

“Människa O’Avskyvärda Människa” may not be the most artistically accomplished song on the album, but it fucking rocks. I like to fucking rock, and so that’s the one I’ve picked to stream with this review:

VII / Född Förlorare was released in Europe on May 25 by Spinefarm, and the album will be released in the U.S. during July.

More information about Shining can be found on the band’s MySpace page. The lyrics are available at Shining’s Metal Archives page, and Google Translate renders them into English pretty effectively.

Ah, fuckit, since I’ve gone on this long about Shining, might as well toss in some performance videos. The first one is the band performing the track “I och med insikt skall du förgå” from the fourth album, The Eerie Cold, live at Party.San in 2009. After that is the same song I streamed for you off the new album, performed live in Belgium last October; Kvarforth gears up for that one by snorting a line on stage.