For today’s MISCELLANY session, I picked three bands: Spearhead (UK), Dead Trooper (Norway), and Super Happy Story Time Land (U.S.). In a nutshell, the music speared me in the head, left me for dead, and made me super happy. (more after the jump . . .) 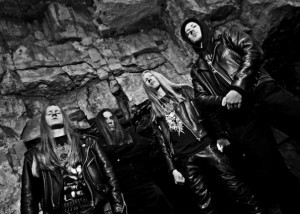 Agonia Records is a Polish label with a fascinating stable of artists I’ve only recently started exploring — beginning with a band called The Konsortium, which we mentioned briefly in an earlier post and will have more to say about soon. I’ve started following Agonia’s Facebook posts and came across this one yesterday, which included a song-stream: “Spearhead delivers new, fantastic militant Death/Black Metal performed with power, skills and solid songwritting. This will shortly become a remarkable album for extreme metal. Highly recomended!!!”

Now, when a label says that one of its releases is “highly recommended”, I do take that with a grain of salt. On the other hand, that line about “fantastic militant Death/Black Metal” did get my attention, and so I started this particular MISCELLANY expedition with the song that Agonia featured from Spearhead. Guess what? There’s truth in advertising after all!

The song I heard is called “The Lie of Progression”. It wastes no time jumping at you like a starving tiger on steroids, or some red-eyed, bat-winged thing diving straight for your head. It’s white hot mayhem on wheels, one riveting blast of furious riffage and brutalizing percussion after another. Definitely my kind of thing, and a nasty thing it is. Hear for yourselves:

[audio:https://www.nocleansinging.com/wp-content/uploads/2011/06/02-The-Lie-Of-Progression.mp3|titles=Spearhead – The Lie Of Progression]

Spearhead is from the UK, and that song appears on the band’s third album, Theomachia, which was released in May. It’s now available for download at iTunes and Amazon, and you can order the CD at Agonia’s web shop. More info about Spearhead can be found on their Facebook and MySpace pages.

By the way, I cheated on the MISCELLANY rules, which I can do because I make the rules, and I listened to the rest of Theomachia. Sure glad I did, too, because the album is fantastic. The music sounds like Anaal Nathrakh, The Monolith Deathcult, and older Morbid Angel locked in a bar fight that has spilled out into mean streets. It’s vicious and war-like, fast and filled with an atmosphere of caustic menace. It relies in part on down-tuned tremolo chords and torrential waves of blast-beats, but convulsive death-metal rhythms also play a big role, segmenting the songs into massive hammer strikes of percussive force. Part of me wanted to cower in fear, part of me wanted to dive headlong into a mosh pit.

I’m a fan of the vocals on this album, too (the vocalist, Barghest, also plays bass). His expressive, mid-range assaults of vocal abrasion keep the music right on the lip of uncontrolled violence. But even when his venom-spitting proclamations are missing, as in the instrumental closing track (a blast of corrosive ambient metal called “Aftermath”), the music is no less powerful. This is a seriously badass album. 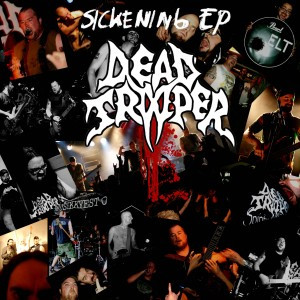 I first heard about this band from Oslo through an e-mail from their vocalist/guitarist Morten Müller, who kindly provided me downloads of the band’s three EPs released to date: Spiritual Funeral (2005), Cynicist (2009), and most recently, Sickening (2010). For this MISCELLANY listening session, I decided to hear a couple of songs from the most recent EP.

It’s a good thing I didn’t stop at one song. Truth is, I didn’t stop at two songs either, and that’s a good thing, too, because if you took any one of these songs as representative of the band’s music, you’d be making a mistake. “Sickening Serenity” is a syncopated slab of raucous, rhythmically dynamic death metal — all barking vocals, bounding basslines, martial drumming, and spinning guitar-saws. “Inner Riot” preserves that groovy style of death metal in the verses — but the surprising choruses back off the speed and feature clean vocals. It’s a mix of bestial hammering and sweeping melody that also includes a slow, dreamlike instrumental segment.

Wondering what would come next, I was greeted with a cover of a Hatebreed song called “Proven”. Dead Trooper alters the original by injecting old-school death-metal riffing and vocalization, but preserves some gang shouts and a pile-driving, mosh-worthy breakdown. What the fuck would come next? Would you believe an offering of heavily fuzzed out, sludgy, slowed-down stoner metal with more clean vocals (which are really good on this song, by the way) and short bursts of psychedelic lead guitar? I wouldn’t shit you — that’s what “Problemer Innad I Høyre” serves up (this one is a cover of a song by a Norwegian band called Black Debbath).

I had a blast listening to this unpredictable EP. Dead Trooper is a talented band which prove on Sickening that they’re capable of doing all sorts of things very well. As I said, you can’t take any song as representative, but here’s the one that lured me into listening to the whole EP:

You can order all of Dead Trooper’s releases and other merch at this location or download them in digital form at Amazon MP3. Six tracks from the Sickening and Cynicist EP’s are available for free download at Dead Trooper’s SoundCloud page (here). But we’ve embedded the player to save you a trip:

For more Dead Trooper info, here are links to their Facebook page, their MySpace page, and their blog. 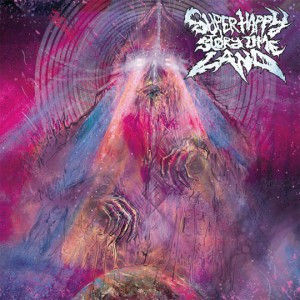 This band is from Port Angeles, Washington, they gig a lot in Seattle (and have opened as local support for lots of national tours), and I’ve actually seen them play live — sort of. I think it was sometime last year, and I’ve forgotten who they were opening for, but I was late to the venue and only caught the last song in their set. I remember more the general sense of the music than anything specific — a high-energy blast of technical, unpredictable death metal.

I’ve been meaning to track down some of their recordings, especially after getting a strong (and very funny) e-mail recommendation in late April from Travis Conquest, who’s a friend of the band and also operates the Northwest Metal Alliance. I finally got around to doing that for this MISCELLANY outing.

SHSTL has self-released several EPs, plus a self-titled album in March 2010, and it’s the album that I acquired and checked out for this post. Based on the band’s name and the titles of some of the tracks, you’d be forgiven for thinking this band was a bit of a goof, with the kind of schtick that iwrestledabearonce and Arsonists Get All the Girls adopted, at least on their early albums. That impression would be reinforced by the band history that appears on their Facebook page, which is pretty fucking funny. It would be reinforced again by the intro track on that self-titled album I started listening to, a little guitar-and-bass jingle that sounds like it’s being played on a scratched up piece of vinyl.

But then comes the album’s second song, “Homefield Advantage”, and with that I realized I needed to take these dudes more seriously. It’s a high-octane piece of death-grind with a bludgeoning low end, flashy guitar riffing, rubbery bass noodling that rises in the mix here and there, a sweet off-pace guitar solo, and a mix of death gutturals and rancid shrieking in the vocal department. Clearly, I thought, after setting straight the furniture I’d thrown around the room while listening, these dudes have got serious technical chops and little respect for consistency in tempo or time signature. Then I thought, I would like one more song please. Because I asked nicely, I gave one to myself.

The next song happens to be called “I Wanna Be A Dinosaur”, which is the answer to the question, “What do you want to be when you grow up?” Holy shit, it must be a really fast dinosaur, because this song sounds like someone strapped rockets on its back and lit them off. Somehow, it’s both massively crushing and searingly pyrotechnical — and it’s no more predictable than the song before it.

Fuckit, I thought, just one more. “Victoria (The Lady Dragon)” is the song. Damnation, it’s a blowtorch at the beginning, and then an off-speed instrumental I can only call strangely playful, and then there’s a vicious, lumbering, howling stomp, and then a return to that out-of-control, acetylene torch of an opening passage.

I didn’t stop with that song either, though I’m going to stop describing them one by one in this post. Let’s just say that the album is like a trip to a metal asylum inhabited by people with attention deficit disorder who happen to be really fucking good musicians. Really. fucking. Good.

Here’s “Homefield Advantage”. Be prepared to bang yo fuckin’ heads. In a spastic kind of way.

For more SHSTL information, visit their pages at Facebook, MySpace, and ReverbNation. Speaking of ReverbNation, here’s a widget that will allow you to scramble your brains with more SHSTL music:

And that, gentle readers, is all I’ve got for you in this edition of MISCELLANY. As always, enjoy the rest of your fucking day.