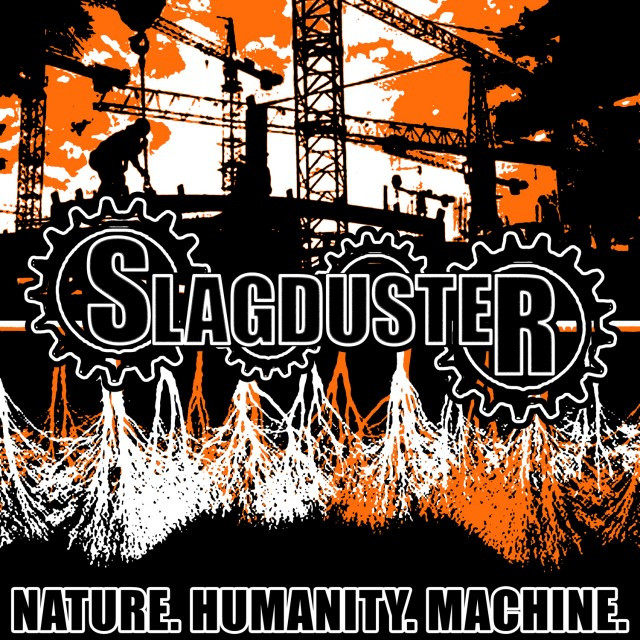 We found out about Slagduster via an e-mail from Shane Sherman, the band’s vocalist and second guitarist. Even before getting to the music, I thought the band had two things going for it — the cover for their debut album, Nature.Humanity.Machine., and their name. One-word band names are cool, and just when I thought all the good ones had been taken, here we have Slagduster. I have no idea what it’s intended to mean or how it was conceived, but it’s got a nice, nasty ring to it.

Slagduster are from British Columbia in Canada, and the album design and art were handled by Zak Waterlow, who also recorded the album and produced it with the band at Waterlow Audio Studio. He also happens to be the band’s bass player. That’s what we call one-stop shopping.

I decided to listen to the album as part of our on-going EYE-CATCHERS experiment, in which we test the hypothesis that cool album art correlates with cool music. This particular test case completely supports the hypothesis, because this is one seriously cool album — a collection of inventive, head-spinning songs played by four extremely talented musicians. I suppose it’s a type of progressive metal, with intricate arrangements and often astonishing execution. But I really hesitate to use the term “progressive metal”.

Too often, I find prog metal to be over-produced and either too pretty (particularly the kind that includes clean singing) or so wanked-out as to lose all shape as songs. Also, too many bands who hold themselves out (or get classified without trying) as prog-metal bands forget that if you’re going to append the term “metal” to your music, it needs to be heavy, as well as creatively multi-faceted. Slagduster don’t forget that for one minute. If I had to compare them with another math-metal-leaning band, it would be CiLiCe from The Netherlands (which is high praise in my book). 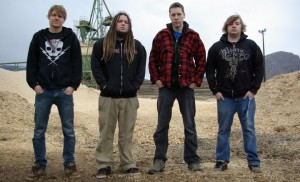 Although Slagduster’s music thrives on instrumental variation on themes within each song, with dynamic tempos and even occasional changes in time signature, the songs remain anchored to driving rhythms that organize the jumping, darting complexity of the music. Come to think of it, the rhythm section of the band is a good place to start.

I’m super-impressed by Joe Northcott‘s drumwork. The music would have sounded quite accomplished if he had simply used steady, predictable patterns and progressions to provide a rhythmic cohesiveness to all the variations being executed by the guitarists — but he didn’t. Instead, he lifts the music to an even higher level with a variety of unpredictable rhythms of his own, which somehow still manage to keep the foundational beat of each song intact. The interplay between what he’s doing and what the guitars do is one of the greatest pleasures of this album for me. And harkening back to that comment about “overproduction”, the drums sound quite natural to my ears.

In general, as we all know, bass players in metal bands get little attention and damned little credit. On most recordings, you don’t even know they’re there (though you’d certainly notice their absence if they weren’t). But Zak Waterlow — in addition to doing a fine job with the art design and the production — also turns out to be a very accomplished bass player, too. It pays to listen for what he’s doing, though naturally it doesn’t stand out as much as the other instruments. Sometimes he provides a rolling rumble of undercurrent, sometimes a chug-heavy hammering, sometimes a nimble flash of acrobatics, playing off against the serpentine winding of the guitars.

Ah yes, those fucking guitars. They can’t help but be the stars of this show, as good as the rhythm section truly is. Just listening, of course, I can’t tell who’s doing what in the guitar leads, whether both guitarists are contributing or Alex Huber is double-tracking the leads. Either way, listening to them is a sweet experience. 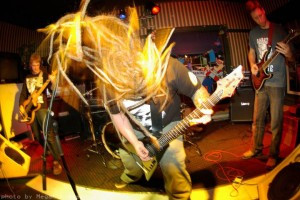 They can lay down some rock-solid riffs, but what sets the music apart are the intricate, acrobatic harmonies that the two guitars create in almost every song, perhaps most especially pronounced in “Feral Children”, where the guitars chase each other from one end of the fretboard to the other. Within songs, a core melody and rhythm ties the variations together, but along the way, the guitar leads and solo’s swirl and spin, sometimes with phrasings that are frenetic and unpredictable and distorted, sometimes with a smooth flight of clean melody. The lines can be fast and full of flash or slow and soulful.

To repeat a point made earlier, what’s especially enjoyable about all this guitar panache is that the musicians aren’t just off on a frolic — there’s serious song-craft that makes the music memorable. The guitar-driven music spins off into space, but it always coalesces again, in sync with the rhythms, in sync with the melodies that the songs plant in your head from the outset.

Keeping the music heavy — the vocals have something to do with that, too. Shane Sherman isn’t a one-trick pony in his vocals, any more than the instrumental work. He ranges between hardcore-style howling and the kind of death-metal roars that well up from the gut. To someone with my tastes, it was nice to make it all the way to the end of the album without hearing even a single bar of clean singing.

Slagduster’s debut album can be purchased in a variety of formats at their Bandcamp page (use this link), and the band has made two of them available for free at that site; those songs can also be downloaded at the band’s Facebook page (here), where you can find more info about their doings.

I’ve got several samples of Slagduster’s music to conclude this review. First, here’s the opening track on the album, “Greenery and Grey Pavement”:

Second, check out the band’s video for the album’s second track, “Silverwing Sunwing”. Gotta fucking love Western Canadians. I believe it’s true that they actually prefer to play metal outside during a wet snowfall.

Finally, here’s a music player that features a handful of songs from the album, including the two that can be had for free at that Bandcamp page: