So, as it turns out, those are video tracks for songs off of this Australian tech-death band Ouroboros’s 4-song demo titled A Path To Extinction, released all the way back in 2007.  But now, we’re seeing Ouroboros finally unleash their first full length, Glorification Of A Myth (which includes those two songs re-recorded, by the way), and I’m proud to say that this is a fine slab of tech death with a nice dose of thrash involved. 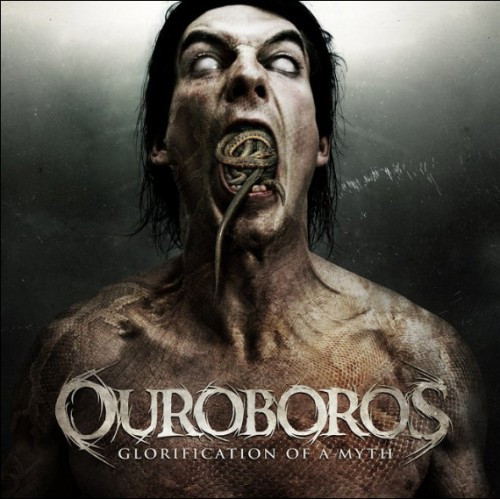 That album cover pretty much tells you everything.  You’ll be vomiting out your own entrails because the amount of intricately crafted riffs and sick solo’s will devastate you from the inside out and cause your soul to cave into itself.

The riff is indeed the name of the game here, and this album never disappoints.  You can tell that riffage was the key to the design of the music because this album’s production is definitely clarity-geared.  You’ll pick up EVERY single nuance of what the guitars are doing, but it never feels lacking in power.  The drums on this album are very crisply produced, and the bass holds the bottom end well, managing to be very present in the mix because of the low gain tone of the guitars.  The vocals are powerful yet very controlled, nothing more than a vicious growl.

How to describe the music of Ouroboros? Well, if I had to name a list of bands who channel this kind of sound I would tell you that we have something akin to a mix of Pestilence, Dark Angel, some slight Cannibal Corpse-isms, Vader, and a good dose of neo-classicism in the melodic moments.  The riffing remains quite melodic for the most part, which makes the more dissonant moments stand out quite a bit.

The opener, for example, called “Black Hole Generator”, has a SUPERB lightning-speed opening riff that bludgeons the listener until it slams into an awesome solo full of sweeping, tapping, and everything else you look for in face-melting guitar antics.  You’ll also hear some mold-breaking on here, some really cool ideas.  Take for example, “Animal, Man… Machine”, in which the chorus includes a tempo change smack dab in the middle that somehow works and, even more impressively, the song’s solo being performed over this very same part.  Going back to the song “Black Hole Generator”, the entire mid-section of it will make you want to air-guitar; killer riffage is laid down there that simply lays everything to waste, and the solo — man, does that solo rule.

Reviewing has its limits, because I truly think listening is the best way for you to gauge your interest.  I’ve given you enough info to make a decision about the next step. Now it’s time for you to check out the songs below.  Believe me, this album is just filled to the brim with taste:  Tasteful riffs, tasteful composition, tasteful solo’s, tasteful drum lines — it’s just tasty!  One of the best death metal albums I’ve heard all year so far, no questions about that.  If the opening riff to “Sanctuary” or the majority of “Lashing Of The Flames” doesn’t just get your tech-blood pumping, I don’t know what will.

4 Responses to “OUROBOROS: “GLORIFICATION OF A MYTH””