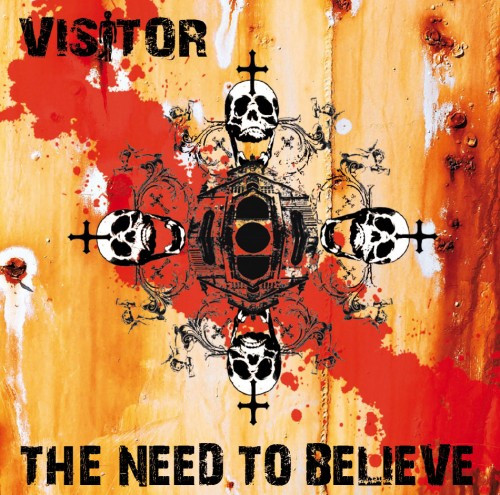 (Israel Flanders reviews the new album from a band called Visitor (UK), and has arranged for some free downloads to boot. This is one of those Exceptions to the Rule embodied in the name of this site)

I think sometimes the number one ingredient to individuality is how a band combine things that already have been done — how they select and distribute existing elements within the music and piece them together into a cohesive product — instead of straining to be wholly original.  Visitor is a band who have definitely succeeded with this formula, and I hope this review will get them some much-deserved exposure, I really do.

Visitor have a rather unique combination of sounds working in their favor.  I’d describe it as a mix of the groove metal stylings of Machine Head, mid-period Napalm Death (think Inside The Torn Apart), and All That Remains.  I don’t know how these guys make this mix of sounds work, but they make it work superbly, in a recognizable way.  I would know Visitor immediately if I heard them, I can say that for certain; they have established their individuality.

The band has just recently put out their latest effort, titled The Need To Believe, and it kicks ass.  I mean, it really kicks ass.  The energy on the record is fantastic, and the music itself is well-written.  The production is a bit rough, yes, but it’s refreshingly rough.  Adding to the feel of Visitor, which is rather hard to describe in the first place, they generate a street vibe (in the same essential way as Machine Head did on their first album), but they’re bringing that vibe into a modern context. What they do doesn’t sound out of place in the present. As a matter of fact, I would go so far as to say it’s perfectly relevant and needed in the music of more bands here in the second decade of the 2000s. (more after the jump . . .) 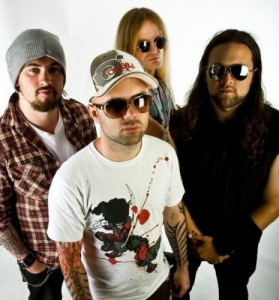 The album opens with the energetic melodic thrasher “Face Of Fear”, which definitely strikes a chord of newer All That Remains.  I love the main riff to this song — it sticks in my head quite a bit.  In this song, we’re immediately introduced to the vocal tag team of vocalist/guitarist Jim Foster and drummer Tim Marland.  I like how drastically different the voices of these two are. They’re designated to specific roles: Jim Foster provides the brutal vocals, while Tim Marland provides the clean vocals.  Both vocalists have strong, unique voices for what they are doing, but especially Tim Marland.  Jim Foster sounds like a combination of Barney Greenway and Rob Flynn in the best way possible.  The chorus in this song has a really cool stop-start rhythm and tasteful vocal interplay.

The next song is the savage “428”, which unleashes some very Anthrax-like riffage.  The chorus in this song is superb, with a powerful, triumphant emotional effect.  A really badass, heavy groove is unleashed around 1:43 before the song continues on its merry way, and that groove should get your head bobbing.  The song also includes a nifty solo — nothing too flashy, nothing that sounds like showing off, it fits the song exactly as it needs to.

This kind of pattern continues into “The Whispering”, which is a bit more intense than the previous track.  Oddly enough, despite the intensity of the song overall, it has the lightest chorus, with a really cool, bouncy feel to it that works well.  The vocal interplay here REALLY kicks some ass, with who I assume is second guitarist Gaz joining in on clean vocals.

“We Are Not Alone” steers the music into a more clearly defined metalcore route.  It opens with a very nice At The Gates-like intro before moving into a note-filled thrash riff, with impressive sweeps at the start of the verse.  This is an energetic but rather “standard”-feeling song; that isn’t meant to be an insult, though, because the song succeeds without branching out.  Jim Foster also really screams his lungs out on his track, digging the anger out and ramping up the intensity of emotion.  The song delivers a sudden tempo change about halfway through, leading to solo and riffing action that’s again reminiscent of At The Gates.

“World In Flames” displays a distinctively forceful and speedy thrash bent, completely ditching the metalcore elements.  This is one of my favorite songs, with a heavily eastern melodic base (at least as I hear the music) and oddly subdued synths in the background that give it a weird atmosphere. The song “Relentless” moves back into the more energetic metalcore style, and it’s another very solid song.

The closing track though is really something.  “9 Circles Of Hell” begins with a nice twin guitar intro that REALLY reminds me of Dark Tranquility.  It even has matching synths to boot.  A furious thrashing follows, with a brutal, grooving machine-gun verse riff verse on its heels.  This is definitely the heaviest song on the album, and also includes the grandest chorus.  The breakdown in this song is just badass throwing-it-down action.  This track concludes the album in fine fashion.  Also, be sure to enjoy the showtune whistling at the end.

To help sway you in deciding whether to buy The Need To Believe, I have included for download Visitor’s first album Paranormality (2004) and an EP called Cursed, plus two songs from the new album — “Face Of Fear” and “World In Flames”.  But first, check out these videos; they’re pretty cool, too.  The first is one of those songs from the new album; the second is from Paranormality. The download links will follow the videos.

I hope you enjoy these guys. I think they’re mighty nifty. You can find out more about Visitor at their Facebook page.