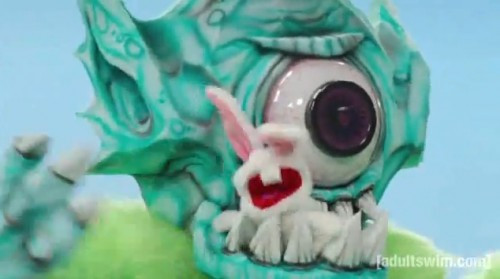 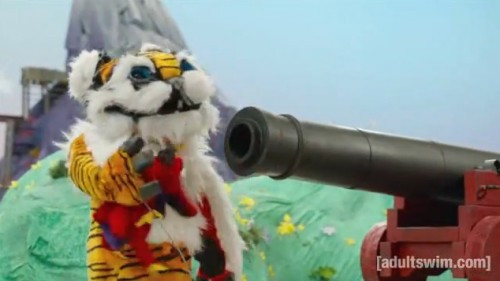 While we’re waiting for Mastodon’s next album, The Hunter, we can continue listening to Crack the Skye. I’m not talking about the songs that were originally released on that album. I’m talking about a song that was recorded at the same time but for whatever reason wasn’t included. It’s called “Deathbound”, and it’s being released today for free download by Adult Swim as part of a 10-week free singles program (this being the third week).

In addition to making the song available for free download, Adult Swim commissioned Authority Films to create a music video. Of course, they did the perfectly logical thing: They made a video featuring muppets. Isn’t that what everyone thinks of when they think of Mastodon? Of course it is! But not just any muppets — brutal muppets, engaging in non-stop, carnivorous, explosive, muppet-like mayhem.

This video is so much fun. Seriously, I laughed so hard I thought I was going to pee myself. Hang on a second. Damn, I did pee myself, just a little. I hate when that happens. I was planning on at least three more days before changing these underoos. Well, fuck, I can get two more days out of ’em anyway.

Where was I? Oh yeah, Mastodon muppet mayhem. Watch it after the jump. The new song sounds righteous, too — it’s a high-energy thrasher. And it turns out that it won’t be the only remnant of the Crack the Skye creative process that we’ll get to hear.  More on that after the jump, plus a link for the “Deathbound” song download.

First, here’s what Mastodon drummer Brann Dailor had to say in a recent interview (excerpted here) about the connection between the songs written for Crack the Skye, but omitted from that album, and The Hunter:

“When you listen to the songs, they don’t sound as ‘fun’ as we perceive them to be, I guess; it’s still pretty extremely heavy material.” He added, “We had a few songs that were kind of, not left over from Crack The Skye, but just stuff that we wanted to be on that album, but that album kind of took on a whole different thing of its own and there were a few stragglers that were super-heavy and crazy that didn’t make it, and we finally got to put them on this record. And then we wrote a whole bunch of brand new stuff. There’s, like, 14 songs that we recorded. And it’s sort all over the place — a lot of different sounds. Some straight-up classic-rock-sounding songs, straight-up death metal-sounding songs and some completely bizarre, weirdo rock songs that we’re not really sure what they are, but we love them.”

Recording of The Hunter is complete and the album is projected for an October release. The band have also disclosed some of the song titles from the album. Those of you with the psychic ability to divine the nature of music solely from song titles will have a field day with these:

And finally, HERE is the link for the Adult Swim Singles Program site where the free download of “Deathbound” allegedly will become available at some point today.

18 Responses to “MASTODON’S “DEATHBOUND”: THE BEST METAL PUPPET VIDEO EVER MADE?”