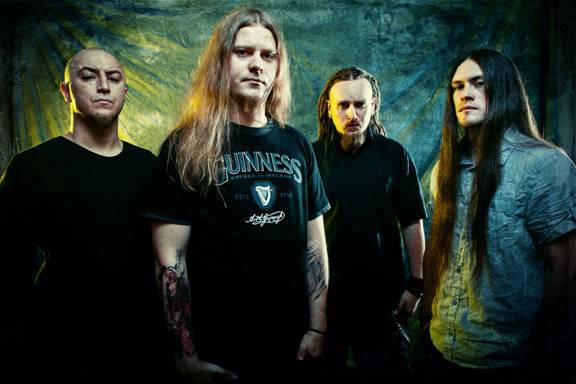 Seems to be one of those days when everywhere I turn, I see a new song release that perks me right up. This time, the band is Poland’s almighty Decapitated, and the new song is called “Homo Sum”. Before the trollers start in with moronic jokes, that’s Latin for “I am a man”, as in this line from the Roman playwright Terence: Homo sum, humani nihil a me alienum puto (“I am a man, I consider nothing that is human alien to me.”)

The song comes from Decapitated’s next album, Carnival Is Forever, which will be released in NorthAm by Nuclear Blast on July 12 and in Europe on July 15. Guitar World is exclusively premiering the song today, and even though I have the album, I won’t fuck with the label’s marketing plans by streaming it here. To hear it, use this link (and on that same page you’ll see an interesting interview with Waclaw “Vogg” Kieltyka, who possibly may be getting tired answering questions about the death of his brother Vitek).

And yes, the song is worth hearing (as is the entire album). It’s got a very cool intro, all jabbing riffs and tinkling cymbals, followed by a ramp-up in the intensity level. It’s Decapitated, so you can guess that’s it’s fast and technical, but the song also includes an extended, melodic, reverberating guitar solo that drifts almost dreamily above the rhythmic flash attack underneath. I really like this song. Go check it out.