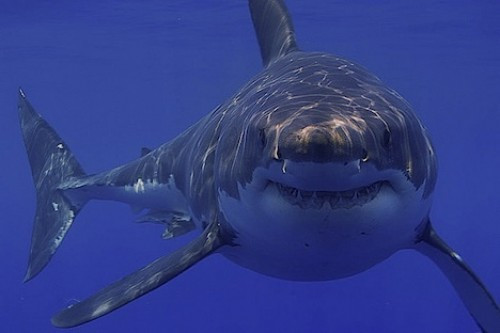 Man oh man, have we got a boffo THAT’S METAL! installment for you today. I did have lots of help — suggestions from NCS readers Ullr, ElvisShotJFK, and Phro. Lots of material, all of which are items that we think are metal, even if they’re not music (or not entirely music). So, with no further fucking around, let’s get to it:

Thanks to Ullr, I have a news report that includes all these facts:

Okay, let’s take a survey: You tell me (please) what part of this story — if any — is metal. And why AC/DC? The news report says that sharks are attracted by music in the “low frequency range”. Well, fuck, someone needs to tell Mr. Waller about Interment, or maybe some Neurosis. The fucking sharks would stop rubbing on the cage and just tear it apart and turn those tourists into sashimi.

ElvisShotJFK pointed us to a site that listed the “The 7 Most Metal Places On Earth”. Based on the written narrative at this site, I’m guessing it’s not frequented by metalheads, because it’s written in a sometimes condescending tone, as if describing weird denizens of the ocean depths (i.e., people like you and me) to normal citizens. BUT, the places they picked as “most metal places on earth” are indeed pretty fucking metal. So, I’m going to intersperse a few of these pics in this post, beginning with this one (and the accompanying narrative):

“The idea of the Earth bleeding is so freaking metal that “Bleeding Earth” is the name of one metal act, and a song by another. Proving that God is a headbanger, there is one place on the planet where the Earth spills blood from an open wound. Blood Falls in Victoria Land, East Antarctica is actually an outflow of iron oxide tainted salt water. Ancient sea water exists unfrozen underneath the Taylor Glacier, the remains of a fjord isolated by the glacier during its progression some five million years ago. The ferrous ions present in the salt water oxidise when they reach the surface, causing the red, blood-like appearance. Of course, while blood flowing from the ground is very metal, iron is LITERALLY a metal.” 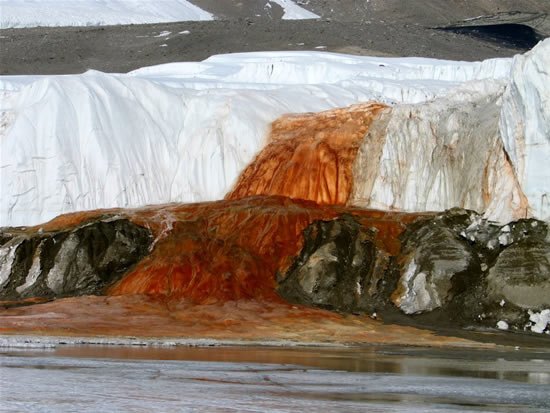 This next item came to us via our faithful, though almost completely unhinged, reader/commenter, Phro.

This is so creepily fucked-up that I don’t know whether to shit or go blind. It’s a story about a robot developed by Japanese inventors for use by dental students. Check this out:

“The robot is designed to help dental students practice, so researchers at Showa University made it as realistic as possible. That means it chokes, coughs, sneezes, moves its tongue and even gets a sore jaw. The builders worked with Japan’s leading maker of “love dolls” for adults, Orient Industry, to make the skin, tongue and mouth.”

I’m sorry, this is just wrong on so many levels. But in a very weird, creepy way, it’s also metal, particularly when it’s set to the right soundtrack. Phro suggested some Anaal Nathrakh. As he wrote, “I think this would be wonderful if someone like Anaal Nathrakh just played music over the video and left everything else as is. I’d seriously shit myself and throw my feces at passing scooters, just to affirm that reality really, truly has just gone out to lunch.” Well, I’ve only got one thing to say to that: FUUUUUUUCCCCCKKKK YEAH!

I’m not technically adept enough to substitute different sound for what’s on this video so all I can do is provide the music stream here and the video stream right below it. But I’m afraid that you’ll need to run through the video once without the AN soundtrack to get the full creepiness effect. If the video doesn’t melt your brain, then the song surely will (it’s a trve stunner).

Another of the most metal places on earth:

“Kutna Hora is home to the Cathedral of Our Lady at Sedlec and behind that Cathedral lies the Sedlec Ossuary, a receptacle for the burial of human bones. That’s pretty damn metal in and of itself, but this no ordinary ossuary. According to legend, the Abbot of the church was sent to the Holy Land in the 13th century and returned with a jar of soil from Golgotha (where Christ was crucified). The presence of the magic Jesus dirt made Kutna Hora a popular place for a burial, and thousands were buried at cemetery during the black plague.

“In the fifteenth century when a cathedral was built in the middle of the cemetery, many of the skeletons were exhumed and the task of stacking the bones was given to a half-blind monk. In 1870, a wood carver named František Rint was employed to organise the bones. We guess they hired a wood carver because bone organisers weren’t as common the nineteenth century as they are today. Rint used the thousands of bones to create macabre sculptures like the chandelier pictured here, which apparently includes every single bone in the human body.” 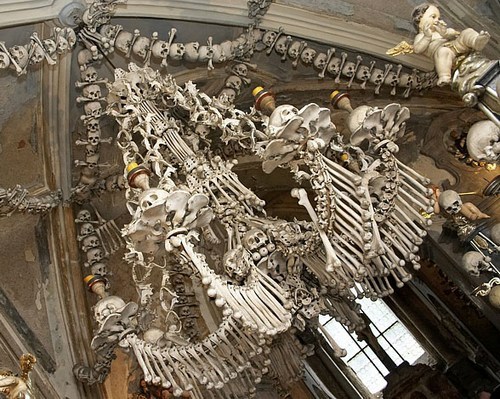 This next item is a real generational dividing-point. Once upon a time, there was no such thing as broadband or DSL or cable internet or satellite. If you wanted to get on the internet, you used a telephone line and a modem that dialed a number for your ISP. Lots of people still access the internet that way, though probably no one who visits this site does it any more. The download speeds are so slow that it’s useless as a vehicle for streaming audio or video.

But it’s not entirely useless — as my friend Ullr proved by sending me a link to this YouTube clip, in which the creator allegedly slowed down the screechy digital communication noise of a dial-up modem establishing a connection until it sounded like . . . metal.

I say “allegedly” because this actually sounds pretty fucking decent — better than I would have expected. So, this is metal, but I think it qualifies for this post because it’s not really music. It’s a digital handshake between packets of digital information and a machine.

Scott Weaver has spent the last 35 years painstakingly constructing a replica of the city of San Francisco made of toothpicks. He has managed to include a marvelous number of landmarks and neighborhoods, not laid out in geographic faithfulness to the city itself, but stacked vertically. But that’s not all. He’s also constructed the toothpick city in a way that allow marbles to roll from top to bottom in a variety of “tours” of the toothpick city.

I used to live in San Francisco, and I think it helps to know the city when you watch this video. But even if you don’t, it’s pretty fuckin metal. Really, it’s a stunning display of meticulous artistic achievement. And the next time you think of yourself as too much of a nerd? Remember Scott Weaver.