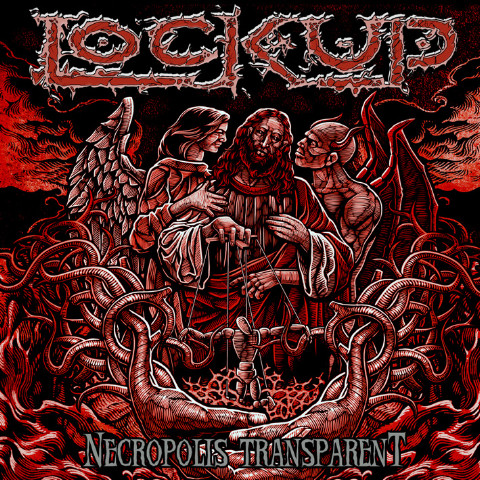 (NCS writer Israel Flanders goes crazy over the new album from Lock Up . . .)

Today is just a get-devastated-by-death-metal/grindcore-that-destroys-my-soul-and-makes-the-remains-consume-themselves-so-I-turn-into-nothing-but-a-lifeless-meat-puppet-of-abysmal-darkness day. Alright, so . . .

Lock Up. Super group that plays blackened deathgrind with thrash metal tinges, but ultimately it’s overall label would be grindcore. Contains members of Napalm Death, At The Gates, Pentagram, and a drummer who’s done his time in MANY bands. What’s my point? This album, Necropolis Transparent, is the phrase “Get Fucked” in audio form. This is an explosive cacophony of pure anger, rage, hate, misanthropy, I don’t even know if enough words exist in the dictionary to describe the pure, utterly unrestrained vitriol blasting at you on this album. Do not underestimate this band, do not fuck with them, for you shall be destroyed in their wake.

The album opens up with the grinding fury that is “Brethren Of The Pentagram”. The music is fast, makes you want to break shit, induces feelings of homicidal rage even Dahmer and Hitler would be terrified of. What’s that you say? Super groups always suck and are for nazi-loving liberal facist pinko’s who are taking our jobs? I’m sorry, I can’t hear you over the sound of how awesome this album is. There is no mercy once the first song starts. (more after the jump, including a bunch of Lock Up tracks . . .)

I’d approach this track by track, but I’m not a fag who’s going to try and establish the intricacies of a FUCKING GRINDCORE ALBUM! It’s nothing but fast and furious riffing, yelling, blasting and grinding, with breakdowns that feel like sledge hammers and a closing instrumental that has heavy doom metal vibes that really set in the mood. That’s all I have to say.

What? He’s already done you say? Yeah, I am done. This is grindcore. I don’t need to write a dissertation on a bad-fucking-as-fuck-shit-ass album that prides itself on short, self-contained bursts of getting fucked.

Oh and the album art is pretty sweet.

EDITOR’S NOTE: Nuclear Blast released Necropolis Transparent in Europe on July 1 and it will be released in NorthAm on July 12.  Nuclear Blast is accepting orders for the album, plus other merch, at this location. Now, here are the tracks Israel sent our way . . .

5 Responses to “LOCK UP”