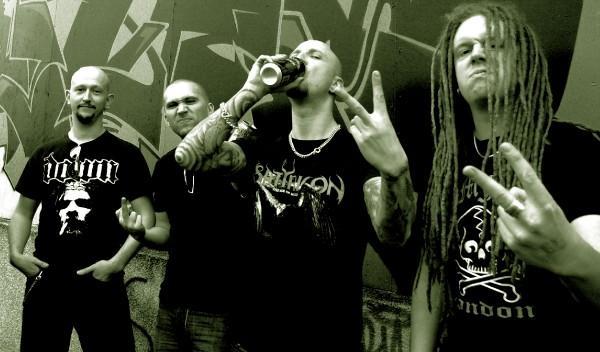 I just took my usual mid-day break at work to check up on doings in the world of metal, just to see if something earth-shaking had happened while I was droning away, something that would be of such vital interest to NCS readers that I’d need to post about it. No such luck. But I did find this (thank you Blabbermouth):

Guitarist Tim Carley of U.K. punk-infused death metallers THE ROTTED severed the top of his finger yesterday (Wednesday, July 6) when a 60-kilogram flight case fell on it from a van. Tim received treatment in hospital to remove the damaged parts of the finger, including the nail and the torn flesh. The doctors then sewed the remaining parts back together. The incident has left the top of Tim‘s bone unattached to the rest of his finger, which the doctors have said in time will heal.

In a statement, Tim said, “The doctors have told me it will take at least 10 weeks to heal. When I asked her if I could still play the guitar, she replied ‘I’ve heard your records, and to be honest, I can’t see this making much difference.’

Laughed my fucken ass off when I got to that last sentence. But wait! There’s more, including video!  (after the jump . . .)

To continue with Fingerless Tim’s statement:

“The rest of the guys in the band call me Timmy Iommi because of the riffs I wrote for the new album. Today, I got one step closer to walking in the great man’s shoes.

Nice touch there with the Tony Iommi reference (Iommi lost the tips of his middle finger and ring finger on his right hand — his fretting hand — while working in a factory as a teenager.)

“Unlike half the musicians in metal magazines, I’m not a moaning little girl, so I’m playing Obscene Extreme, Dong Open Air and Bloodstock with three fucking fingers and there’s nothing that fate, karma and all the other bastards that mock me can do about it. The power of d-beats, blast beats and heavy metal shall never die!”

The accident happened at 11 a.m. and by 7 p.m., Tim was back home and rehearsing for the Obscene Extreme festival, which the band will appear at as scheduled this Saturday.

Ballsy. Oh, and in case you’re wondering which fingertip Tim lost, the Blabbermouth story didn’t say. However, it did include this video filmed by Tim’s wife, and so I had to watch it just to find out. I found out. Fucking gross at the beginning, so be forewarned. (Unlike Tim, I react to this kind of imagery like a . . . well . . . like a moaning little girl.)

Yeah, so that’s the bloody metal news of the day.

Tim is now working for tips.

How about some music by The Rotted, just to finish off this post? This official video is for a song called “Nothin’ But A Nosebleed”.

Which will henceforth be re-titled, “Nothin’ But A Hangnail.”

See if you can spot Tim.

13 Responses to “NOW, IF HE HAD LOST HIS MIDDLE FINGER, IT WOULD HAVE BEEN A PROBLEM”