(Israel Flanders returns with his second review in as many days . . .)

Here we are again reviewing a death metal album. This is the debut album of Dutch death metallers I Chaos called The Human Repellent, and it is a solid slab of speedy technical mayhem. I’d wager to sugg- wait a fucking second. Why am I talking like some pompous suit-and-tie wearing asshole? This is a metal review.

Alright, so if your face wasn’t already sufficiently raped by the serpentine riffng, the technical, syncopated drum assaults, the abysmal hoarse howls of death, and some kick-ass groove as an underlying foundation, just remember, there are 9 more servings of this on the album. NINE MORE SONGS OF BEING SKULL-FUCKED BY BRUTAL INHUMAN PRECISION!  (more after the jump . . .)

It should be noted before we begin this that, as mentioned in a small feature that appeared on this site earlier, this band includes drummer Koen Herfst and bassist Joost Van Der Graf of defunct Dutch band Cypher. It seems like everything any of these Cypher guys touches instantly turns to gold, because you can attribute a good deal of what makes this album as excellent as it is to the drumming and the fact that the bass is either keeping up perfectly with the guitar in all its acrobatics or deviating from it tastefully.

Yes, the riffs here are good. Boy are they fucking good. The sound of this band is very much a mesh of the more techy aspects of Lamb Of God and the blasting fury of Sotajumala. It works very well, and I am rather surprised that this album ends up feeling not the slightest bit derivative.

I mean, look at this album cover. LOOK AT IT! 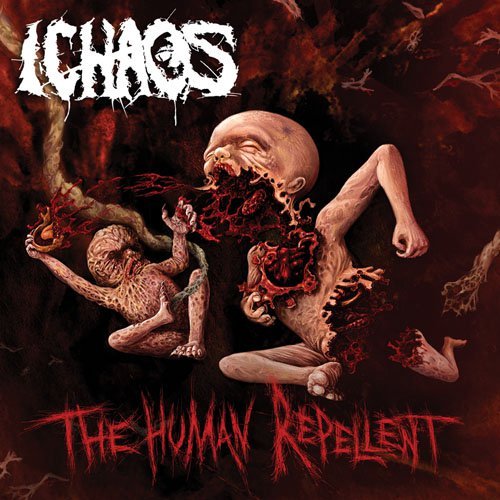 If this doesn’t scream “brutal tech-fest rape machine” to you, I really don’t know what will, except maybe if you like shit such as “Three guys and a hammer”. Don’t look it up. I did. I’m still crying.

The riffs of guitarist Rory Hansen really do drive the music home. The dude is always moving, always transitioning, always mixing things up, whether it’s thrashing, tremolo picking, or palm-muting chunk, the dude keeps his riffs diverse and interesting. As I described earlier, they’re very serpentine in nature and feel like they are winding around you. The grooves that they sink into are merely the snake choking the life out of you after it’s left you dazed and confused. 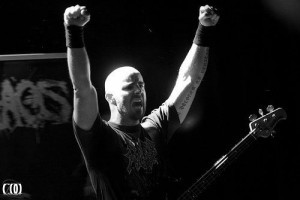 There will be some people who are going to feel that what this guy is doing is nothing special, but to paraphrase my good friend Anthony Fantano when he reviewed Havok’s Time Is Up, it’s kind of like juggling. The art of juggling is ancient, but if you came across someone juggling grenades and chainsaws, would you seriously just be, like, “Pft, juggling. It’s so old. It’s been done. Whatever”? I think you’d be full of shit if you did.

Hansen’s solos also have a good amount of flair and taste to them, but he never really shreds; he obviously writes these solos for the sake of the songs and not as grandstanding for the show of skill, which I really appreciate.

Koen Herfst’s drumming is something to behold, and as time rolls on, he’s quickly becoming a favorite of mine. This man has a distinctively syncopated and accent-heavy style that gives the bands he’s in a solid, unshakable groove, even during the most speedy and blasty of sections. He really helps this album along as he counterpoints with the riffs SO excellently that it’s hard to believe this is this band’s first album. The music displays the kind of tight, concise, cohesion that only vets would be expected to have. 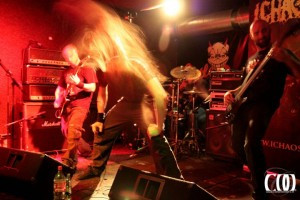 Joost Van Der Graf, as I mentioned, really spices up things, mostly in the passages where he completely deviates from the riffing, or shows off moments of tapping and sweeping flash. He knows what’s needed for the foundation, and what isn’t, and that shows the mark of a bassist who knows his shit for sure.

Vocalist Harry Van Breda channels the vibe of a much more brutal, more more lethal Randy Blythe and really hits home here. There isn’t much diversity to his vocals, but honestly, it’s hardly needed when you’ve got a broad sword as devastating and hard-hitting as his.

There is not much more to say. I really think these guys got “the stuff” working in their favor. This is solid, hard-punching, flesh-ripping tech death that’s concise, to the point, unrelenting, and enjoyable as a whole. Do not let this slab of sonic punishment pass you by.

5 Responses to “I CHAOS: “THE HUMAN REPELLENT””