(NCS guest contributor Phro delivers this . . . uh . . . unusual look-back at an unusual album. Make sure you’re not eating or drinking while reading this, unless of course you LIKE having liquids and partially chewed food explosively ejected through your nose.)

I’m gonna go ahead and start this by just linking you to Wikipedia (http://en.wikipedia.org/wiki/GISM).  I’ll wait.  It’s kinda important. 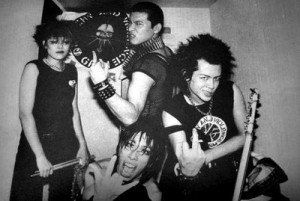 I’m not gonna tell you it’s a pants-shitting-anal-leakage-causing-star-seeingly stellar album.  (It’s probably not.)  Nor am I gonna tell you it’s a bad album.  (I’m hardly qualified to pass that sort of judgment on anything.)  But I’d like to introduce it for two reasons.  One, the music is…strange.  And, from a historical standpoint, I imagine that at least one other person who reads this site will be happy to at least know about it (if they didn’t already).

The second is that, despite what I said previously, I do think the music is also legitimately good—though it is as muddy as a fat woman crapping diarrhea down her leg while it mixes with period leakage.  I realize that’s a fuck-awful way to describe anyone’s music, but I think it applies (in a loving way) here.

I should mention that I do not own this album.  In fact, I’m not even sure if one could actually buy it at this point except from some creepy Ebay auctioner with half a hard-on and the remains of his child prey scattered around his apartment.  That’d be the only person crazy enough to let go of this gem.

Okay, so what’s so fucking special about this music?  So far, I’ve compared it to bloody diarrhea and creepy Internet pedos.  (The word pedo makes me giggle.)  Well, that’s exactly it. 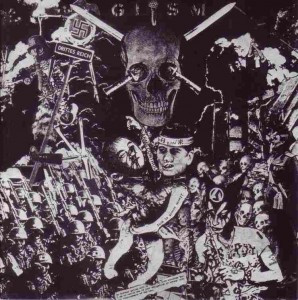 In the extremem metal scene, there’s lots of dwelling on the shittier, stranger, more fucked-up parts of humanity.  Well, this band is, as near as I can tell, attempting to put all that shittiness and strangeness in a blow-up doll and then fuck it with a chainsaw.  The guitars are played reasonably well, but distorted and tuned so as to make the notes melt together like that one time you took acid and your hand was, like, totally melting while you jerked off into that cop’s tailpipe, dude!  (Fucking druggies, get off my lawn!)

The drums, played perfectly on time (as near as I can tell), sound like someone forgot to tell the drummer that you can tighten the skins.  As for the bass, it is as fat as a sack of liposuction waste.  Maybe fatter.  More like Oprah than Martha Stewart anyway.  (By the way, I’d gladly pay top dollar to watch those two fight to the death while DETESTation plays in the background.)

My point, in case I haven’t explicated it properly by this point, is twofold.  One, the production and distortion are just atrocious and murky—like good grindmetalpunkcoreshitfuckmusic should be.  Two, it’s on purpose.  These guys can play their instruments.  They know what they’re doing.  If it sounds like black vomit splattering on hard pavement, then that’s what it’s suppose to sound like.

Now, the vocals.  This is where the band really shines (like a bloody, half-rusted, steel dildo).  The vocalist sounds like he’s seriously pissed off because someone stole his Shitty-O’s and replaced them with Frankenchocula.  Like, from right under his nose.  BUT!!!  Not only is he missing his breakfast food of choice, someone also seems to have injected napalm directly into his dick with a 12-guage needle.  He alternates between tortured screaming, old school raspy growls and something that sounds like the Joker (yah, the supervillian from Batman, but not the new one, the Jack Nicholson one) cackling as he masturbates over the shattered remains of the David.  It all works to horrific effect. 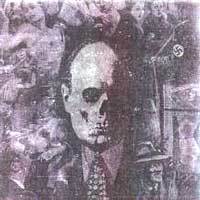 I’m not going to go through the album and tell you what each song sounds like.  I’m not particularly good at that, and I think you’re better finding out on your own.  I will let you know that the final track has a long section of silence and then some hidden tracks that sound pretty much like the rest of the album stylistically.  The first one is a bit fuller and almost melodic.

Now, go set a fucking businessman on fire with a can of hairspray and a lighter.