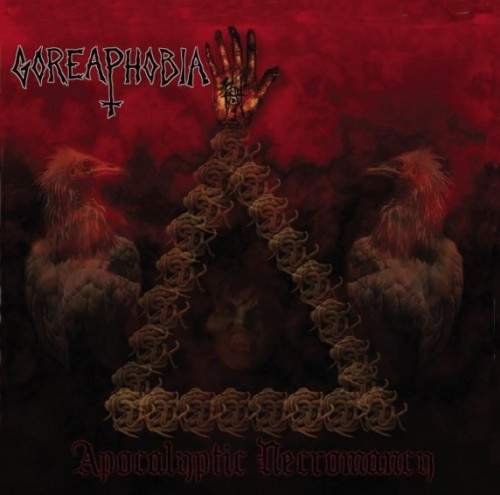 Goreaphobia is a Philadelphia-based death metal band with deep roots in the death-metal underground. Not long ago, we saw the news that the band had joined up with the Dark Descent label for the release of their new album, Apocalyptic Necromancy. It’s scheduled for release on August 9, and it features the band’s new guitarist, VJS (Kult ov Azazel, Crimson Moon, Demoncy).

It also features that awesomely eye-catching piece of cover art above, created by Linsey Wasiuta.

Today, Decibel premiered a track from the album called “Xurroth Rreeth N’ves Helm”. I nearly swallowed my tongue trying to pronounce that. I found it easier to use the English translation that appears in parentheses next to that title — “City of Rot and Decay”. And don’t ask me from what language the title words are drawn, because I have no fucking clue.

What I do know is that the song is an absolutely monstrous delight. Goreaphobia guitarist Alex Bouk describes it thusly: “This is one of those songs that just came very easy. To me it has a Venom meets Iron Maiden-type feel to it. This is more of a straight heavy metal track. It sounds like nothing else on the record.”

Well, I sorta hope he’s wrong, because the song is a killer — gore-drenched vocals paired up with a slaughterhouse full of riffs, a filthy guitar solo, and a hard-rockin’ beat. I’m definitely now stoked to hear the rest of this album. Go bang your head at Decibel and let us know what you think, won’t you?

17 Responses to “I CAN’T PRONOUNCE THE NAME OF THIS SONG, BUT IT’S FUCKIN’ KILLIN’ ME”