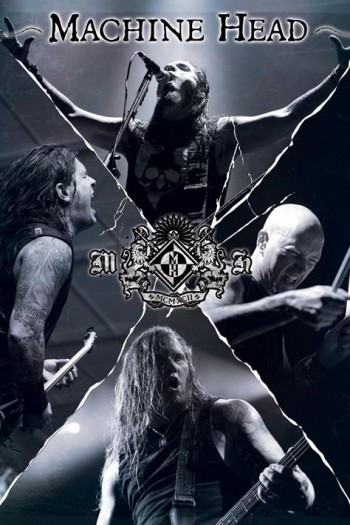 I’m pretty pumped up about Machine Head’s new album, Unto the Locust (due in September on Roadrunner). The first single, “Locust”, sounds good, and — well — it’s fuckin’ Machine Head. But in addition to being excited, now I’m also curious.

Thanks to Blabbermouth, I watched an interview that Machine Head vocalist/guitarist Rob Flynn gave to Nikki Blakk of the San Francisco, California radio station 107.7 “The Bone” at the second show of the Rockstar Energy Drink Mayhem Festival on July 10 in Mountain View, California. At one point, Blakk asks Flynn what song on the new album is his favorite. There’s a pause, and then he tells a story about the creation of a song called “The Darkness Within”.

He calls the song “pretty left-field for us” and says “it’s gonna be a song that just flips people on their heads.” Flynn continues: “it’s a very dark song, and it’s a really good song. I think it’s maybe one of the best songs we’ve ever written, and I’m really proud of it.” There’s also a hint that it may have some “mainstream” appeal.

Okay, so I was intrigued by that.  I got more intrigued when he explained how the song came to life. Each song has its own story, no doubt. Each songs comes from someplace in the mind and experiences of a musician and a lyricist. This song seems to have had part of its genesis in a Jeff Bridges performance in the movie Crazy Heart.  (more after the jump . . .)

I love that movie. The only time I’ve attempted a movie review for NCS, it was about that movie (and fuckit, I’m still pretty proud of that review, even if I’ve never done another one). So, hearing Rob Flynn talk about drawing some Machine Head inspiration from Jeff Bridges playing Bad Blake playing a song in the movie — that got me even more interested in “The Darkness Within”.

“Our drummer, Dave [McClain] had written this really cool, kind of PINK FLOYD-style acoustic riff, and I loved it, and I was just jamming on it one night.

“I had just watched that movie ‘Crazy Heart’ and they had this one song that was kind of like, the dude was singing in this [lowers his voice] croaky cigarette voice like this. And I was just jamming along, strumming just random words… I was thinking in my head, ‘If I ever record this song, I’m gonna drink a pint of vodka and smoke half a pack of cigarettes while I’m tracking it.’ [Laughs] I didn’t really have lyrics to it.

“And the next morning, it was in February, so we were having all those rains and it was freezing. I dropped my son, Wyatt, off at pre-school. And it was just the perfect miserable day — it was pouring rain and cold and gray. I live kind of in the hills and so there was all this fog pouring over the hills. And I just sat and I parked. And I was like, ‘Alright, let’s see what happens.’ It was like being in an H.P. Lovecraft poem or something.

“At first I started writing all these lyrics — I just pulled out my iPhone and started typing in the notes — very Lovecraft-ian [words like], ‘feted branches and spider webs and whippoorwills’… And then it kind of took on this turn where it just kind of went into how much music has meant to me in my life, that it’s basically carried me through my darkest times and what it means to me.

“For about a half an hour I just sat there typing stream of consciousness and it [turned out to be] probably one of the most prolific writing sessions of my life. And I just basically wrote the whole song right there. And then I came home, had another melody for the chorus, and I dumped out the lyrics there and I put it together. And I called up Dave — we weren’t supposed to practice — and I was like, ‘Dude, I freaking wrote this amazing song. I wanna jam it with you.'”

And there you have it. I hope this song turns out to be as interesting as it sounds. Machine Head certainly have the capability to create dark, interesting metal, in addition to some pit-inducing thrashers. I know we’ve got some song-writers out there — if you feel like sharing where you get ideas for music or lyrics, by all means leave a comment.

I’m not sure which of the Crazy Heart songs Flynn is talking about. If it put him in mind of something dark, I suppose it could be “Brand New Angel”. Or possibly “The Weary Kind”, even though I don’t remember that song making its appearance until the end credits start to roll (and it’s Ryan Bingham singing the song then, instead of Bridges).

What the fuck, I’ll put both of those songs up here for listening purposes, right after the Flynn interview (except I found a clip of Bridges singing “The Weary Kind” on tv). Adios, motherfuckers.

11 Responses to “WHERE DO SONGS COME FROM?”